Well, apparently "two days" meant "a whole lot more than two days", but we're back with more Imported Thoughts on the S.H. Monsterarts line!  If you recall last time, we gave you a brief history of this great figure series.  Now it's time to focus on the Present and the Possible Future of Tamashii's Godzilla/Monster themed figure line.  This section of the feature will focus on the current releases and those up for pre order.

The most recent S.H. Monsterarts releases have focused on figures from the final film in the Heisei (or Versus) series, Godzilla vs. Destoroyah.  But what is a film (or a proper toy line) without the Big Bads?  How do you define the heroes (and anti heroes) without the villains?  Luckily, Tamashii released the film's ever-evolving villain, Destoroyah, in his towering Perfect/Final form! 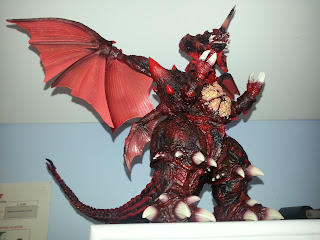 Destoroyah is an impressive piece, to say the least.  To call it "Art" wouldn't be an exaggeration in the slightest.  Here's my full write up:  http://importingmonsters.blogspot.com/2013/03/review-sh-monsterarts-destoroyah.html 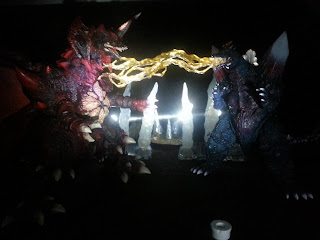 Now it's no secret that S.H. Monsterarts is a Godzilla dominant figure line.  So it came as a pretty big surprise when the first Western monster was hinted at!  Speculation ran wild, as did debate as to which monster would be made first.

Flash forward to New York Comic Con 2012, where Bluefin's booth had a BIG surprise...  The first S.H. Monsterarts Western monster was none other than the father of the franchise:  King Kong!  The giant ape was modeled after his 2005 Peter Jackson incarnation, and stood atop the unfinished Empire State Building with Ann Darrow clutch in his damn, dirty fist!  What a display! 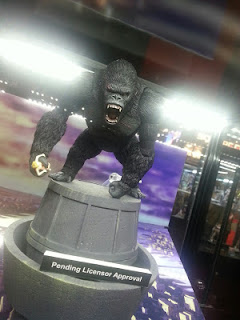 A while seemed to pass and fans wanted to know...  Where was Kong?  Had he perhaps fallen off the Empire Licensing Building?  Finally, preorders and the much awaited promotional shots appeared.  There were a number of new faces and hands, even one brandishing a log!  One accessory was strangely omitted:  Ms. Darrow failed to make a return appearance.  So the question remains:  Was Ann canned?  Was it back to the streets for the starved dancer?  According to the official word:

"Accessories such as wood branch/trunk also included. In addition a small figure of Ann Darrow which Kong can gently grasp will be included!" 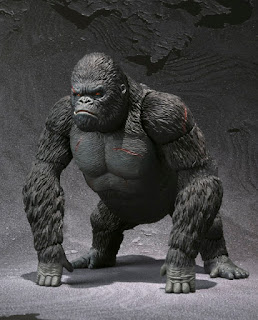 Back in November 2011, fans were shown this prototype:

It was none other than the juvenile Destoroyah!  This raised a lot of questions:  Where was Adult Destoroyah?  Will we get the other forms such as the Flying Form?  Why is Destoroyah one solid color?  Unfortunately, collectors would have to wait more than a year for the answer.

Well it turns out that the paint scheme hadn't been finalized.  Some time after Destoroyah Final Form was revealed, a new multipack was announced...  The Destoroyah Evolution Set! 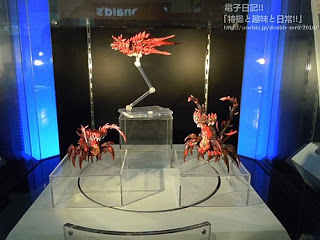 There are three forms in the set.  The first is the smaller, swarming Crab.  This figure is sculpted by master Godzilla sculptor, Yuji Sakai! 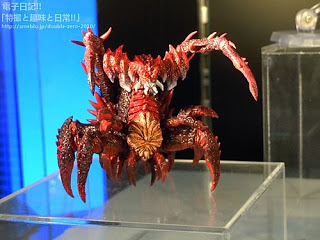 The second should be more than familiar to those who have been following the line.  It's the Aggregate Form, which made it's debut way back in November 2011!  As you can see, there have been significant improvements in the pain scheme!  This figure is excellently rendered by Shinichi Wakasa!! 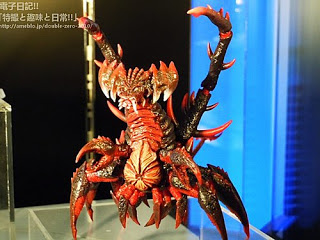 Last, and certainly not least is perhaps the most exciting part of the set...  The never before released Destoroyah Flying Form!!  Also sculpted by Shinichi Wakasa, this is definitely a highly anticipated release!! 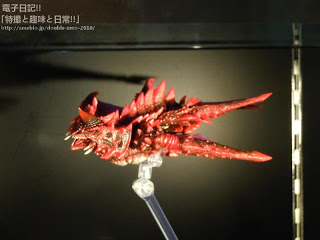 Beyond the Destoroyah Evolution Set, the future of S.H. Monsterarts was once again in question.  Would they continue with more Heisei/Versus series monsters like Biollante or Battra?  Would they take a break from the line?  Would they perhaps move on to the Angels from Evangelion?  It turns out that the answer was an even bigger surprise... 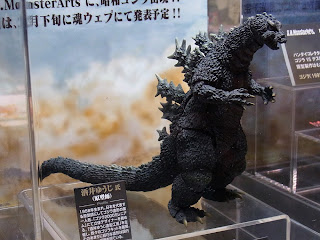 It was none other than the prototype for the next S.H. Monsterarts release:  Godzilla 1964!!  Displayed at Yuji Sakai's booth, it featured excellent sculpting (as usual), and was a dead ringer for the actual suit.  The collector forums were on fire with discussion!  Finally, S.H. Monsterarts was delving into the Showa series of Godzilla films!  The possibilities were endless!  The eager wait began for the solicitation information...

When the Solicitation info arrived, collectors were in for a few more surprises. 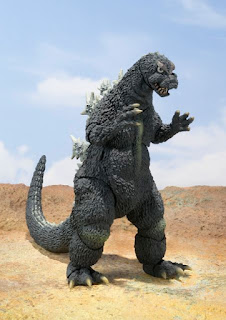 The first was a triangular joint, then purpose of which remains a mystery: 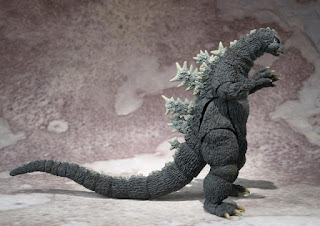 The second was the revelation that Godzilla 1964 would be a web exclusive in Japan.  How odd, when it was the first release from the iconic Showa era...  And one of the most popular incarnations to boot!  The final (and perhaps the most exciting) surprise was the information that S.H. Monsterarts Godzilla 1964 would be released in the same month as Japan!  A simultaneous release hadn't happened since the first figure in November, 2011!

With the revelation of the very first Showa entry, the door for future possibilities in the S.H. Monsterarts line was blown wide open!  The series was always a magnet for wild fan speculation, but now a whole new group of fans began to show interest.  So what direction would the line head now?

If indeed this is the beginning of a whole slew of Showa monsters, a few candidates stand out more than others, mainly because they were the top Showa choices on an open poll on Bluefin's facebook page.  However, one monster that wasn't a big winner on the poll stands out as well...

Going by past entries, the next logical figure would be Mothra 1964.  Tamashii tends to do characters one after another in film related "waves".  Granted, there were exceptions (such as MechaGodzilla and the Destoroyah Evo Pack).  but these were few and far between.  Looking at the standard model for Monsterarts releases the benevolent insect seems likely. It helps that Mothra 1964 is a popular Godzilla foe from a fan favorite Godzilla film (1964's Mothra vs. Godzilla).  Since the beginning, she has been a shoe-in for the line. 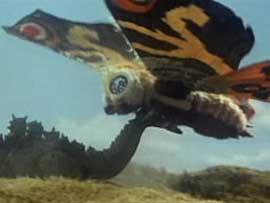 Personally, I would love to see S.H. Monsterarts go back to including accessories with their figures.  And one excellent accessory that could be included with Mothra is her tiny, iconic larva.  As a small, segmented caterpillar, the Mothra Larva would essentially have the same articulation as a tail.  Perhaps an alternate head attached to a section of Godzilla's tail could also be included, to simulate the scene when the Mothra Larva bites Godzilla's tail! 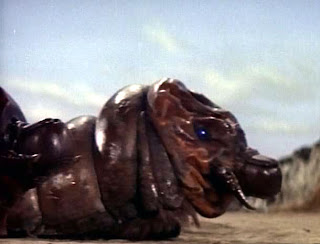 One monster that has always been popular with Western Godzilla fans is the amphibious dinosaur, Titanosaurus.  Featuring a unique look and a strange but distinct roar/cry (described often as the scream of a drowning elephant), this monster was a throwback to Godzilla's earlier foes.  He had no lazers, no robotic parts.  His fighting style was strictly tooth and claw oriented.  He wasn't from space, but was a survivor from the dinosaur age (like many 50s and 60s Toho monsters).  Teamed with Mechagodzilla 2 and controlled by a cyborg, Titanosaurus laid waste to Tokyo...  until the Monster King himself intervened! 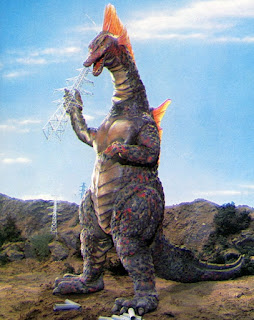 A possible accessory for Titanosaurus (and the one that makes the most sense) is a swappable tail  part.  This would mean that Titanosaurus could be posed with both an open and closed tail fin, to simulate his hurricane wind attack!  Other possibilities include swappable neck parts for swimming poses, and an in-scale model of a submarine! 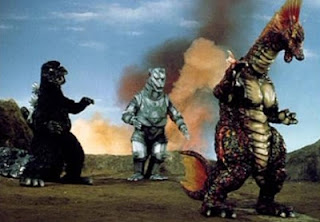 Mechagodzilla, Godzilla's mechanical doppelganger, has been a thorn in the atomic monster's side since his debut in the 1974 film, Godzilla vs. Mechagodzilla.  Boasting the most impressive arsenal of any of the Showa villains, the robotic menace managed to reduce the King of the Monsters to a bloody mess.  Considered to be one of Godzilla's most popular villains, Mechagodzilla is an obvious choice for the S.H. Monsterarts line. 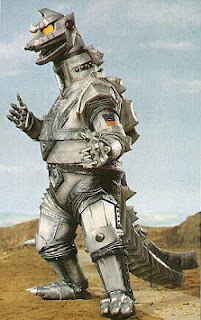 Mechagodzilla should include a plethora of accessories.  Beams, alternate, "fired" hands, an alternate neck piece for flying poses, and (depending on which version is portrayed) his exposed robot brain are of course the most obvious/appropriate options.  Being a mecha, die cast should be incorporated into the design.

Although Revoltech already released a Gigan 1972 in their Tokusatsu line, fans are still clamoring for an S.H. Monsterarts version.  The sadistic kaiju is certainly a colorful character, with a rather striking design.  Die cast is an attractive option, giving the various mechanical parts a realistic feel.  As one of the iconic Showa villains, Gigan would make an distinct and colorful addition to the S.H. Monsterarts line. 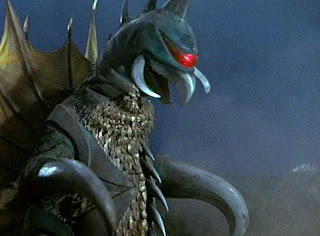 Like Mechagodzilla and M.O.G.E.R.A. before him, S.H. Monsterarts Gigan should come with an alternate neck piece to simulate flying poses.  Another possibility would be a swappable "moving" saw blade that could plug into his chest. 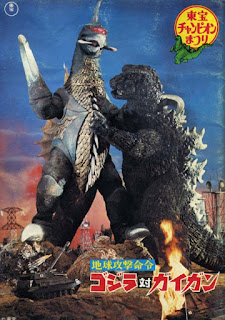 More than just a pale Ultraman rip off, the perpetually grinning robot Jet Jaguar struck a chord with many Tokusatsu fans in the West as well as the East.  With his odd growth powers, his martial arts prowess, and his bright color scheme, he is truly unique among the various mutant dinosaurs and giant insects in Toho's stable.  His articulation would be much simpler than many other S.H. Monsterarts figures, and would likely mirror the style of the Ultra-Act Ultramen or the S.H. Figuarts Kamen Riders.  Of course die cast would be essential, as Jet would need it in his ankles to hold one legged poses.

S.H. Monsterarts Jet Jaguar's accessories should include various swappable hand parts and a flying stand.  The hand are especially essential given Jet's fighting style.  Punching, chopping, and grabbing hands are an absolute must!

Biollante and Godzilla 1989
In the aforementioned open S.H. Monsterarts poll that Bluefin held, one kaiju stood head and shoulders (and  vines!) above the rest:  The massive plant monster, Biollante!  However, even though she was the Toho monster with the most votes, fans were skeptical  about whether or not she would be made.

There was a massive push on Facebook regarding the character.  Fans wanted word of whether or not they'd see her in the line.

Fast forward to Tamashii's 5th Anniversary event, where devotees were in for a huge surprise:  A giant S.H. Monsterarts Biollante prototype made its dramatic debut, in a diorama ripped straight from the film!  And she wasn't alone.  Confronting her was a fantastically rendered prototype of her nemesis, Godzilla, in his fan favorite 1989 incarnation! 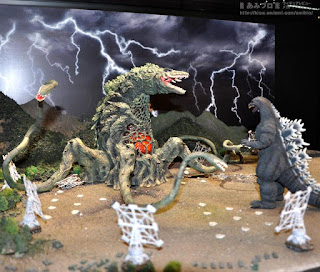 The Biollante prototype, while excellently detailed, was met with immediate fan criticism.  The pictures from the event showed that while the figure looked good in profile, it was rather thin from the front.  Many questions were raised:  Was this a rough prototype?  Was the figure's neck stretched out, giving it a thin appearance?  Would the input of fans be heard? 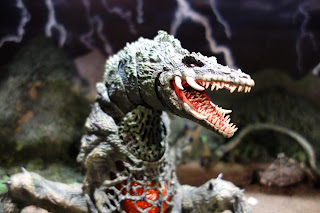 Love this prototype or hate it, the sculpted details are incredible.  The jaws look amazing, with numerous individually sculpted teeth.  Tamashii was definitely on the right track with this figure, and with a few revisions, this could be the best Biollante on the market!

So where are Biollante and Godzilla 1989 now?  Well, unfortunately their debut has also been their only appearance thus far.  Will they eventually be released? Only time will  tell. 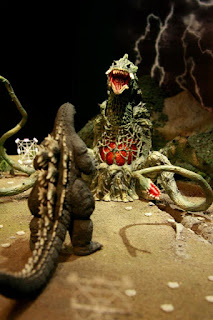 While the future of the S.H. Monsterarts toy line is uncertain, numerous questions are on fans' minds.  Will popular Showa beasts like Anguirus eventually be made?  Will more obscure monsters like Varan and Gorosaurus have a shot at highly detailed and articulated figures?  Will monsters outside of Toho's stable get the Monsterarts treatment?

One non Toho monster in particular stands out above all others:  The super turtle, Gamera!  One of the iconic Japanese monsters, he deserves a figure in the ultimate super articulated monster line.  His 1999 incarnation seems ideal, since the Showa, 1995, and 1996 versions were already covered by Kaiyodo's Tokusatsu Revoltech line.

His accessories should include effect parts like swap-out exhaust for flying mode, and his trademark fireballs.  And, of course...  Plenty of turtle meat! 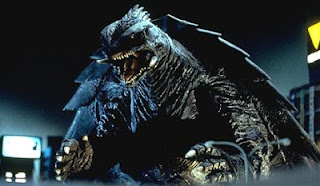 Well, I hope you enjoyed our retrospective/anaysis/predictions regarding this amazing toy line.  Feel free to comment below if you disagree, or if you think we missed something.
Posted by Unknown at 11:38 PM