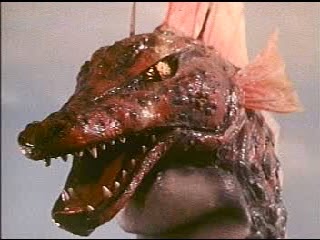 Why Tamashii Nations Needs To Release An S.H. Monsterarts Titanosaurus In 2015

I'm gonna get something out of the way right off the bat.  I am NOT a neutral party.  Titanosaurus has been my second favorite monster for as long as I can remember, and it's no secret that he's at the top of my personal wish list for this line.  That being said, I firmly believe that Titanosaurus is the perfect figure to re-launch the Showa era sub series in 2015.  Why do I believe this?  Read on and find out... 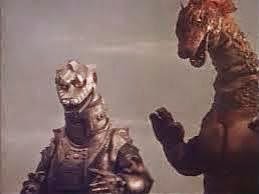 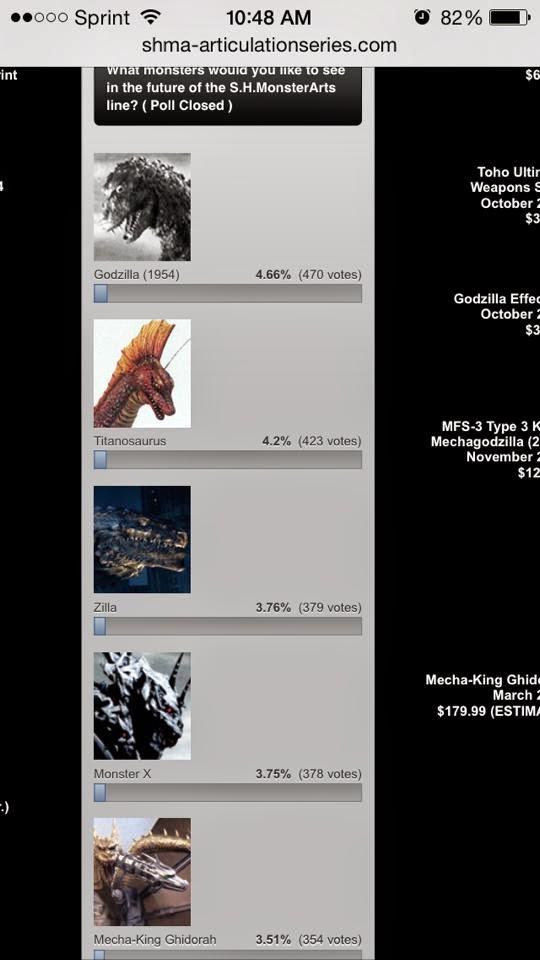 Be it his sympathetic back story, his unique cry, or his distinct, dragonesque appearance (or some combination thereof), Titanosaurus has certainly struck a chord with fans in the West.  As a candidate for a figure release, he's surprisingly strong.  In a recent poll on the Articulation Series web site, Titanosaurus easily nabbed the #2 spot (trailing Godzilla 1954 by a mere 47 votes).

The full results of this poll can be seen here:
http://www.shma-articulationseries.com/vote-2014.html
Looking at the poll results, it  seems likely that he'd sell extremely well as a regular release through Tamashii's Western distributor, Bluefin.  An S.H. Monsterarts poll held by Bluefin in May of 2012 yielded similar results.  Titanosaurus placed 10th overall

Despite not appearing in a new film for almost forty years, Titanosaurus  has been featured prominently in Western Godzilla media in recent years.  This has helped to keep the monster fresh in fans' memories. 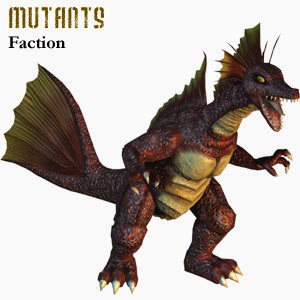 In 2007's Godzilla Unleashed for the Wii video game console, Titanosaurus appeared as a playable member of the "Mutant" faction.  This version of the character varied drastically from the one that appeared in Terror of Mechagodzilla.  Rather than a tragic, misunderstood beast, Unleashed Titanosaurus was power hungry and vengeful.  Even stranger, he now sported a beam weapon.  Whether you agree with the changes the game developers made or not, his inclusion in Godzilla Unleashed certainly didn't hurt Titanosaurus's popularity. 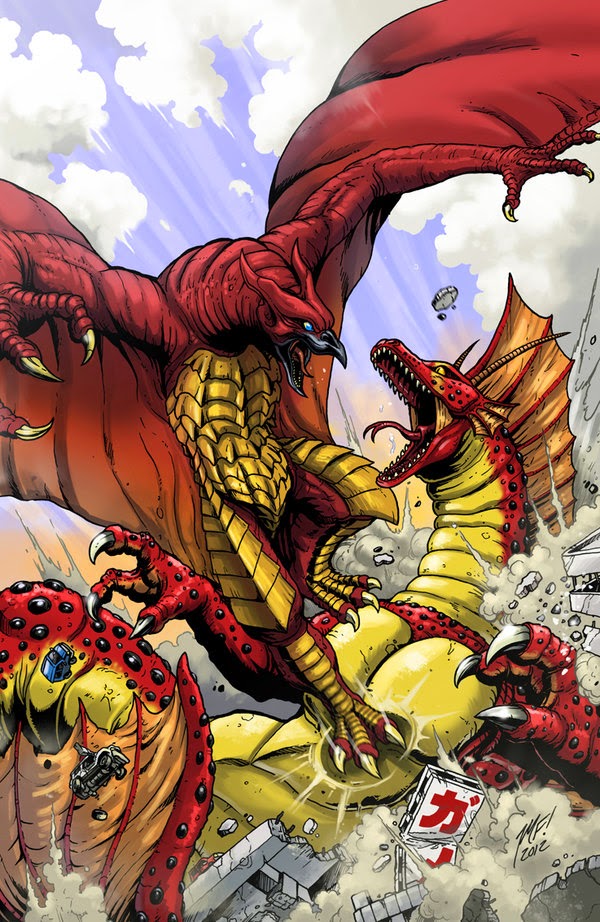 Even more recently, Titanosaurus has been appearing frequently in various Godzilla comics by IDW.  He even got his own issue in the spotlight series, Godzilla Legends.  Following Legends, Titanosaurus has appeared several times to battle Toho mainstays such as Rodan and his old enemy Godzilla. 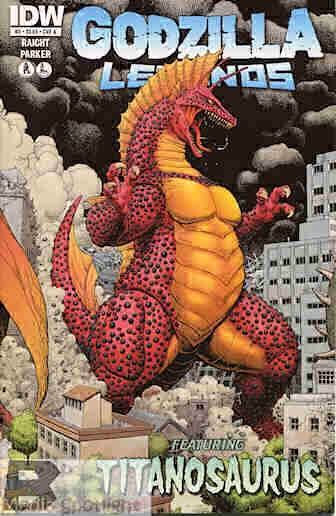 He even came to the Earth's defense against the space monster invasion at the conclusion of the Godzilla ongoing series, teaming up with Battra to battle Spacegodzilla. 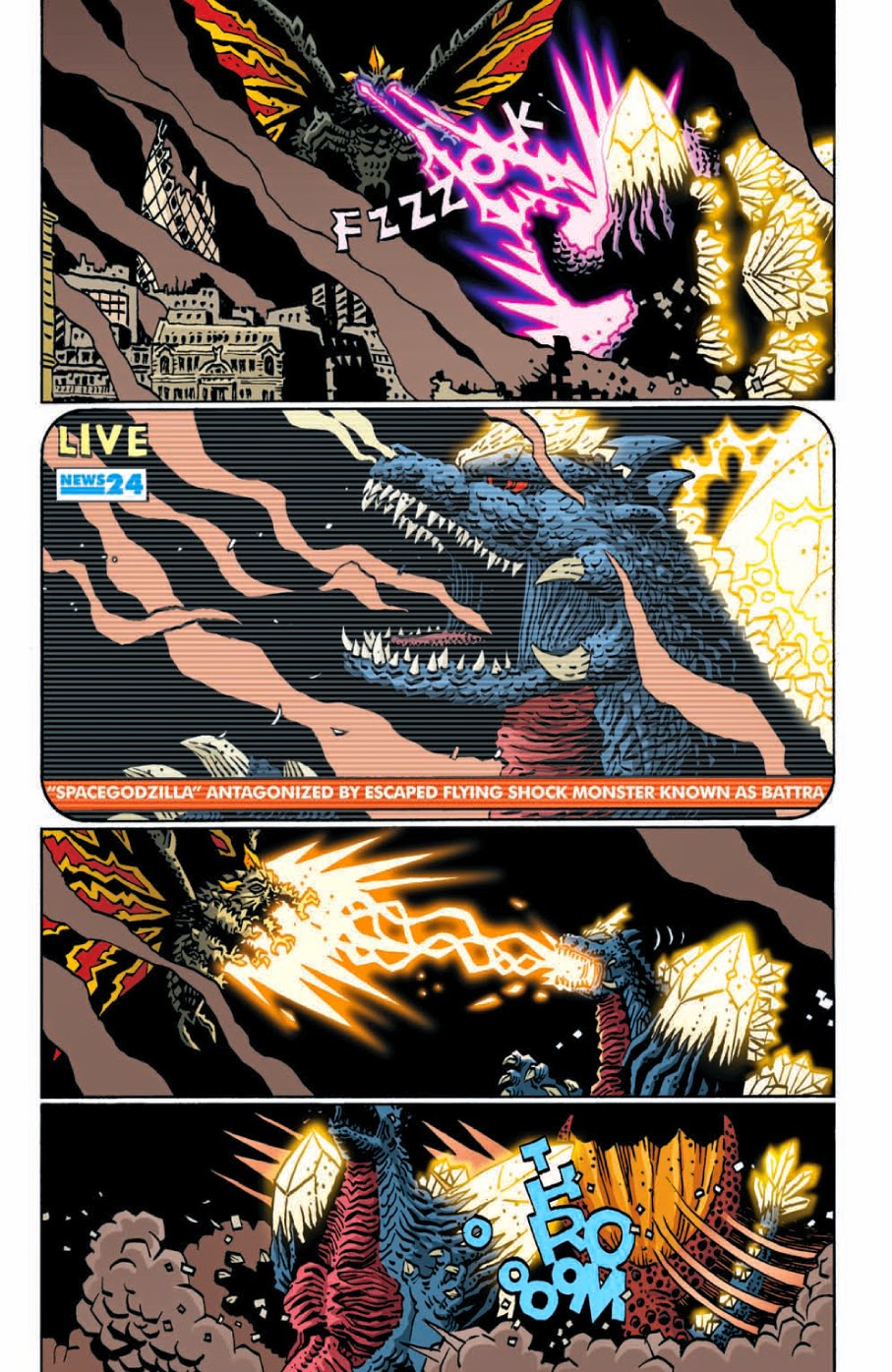 With as much exposure as Titanosaurus has been getting in recent years, it's no wonder he's in such high demand among Western Godzilla fans.

Edit by Steven: To go beyond this, adding a point to his Western love, the powers that be at Diamond Select Toys chose to add Titanosaurus to the first series of Godzilla Minimates. That's right, to test the waters for a new property in the Minimates line, this big WAAAWAAA kaiju was added instead of Mechagodzilla, Rodan, and King Ghidorah - 3/5 of Toho's "Big 5" kaiju which bring in the dough. 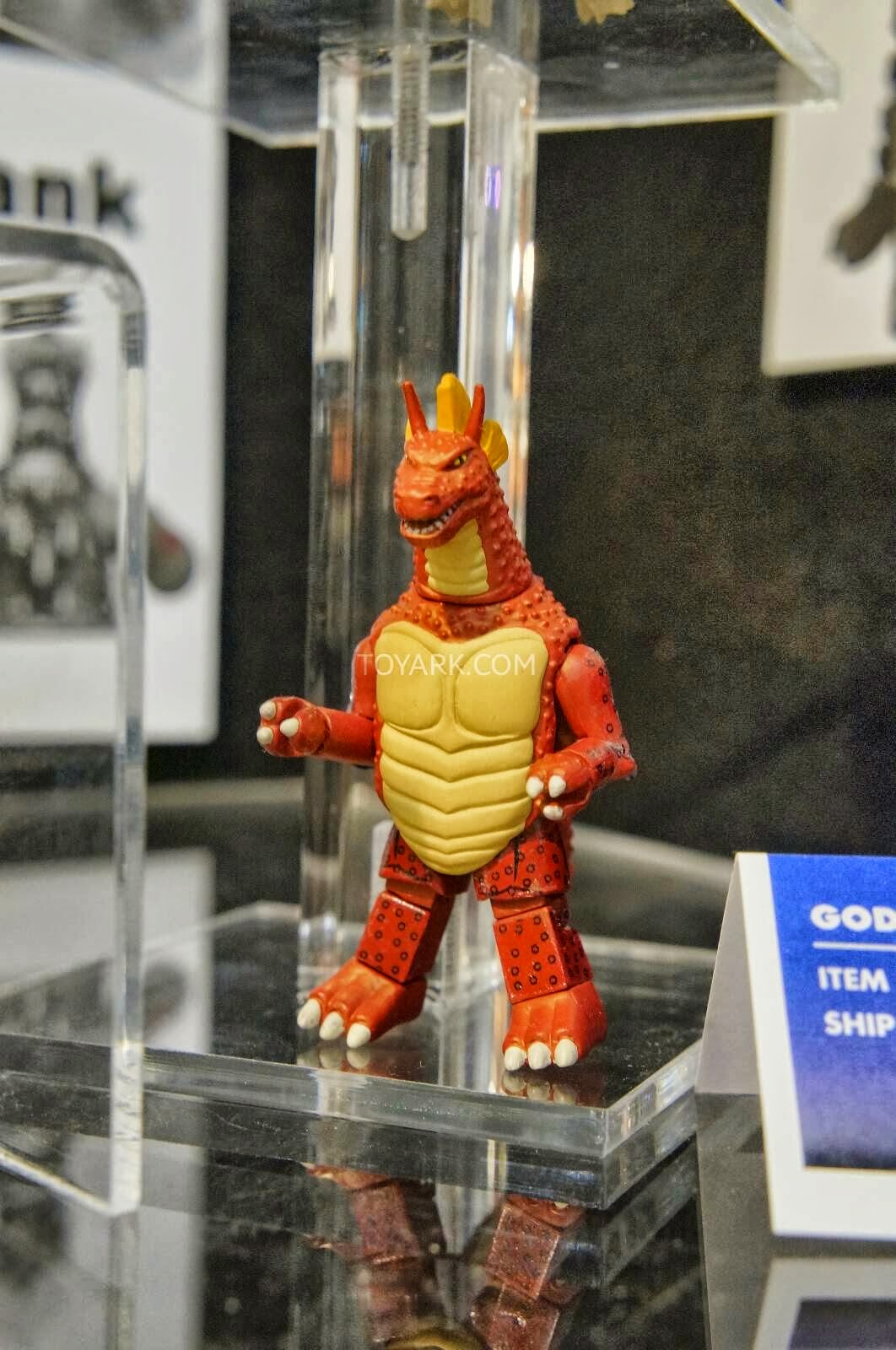 And now back to Justin's points!

3.  Titanosaurus Is Turning 40 in 2015, and His Debut Film Is A Fan Favorite Worth Commemorating! 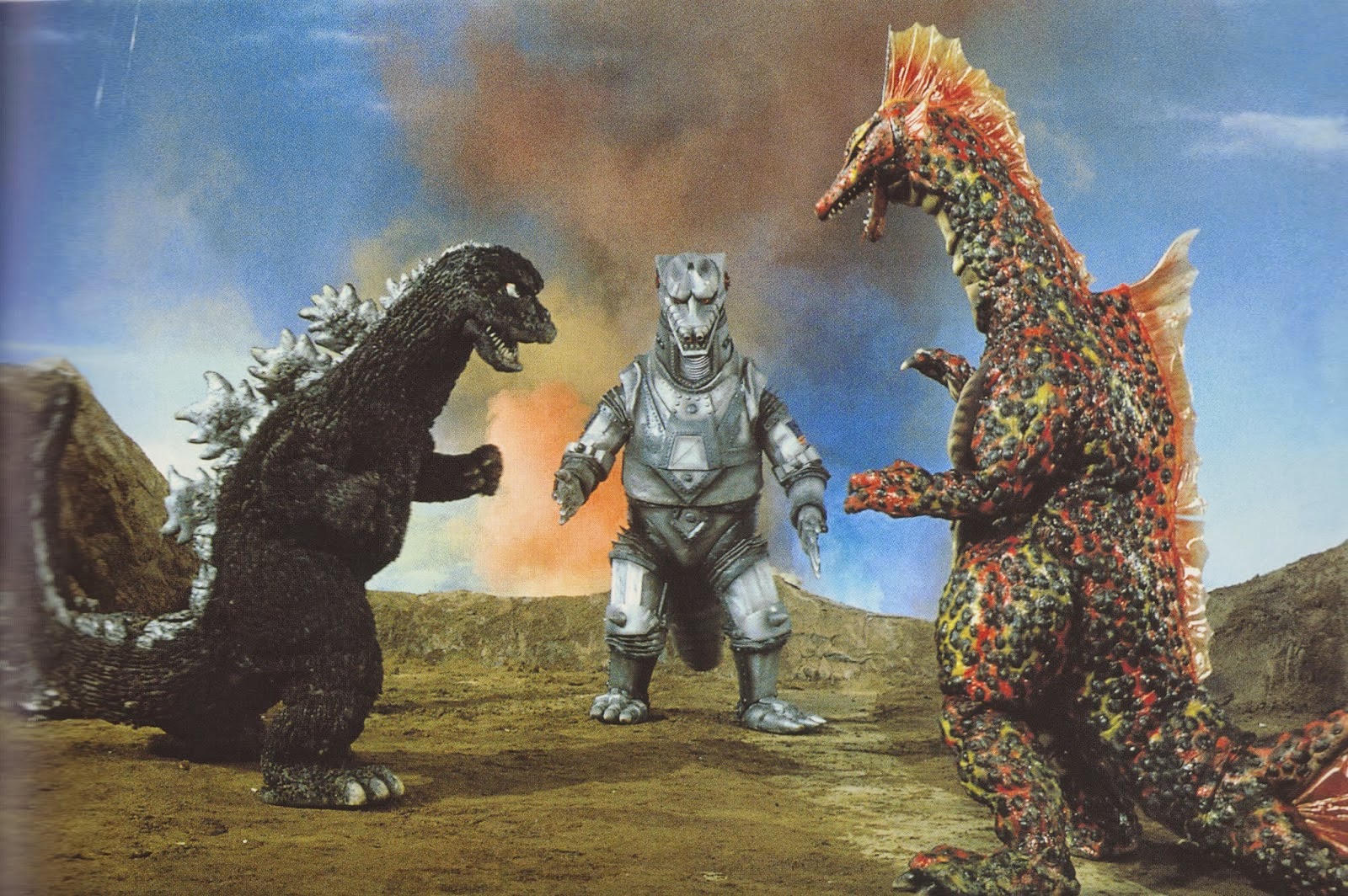 Terror of Mechagodzilla was released on march 15, 2015.  This of course means that next year Titanosaurus (and his debut film) will be celebrating his 40th anniversary.  What better time would there be to release a commemorative figure?  On top of that, Terror of Mechagodzilla is a special film for many Western fans.

Back in the 80s an 90s Terror of Mechagodzilla was one of the more common Godzilla films shown on television in the United States.  Whenever a Godzilla marathon was shown, it was almost a guarantee to wrap up the lineup.  As a result, many U.S. fans are familiar with the film and it's unusual aquatic monster star. 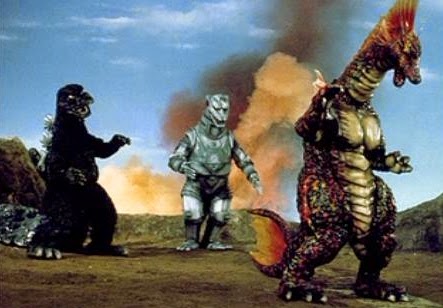 Titanosaurus and Godzilla go toe to toe in one of the era's greatest brawls, with the balance being tipped in the villains' favor by an occasional assist from Mechagodzilla.  Still there were some more unusual moments, such as Titano's trampoline bounce on Godzilla.... and the cringe inducing face biting scene.

Aside from that, the film was a return to the more serious tone of the 50s to mid 60s Showa films.  The film is played relatively straight, and some of the characters (particularly the tragic character, Katsura Mafune) are among the best in the franchise.  It was, for some (myself included), a final glimpse of the golden age of Toho Tokusatsu films.

4. Titanosaurus Would Make A Visually Interesting and Unique Figure That Would Really Pop on Collectors' Shelves

Titanosaurus sports a unique and interesting design, which hearkens back to the "tooth and claw" foes of the earlier Showa series films.  An entirely organic creature of terrestrial origins, he was a bit of a throwback to monsters such as Rodan and Anguirus.  A bipedal, dragon-like beast, Titanosaurus is tall and imposing thanks to his thick build and unusually long neck.  Twin antennae adorn his head, while orange fins jut out toward the back of his jaws.  A giant, crest-like sail starts at the top of Titanosaurus's almost crocodilian head and runs down the entire length of his neck.  A second large sail runs down his back and stops at his tail.   These fins serve to push the aquatic aesthetic, and lend him a somewhat fish like quality.

Titanosaurus's body is hulking and powerfully built overall.  His large chest and leg muscles make him an intimidating foe, and scutes running down the underside of his neck and chest gave him an armored appearance.  And his thick, retractable, fish-like tail is entirely unique among Godzilla's rogues.  Titanosaurus has the ability to open and shut it at will in order to create hurricane force winds. 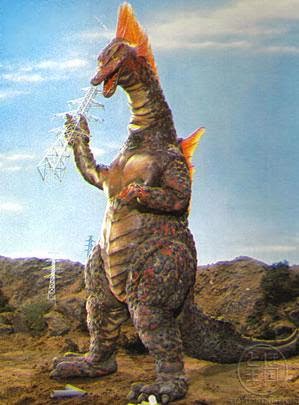 Titanosaurus's color scheme is quite striking in general, and he'd certainly stand out among his S.H. Monsterarts brethren.  A predominantly red creature, the beast is covered in raised black bumps.  A mottling of bright yellow covers the red body in between the black bumps.  The scutes under his neck, his chest, and his underbelly are pale yellow.  And the fins and sails on Titanosaurus's head, neck, back, and tail are all bright orange where they meet the body, but fade into bright yellow at the ends.  The result?  One of the most unique color schemes of any Toho kaiju.  And one that, as an S.H. Monsterarts figure, would positively jump off the shelf!

5.  Most Great Godzilla Figure Toy Lines Have Titanosaurus Figures In Them, And Most Are Highly Sought After! 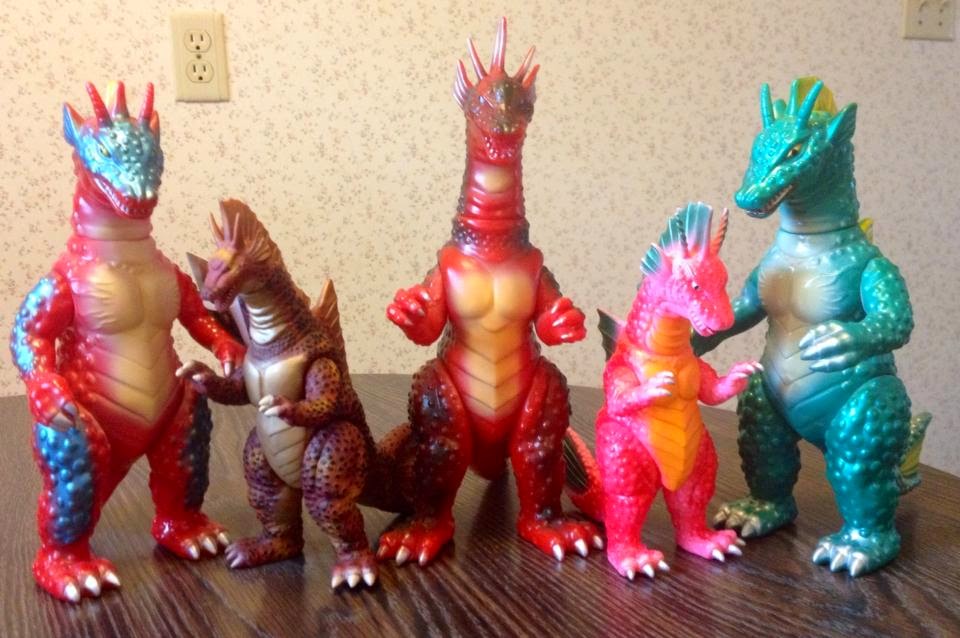 It has become almost a requirement for Godzilla toy lines to produce a fantastic Titanosaurus figure.  Almost every time one is produced it becomes a benchmark in the line.  And the figure often becomes hard to find and highly sought after by collectors.
The 6 inch scale Bandai vinyl Titanosaurus is a stunner, and a stand out even among the great figures in the extensive Movie Monsters toy line. 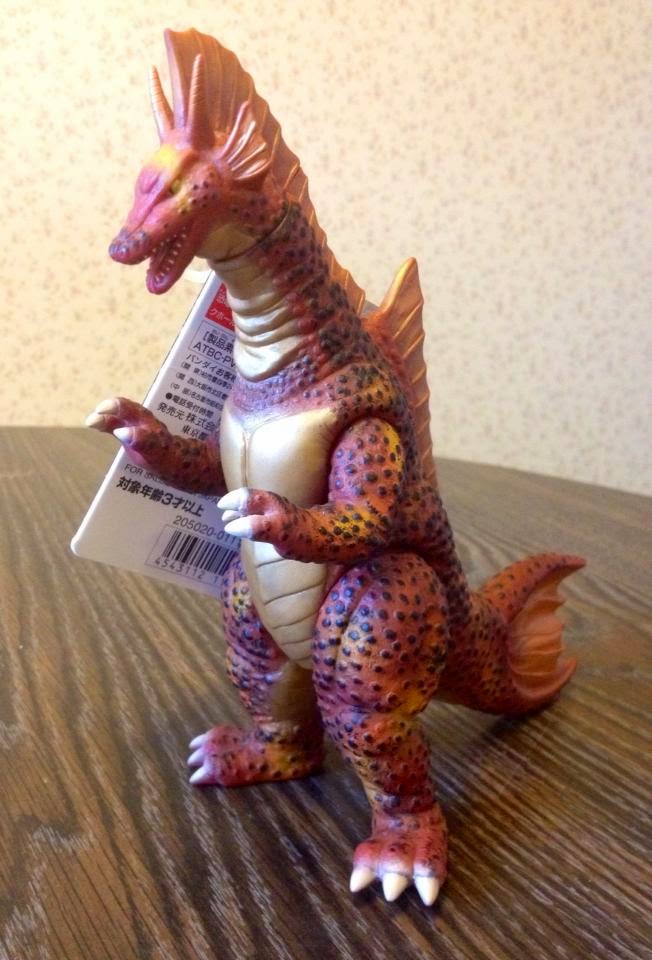 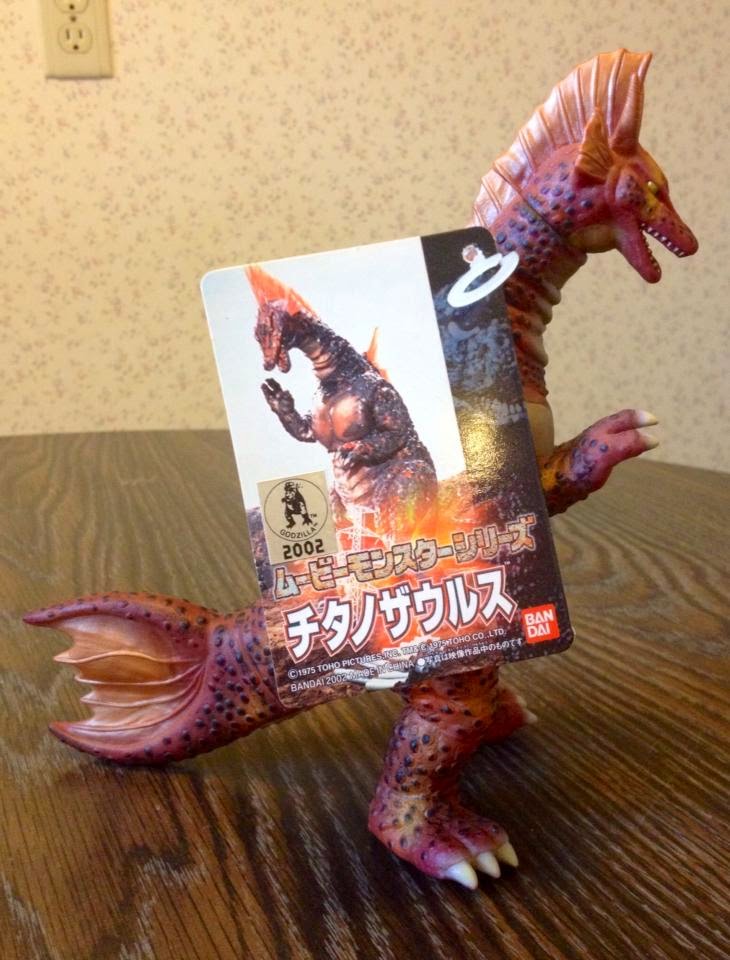 Marmit produced several colorways for its amazing Titanosaurus mold.  Aside from this gorgeous standard red version, there are several others...  Including a green version with an alternate closed tail mold! 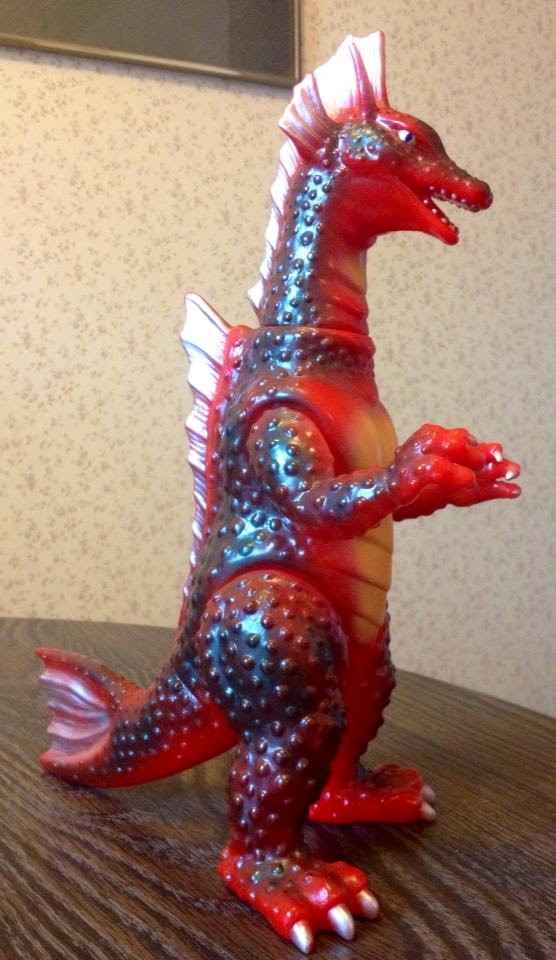 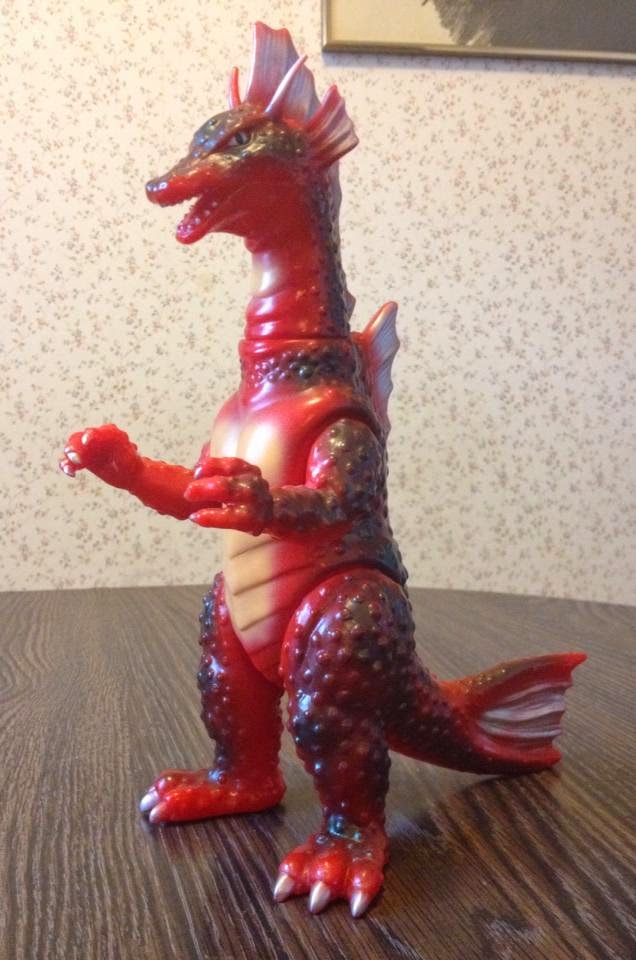 The parababy Titanosaurus is clearly a case of Marmit trying to cram as much detail as possible in a 6" vinyl figure.  The protruding tongue is a very nice touch! 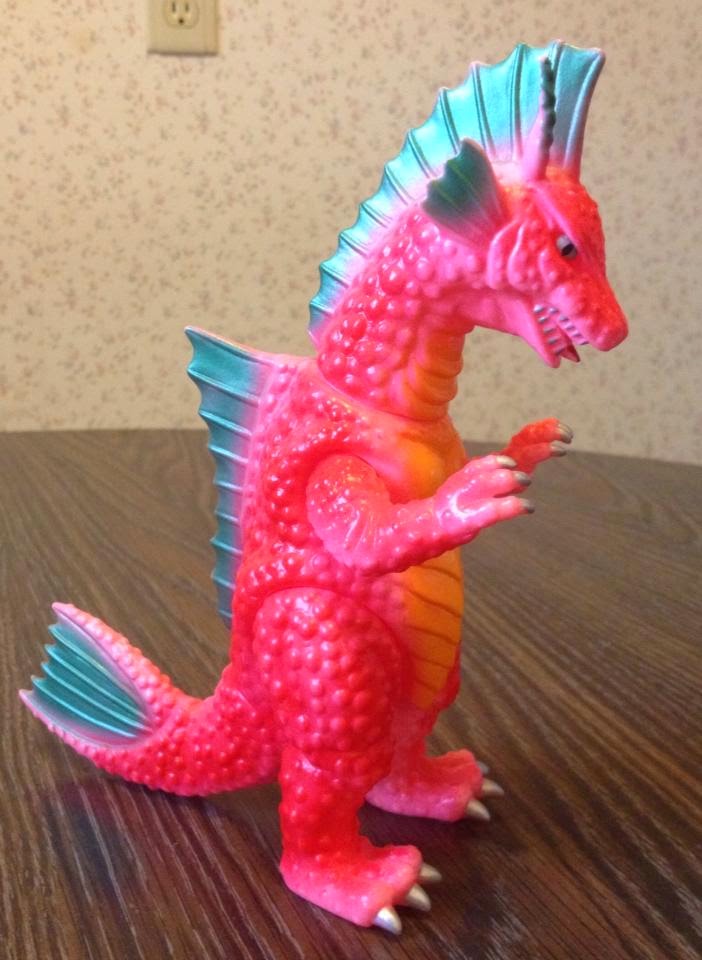 It's amazing how Marmit managed to keep the antennae so thin and sharp despite the material and stylization.  It's truly impressive. 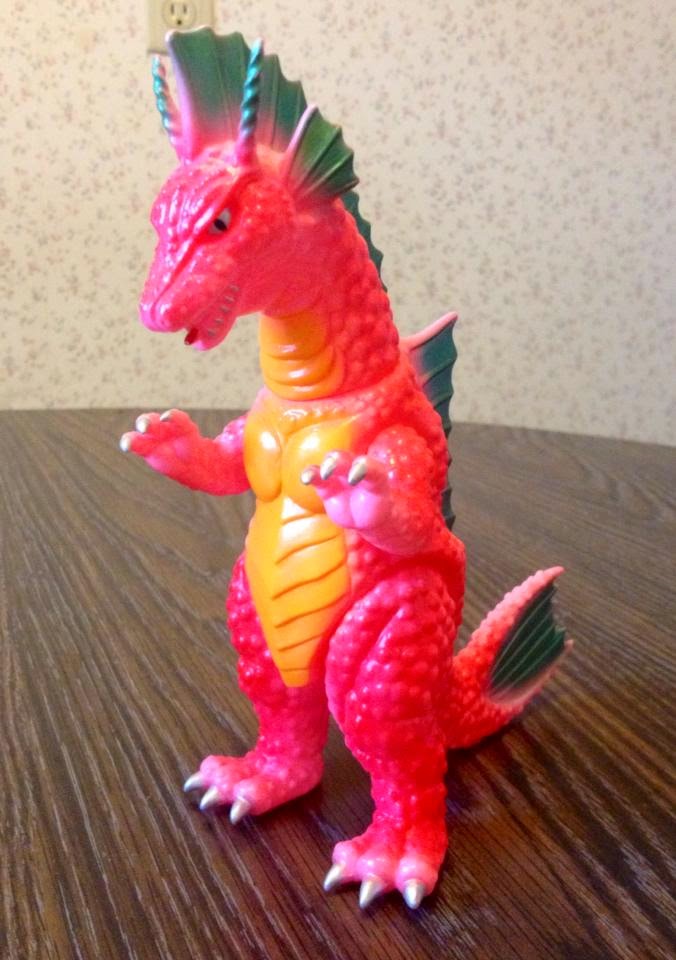 M1's Titanosaurus figure is more reminiscent of a vintage figure. 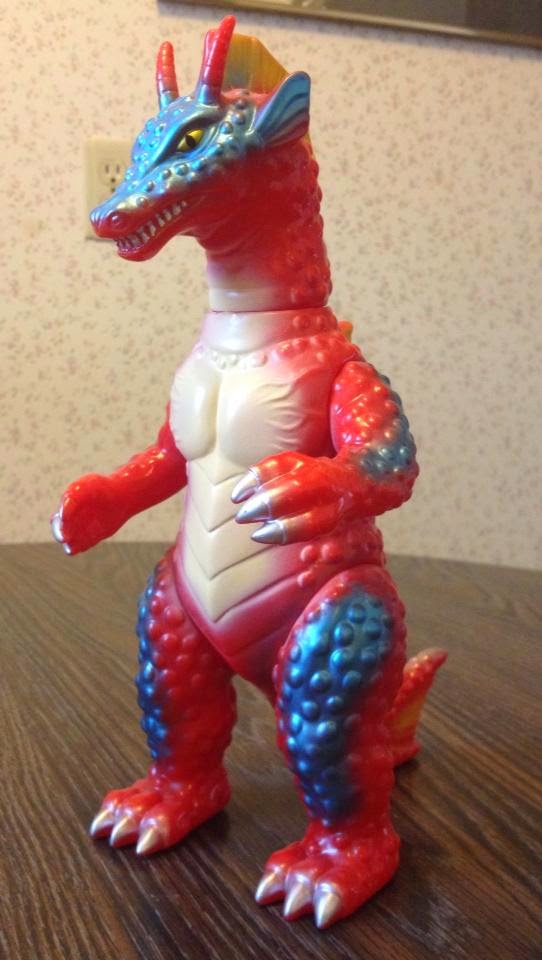 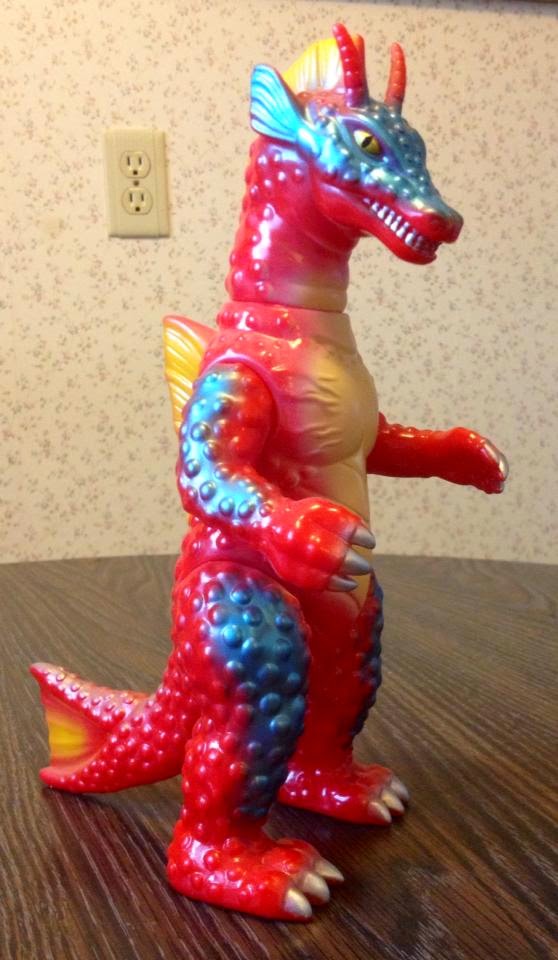 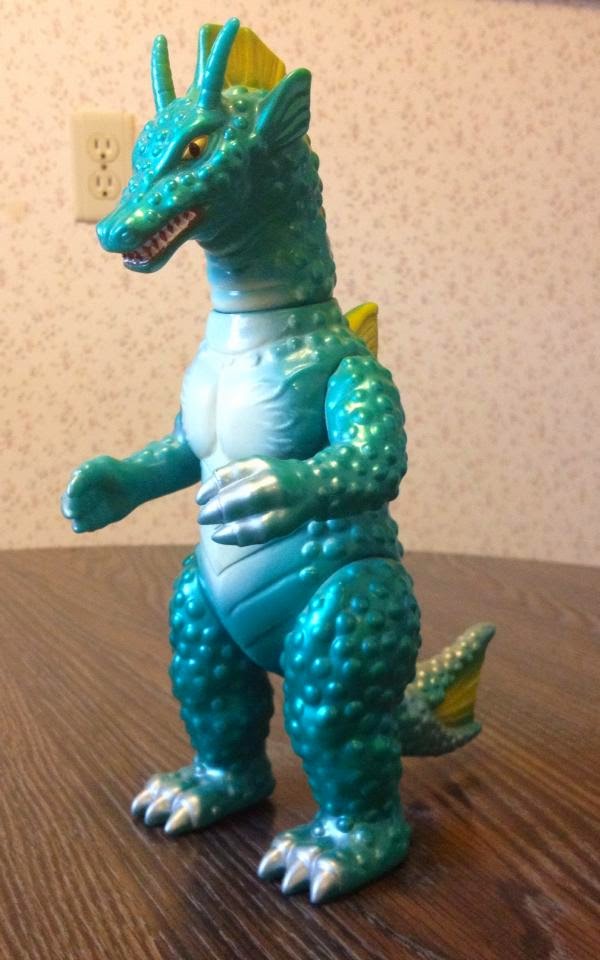 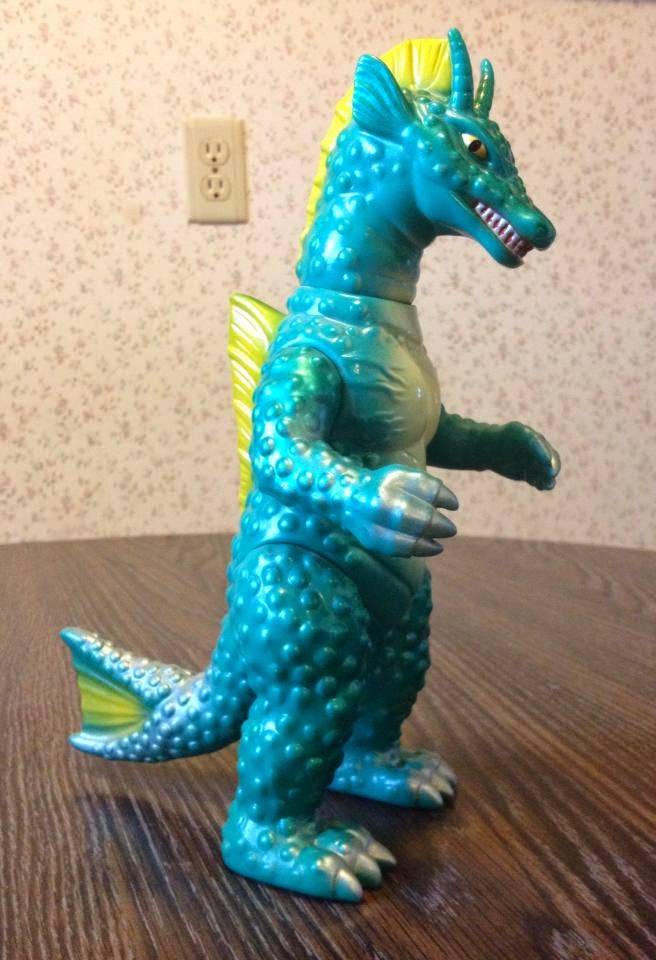 Special thanks to Jim Sullivan for providing photos of his collection!

X-Plus has also produced a 30cm scale Titanosaurus.  The figure is excellent, and highly detailed.  Things such as the serpentine tongue and the thin antennae are rendered perfectly.  This figure is currently out of print and extremely rare. 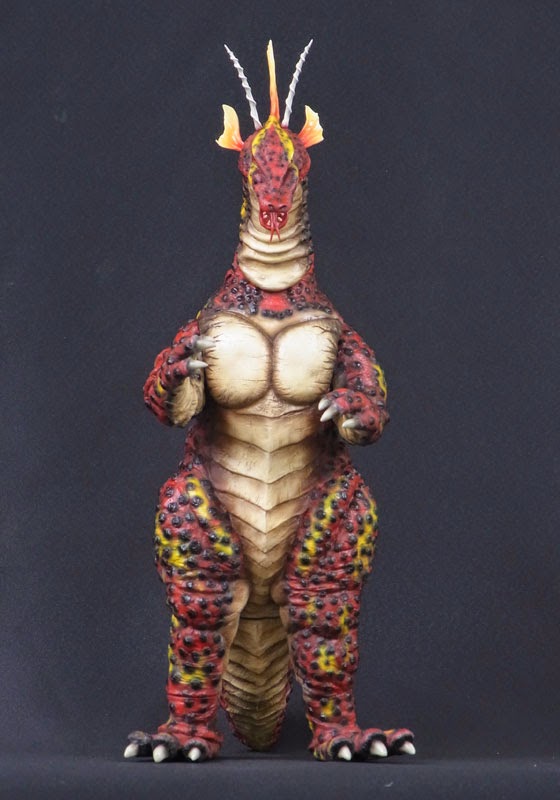 ﻿
Tamashii could no doubt produce an excellent Titanosaurus that could stand tall with the previous companies' efforts.  More importantly, it would introduce a new figure of this monster that would be widely available to fans.

6.  Bluefin, Tamashii Nation's North American Distributor, Wants You to Have A Titanosaurus Figure Too!

That's right, folks.  Aside from all the reasons detailed above, the distributor of Tamashii Nations products thinks it's a good idea for this figure to be made.  If that's not a vote of confidence, I don't know what is.  The fact of the matter is that the vast majority of the releases in the S.H. Monsterarts line are from the Heisei era.  Fans of the Showa era have received a single (In this fan's opinion, rather underwhelming) release.  It's WELL PAST time to delve into this era again, and I believe that Titanosaurus is just the figure to restart with.

And after that, who knows?  Maybe it'll start a wonderful chain reaction.  You see, TN was determined to finish rosters all the way through mid 2013.  Hell, they still seem to be when it comes to Heisei.  Mayber a bit later we'll get a Mechagodzilla 2.   And after that?  Godzilla 1975.  Mechagodzilla 1974 is an easy retool, and then what connects to that? 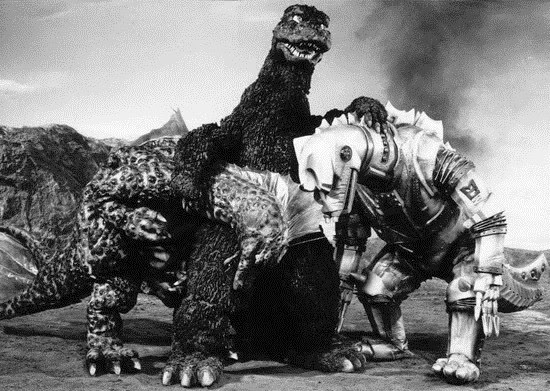 Anguirus and King Caesar.  Godzilla 1975 can be given an alternate 1973 head, and that opens up the possibility for Megalon, Jet Jaguar, and Gigan 1973.  Buuuuuuuuut I'm getting ahead of myself.  First, we need a Titanosaurus. 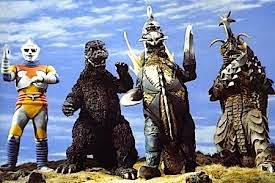 But What Can I Do To Help?

Good question, and the answer is easy.  Got a Facebook account?  Head on over to
https://www.facebook.com/Tamashii.USA
and let them know you want a Titanosaurus in the S.H. Monsterarts line.

I have Titanic Expectations for this line.  I see it being one of the greatest Godzilla toy lines of all time.  But it starts by busting the gates down and getting more Showa figures released.  And seeing as both Bluefin and the majority of fans are pushing for Titanosaurus, he seems like a great figure with which to start.

at 9:17 AM
Email ThisBlogThis!Share to TwitterShare to FacebookShare to Pinterest
Labels: Bandai, Imported Thoughts, S.H. Monsterarts