Review: D-Arts Zero (1st. Version) By Drew
Intro: With the release of D-Arts Zero (type 2), lets take a look at Bandais attempt at Zero (1st. version)
Sculpt: (4/5)  Everything is pretty accurate to the source material.  The hair is somewhat of a soft sculpt, but very passable and acceptable.  Give Bandai extra scores for sculpting the blue triangle on Zeros' head and the green dots on his chest plate.  Nice little touches.  One thing I noticed was that the red portion of the helmet on the head is die cast, which is a blessing and a curse.  More on that later.........
Paint: (4.5/5)  Solid paint.  All the tampo stamps and decals are nice and clean.  As well as the red, white and black, no paint bleeding.  A nice bonus, all the white parts of Zero are painted in a metallic pearl white.
Articulation: (3.5/5)  Zero has the standard points of articulation.  Ball jointed head, shoulders, and hips.  His waist moves 360 degrees and the chest moves ever so slightly for more dynamic poses.  Elbows and knees are double jointed and have a nice range of motion.  Now to the bad.  Zeros' hair is articulated on a small ball joint, careful cause the joint is very small and could break easily.  I don't know if its just me, but there isn't any wrist articulation, making it very limited how the wrist can be displayed.  His foot/shin joints are relatively useless due to the design of the character.  And that die cast helmet?  If not the neck joint isn't "locked in," due to the weight of the helmet, Zero will have the tendency to look up.
Overall: (3.5/5): While I gave the review generally positive reviews, this Zero just isn't the iconic Zero I had hoped for.  As a figure, while having flaws is a decent figure.  For any fans of Rock Man X, pick this guy up.  If you are waiting for the iconic Zero, get the type 2 release. 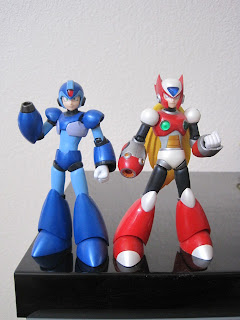