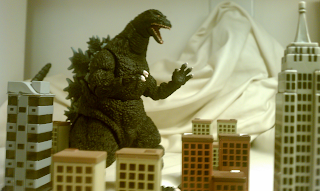 Introduction:  In all of pop culture, few monsters have endured quite as well as Godzilla.  Through 58 years, 29 films, two cartoons, and countless pop culture references, the King of the Monsters has remained in the public eye against all odds.  Even so, the S.H. Monsterarts line by Bandai/Tamashii caught even the most diehard Goji fan by surprise.  Including yours truly.  Super Articulated Godzilla figures had been a dream line of mine for years.  Kaiyodo's Sci Fi Revoltech had fans hoping we'd finally get highly poseable figures of the Big G with their releases of various Toho kaiju.  Alas, the announcement was made that Godzilla and Ghidorah were not going to be made.  Fans' hopes were dashed.  Little did they know, but Bandai had something BIG in store... 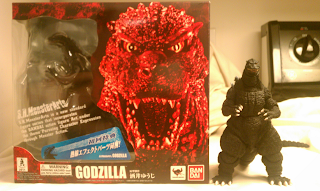 Package (5/5):  The package for S.H. Monsterarts Godzilla is nothing short of stunning.  It is predominently blood red with a huge picture of Godzilla's snarling face on the front. A transparent cutaway section reveals the figure inside.  The back side is covered in Japanese text and promotional images of the figure.  It really is perfect and spectacular.  Depending on whether or not you got the first release, a sticker showing the promotional Atomic Ray is included on the front of the box along with a blurb declaring:  "S.H. Monsterarts is a new standard figure series that incorporates the BANDAI action figure "Art" under the theme "Pursuing Character Expression through Monster Action."  Exciting stuff, folks. 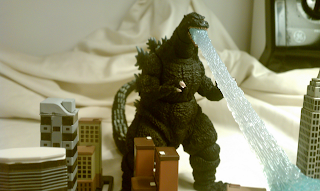 Sculpt (4.5/5):  This figure is meant to represent the 1994 incarnation of the Heisei Godzilla (Moge Goji to the initiated) from the film Godzilla vs. Spacegodzilla.  It s a dead on likeness, and there's no denying which version they were going for.  There are a ton of sculpting details on this figure, many of which make it very much its own character.  The scales and folds are flawless, as if the beast himself stepped right out of the film.  The head contains a lot of interesting details as well.  The face is sculpted in a vicious snarl, with one side lifted slightly.  The mouth is filled with rows of individually sculpted teeth.  There are several rows of intricately rendered dorsal plates all the way down his spine  Only one detail slightly mars what would be a Perfect score:  His right hand is sculpted in such a manner that it appears to be anther left hand.  Upon closer inspection it is a proper right hand, but it appears awkward at a casual glance. 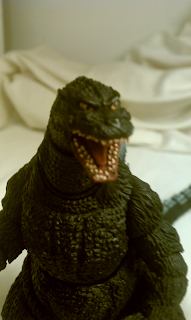 Paint (5/5):  The paint on my figure is perfect.  Everything from the eyes to the frosty looking spines is faithful to the monster's color scheme.  The eyes are on center and convey an animalistic rage.  There is no slop apparent. 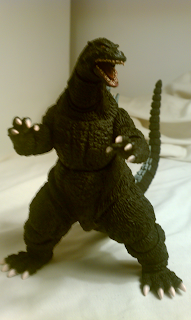 Articulation (4/5):  S.H. Monsterarts Godzilla boasts 29 points of articulation, most of it ball jointed.  His tail alone has ten joints!  Unfortunately, much of his articulation is rather restrictive.  The ball jointed hips move fine sideways, but are extremely limited with back and forward motions (such as taking a step).  The ball jointed torso joint doesn't move very much either, and the dorsal plates make it hard to turn the joint from side to side.  On the upside, S.H. Monsterarts Godzilla's arms have a much larger ranger of motion than the actual movie monster's arms did!  The head/neck/jaw articulation allows head tilts and other motions that add a lot of character to the figure.  Overall the articulation is the best we've ever gotten on a Godzilla figure.  Despite some restrictions, it really is awesome to have such a poseable Godzilla!! 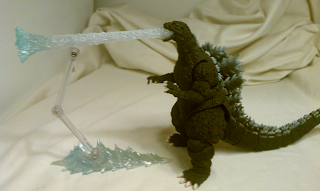 Accessories (3/5-0/5):  Depending on which version you purchase this figure's accessories range from okay to abyssmal.  The first production bonus was Godzilla's Atomic ray along with a custom stand depicting what I can only assume is a radiation shockwave.  There is a Tamashii arm that holds the beam up to Godzilla's mouth.  I like the beam (though it does resemble a water blast rather than an Atomic ray), but the stand is a bit distracting.  It's too bad Tamashii didn't figure out a better way to allow Godzilla to be displayed with his beam.  Now, if you didn't get the first production version the figure comes with NOTHING.  This is very disappointing, especially considering Tamashii's tendancy to include amazing accessories. 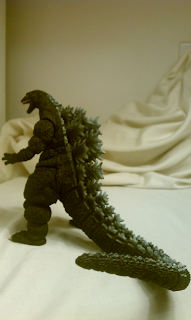 WATCH OUT!  The only thing I would advise is to look at the paint on the figure before you buy it.  I've heard horror stories about paint slop and off-center eyes.

Overall (4.5/5):  Despite some negative points, this is indeed the type of Godzilla figure I've always dreamed of owning.  It is incredibly detailed and highly articulated.  I recommend it wholeheartedly to any Godzilla figure collector.

at 1:09 AM
Email ThisBlogThis!Share to TwitterShare to FacebookShare to Pinterest
Labels: Bandai, Reviews, S.H. Monsterarts