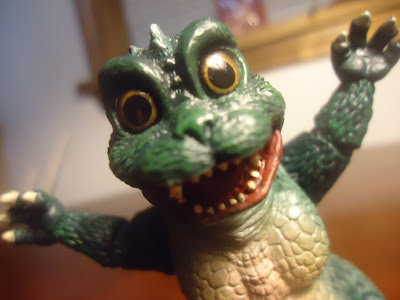 Introduction: The summer of 2012 brought quite a bit for the S.H. MonsterArts line; Godzilla (Comic Con Explosion), Fire Rodan, and one little dude that is the son of Godzilla. Little Godzilla was in the movie Godzilla vs. SpaceGodzilla, and even though the movie wasn't received too well by fans, there is no doubt this cute (?), adorable (?), lovable monster captured the hearts of fans... But how does the figure stack up? Read on to find out!

Package (4/5):  The package this little mutant comes in is typical of a web exclusive and S.H. MonsterArts figure. The box shows a nice shot of the suit with a green background, and it comes in the normal web exclusive brown box with the figure's name on it. Nothing out of the ordinary, but it looks nice as a display piece alongside the other boxes a collector may have. 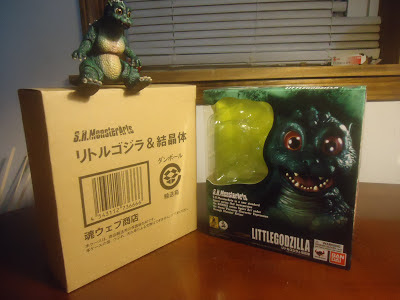 Sculpt (4/5): While sculptor Shinichi Wakasa did a phenomenal job sculpting the figure, the figure feels a bit bland compared to the bumps and ridges on other releases. Details are present, but they do not feel complete in some instances. For example, the stomach and chest look as if they are something you can find on any animal, not just Little Godzilla. Also, upon close examination, one will be able to easily see mold lines all around the figure, including the stomach, head, arms, and more.

However, what is there looks great. Bumps and ridges look right on Little Godzilla, and the dorsal plates just feel fluent on the figure. The ears, surprisingly, look absolutely stunning, and the hands look great. The face is sculpted in a manner that looks slightly differently from the suit, but still gets the character in a realistic way. Unfortunately, the articulation on Little Godzilla breaks up the sculpting in some places, and it feels a bit incomplete, with one example being the gaps in the thighs. While the sculpt is great, it is not perfect. 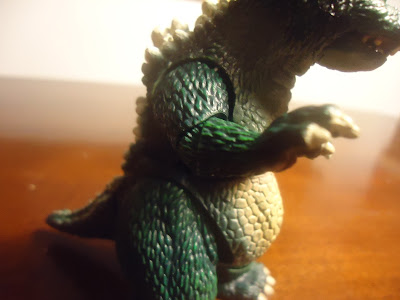 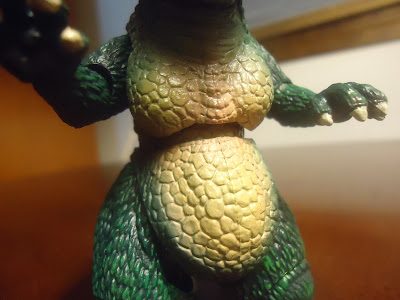 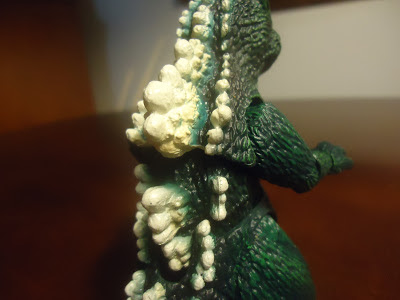 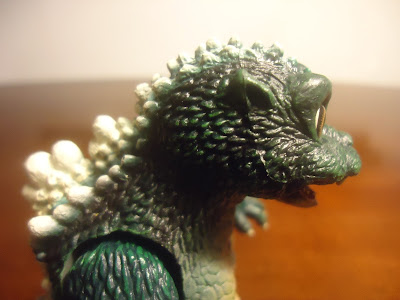 Paint (4/5): The paint on the figure looks great for the most part. Dark and light shades of green mesh together to really bring out the bumps of the scales on the high points and show the grooves really well. The bone color of the dorsal plates looks good, and the stomach/chest area is nicely done.

However, in some spots, the light green is seems to be a bit much for this reviewer, and the dorsal plates' paint apps seem to be clumpy in spots. Another small issue is that the claws look like they were dipped into the required paint and not properly applied, especially on this figure. 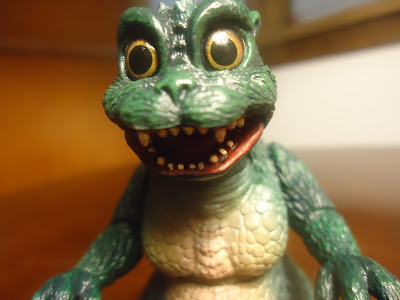 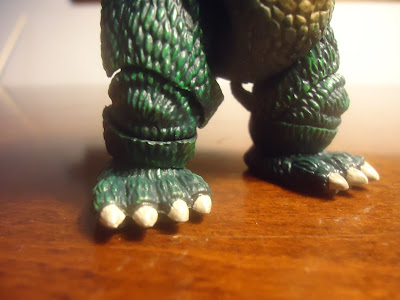 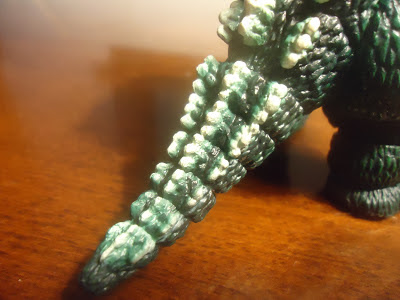 Articulation (4/5): The articulation on Little Godzilla is very basic, and what is shown is what is sold. He has an ab crunch that lets him rotate about 90 degrees left and right, and he can rear up and bow down. He can move his arms in three places, including the hands. His tail is on one ball joint, and his legs feature four points of articulation; one at the thigh, two at the knee, and one at the foot. Also, without needing mention, his mouth can open and close.

Unfortunately, he lacks a bicep swivel, so the arm articulation is limited to raising the arms up and down. Also, his head has no articulation aside from the mouth, so he has to move his whole torso to change his viewpoint.

Overall, the articulation for this figure works, and seems to fit the character for the most part. One awesome pose one can put him in is a sitting pose and it is a lot more fun to display him this way than it seems. 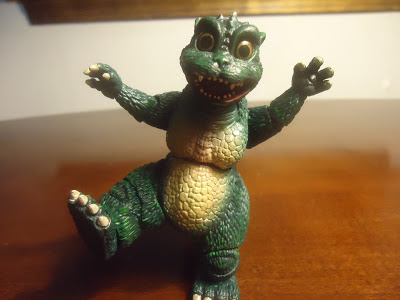 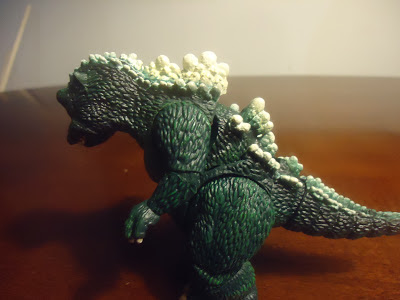 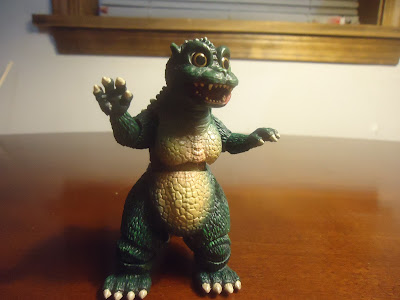 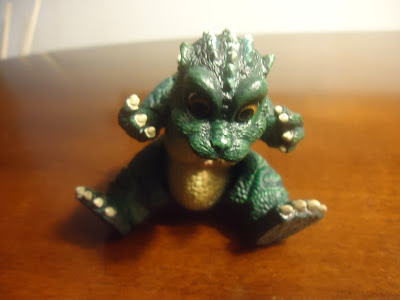 Accessories (4.9/5): This little guy comes with some simple extras; two small and two large crystals, and two orange Stage ACT bases to put the crystals on.  The bases do not need any description, since most of the readers know what they look like. The crystals are what really sell the extras.They are sculpted in a way that makes them look very jagged and beautiful, and since they are translucent, under the right light, they look fantastic.

The extras were promoted to form little cage, and since the crystals are articulated at their base, there is a lot of fun to be had with them for displays. Another plus to these crystals is that SpaceGodzilla looks great when coupled with them.

The only reason why the accessories do not receive the perfect score is for two reasons. First, the base can be cumbersome when moving the crystals around and can cause them to pop out, though it is not a big issue. Stationary crystals would have been acceptable, too. The second reason is the number of crystals; WE WANT MORE OF THEM! 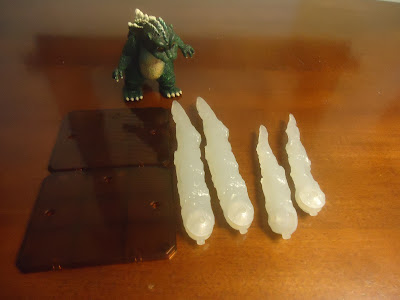 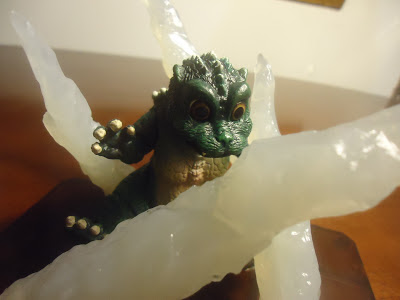 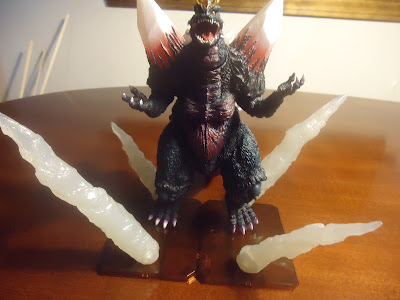 WATCH OUT!!!
Realistically, there is nothing to watch out for! Just be careful when first moving the little tike due to the fact that his joints are at first really, really stiff. For example, this Little Godzilla kept his mouth closed for about one week before it opened!

Overall (4/5): In the end, Little Godzilla is a nice figure in the S.H. MonsterArts line. Some will love the little guy, some will not. This reviewer has had a lot of fun posing Little Godzilla, and he looks great standing (or sitting) next to his bigger family members.

One thing to keep in mind is that he is $42.99  at MSRP. Though that is a bit much for such a little figure and crystals, keep in mind that this was a web exclusive in Japan, and Bluefin was able to bring it over. Considering the trade off, the price tag is not that bad, and he is widely available at the time of this review on Amazon, ToyFreakz, and Monster Planet Toys.

If one is on the fence about buying him and has the cash, this reviewer says to go for it.

Now, if you'll excuse him, this little guy has some quality time to spend with his dad. 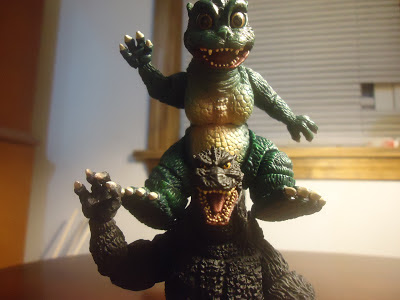