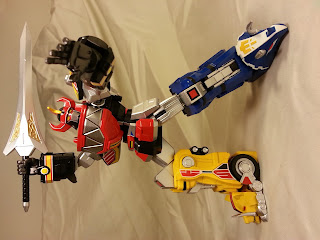 Introduction:  When Mighty Morphin Power Rangers debuted almost 20 years ago it was an instant success.  Something about it resonated with the kids of that time, including yours truly.  Maybe it was the idea of ordinary kids gaining super powers.  Maybe it was the over the top combat.  Or maybe, just maybe it was the awesome robot Dino Zords... and their combined form the Megazord.

Well, it's nearly twenty years later and all the kids who watched the Power Rangers have grown up and gotten jobs of their own.  What a perfect time for Tamashii to release a highly articulated figure of the Megazord!  So how does the figure stack up?  Read on and find out! 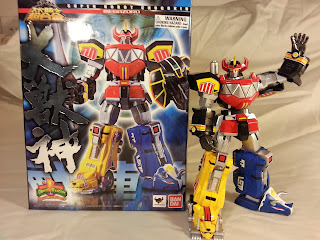 Package (4.5/5): The packaging is very attractive, with silver foil Japanese lettering and vibrant background colors.  The Bluefin distributed boxes have the Mighty Morphin Power Rangers logo in the form of a sticker.  Instead of saying "Daizyujin", there is another sticker that says "Megazord".  This caters solely to North American fans, and the effort is appreciated!  The front has a photo of the robot superimposed of the five dinosaur symbol.  The back of the package features several promotional shots of the figure amid an exciting lightning background.  Overall, the package is eye catching and attractive.

I do, however, have one minor nit pick.  For one who's accustomed to having see through window on their Tamashii figures, this windowless package seems a bit incomplete. 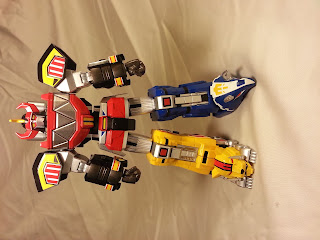 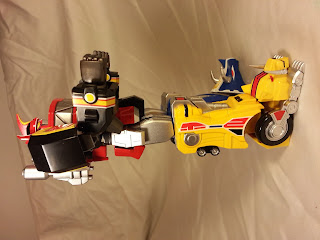 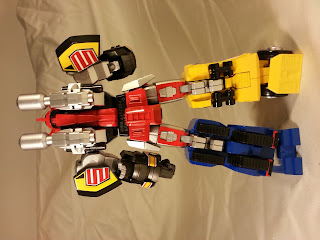 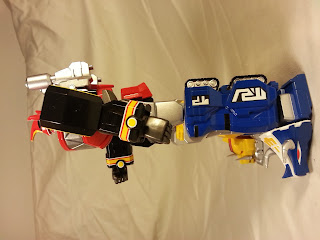 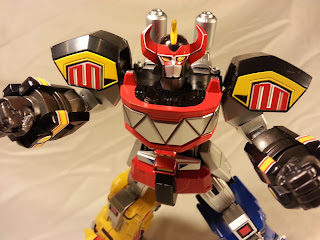 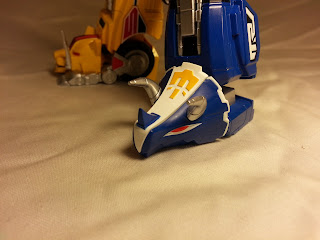 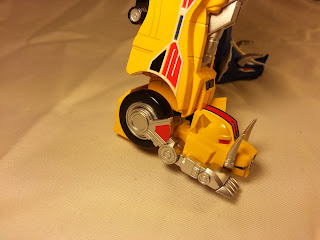 Sculpt (5/5):  The sculpting on this figure is nothing short of excellent, with one potential flaw.  We'll get into that in a minute....  but first, let's focus on the positive.

If Tamashii knows one thing, it's how to make robots.  Put plainly, this figure is gorgeous.  This guy is covered in sleek, beautiful details.  Tank treads, wheels, and the Megazord's trademark horned head are all faithfully reproduced.  Angular groves are etched into the metallic portions as well.  Which, by the way, make up a decent amount of the figure.  The chest armor, in particular looks amazing.

The Zords are all apparent, with the Triceratops and Saber Tooth Tiger Zords making up the legs.  They resemble their onscreen counterparts very closely, with the symbols sculpted on.  Also recognizable are components of the Tyranno Zord (on the back), the Pterodactyl Zord (for the chest plate), and the Mastadon Zord (arms and shield, obviously).  Seeing how well these are integrated makes me want the Zords themselves included in one of Tamashii's robot lines.

A flaw was mentioned earlier, though it's minor.  If you're looking for 100% accuracy, this isn't your figure.  As well sculpted as it is, the SRC Megazord's proportions are definitely stylized.  The actual on screen suit is much blockier, with a bulkier body and shorter limbs.  That being said, I actually prefer this slightly exaggerated look. 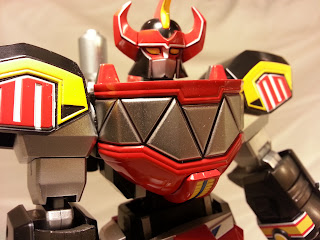 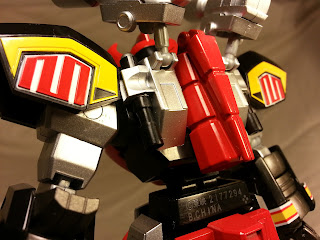 Paint (5/5):  The paint apps on this figures are perfect. There is virtually no slops and nothing is off center.  All symbols are neatly applied, and everything looks perfectly natural.  The bright primary colors will help this figures pop on almost any shelf! 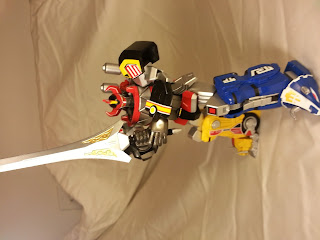 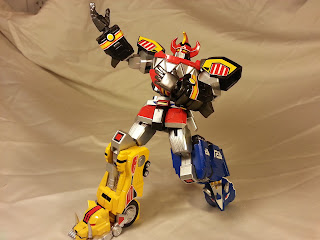 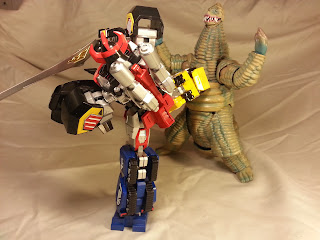 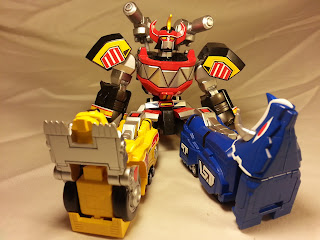 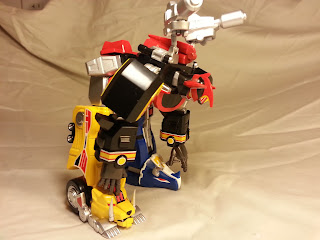 Articulation (4.75/5):  There are a ton of articulation points on this figure. And they all work great, thanks to some innovative surprises.  Starting at the top, the head and neck are both ball joints.  Despite the limited movement of the latter, they work very nicely together.  You can get pretty much any position except  looking straight up in the air.  There are two shoulder cannons on the figure's back that can aim any direction thanks to two ball joints; one at the base of the cannon, one where the cannon meets the body.

The shoulders are complex, with an internal hinge allowing the shoulders to swing forward entirely.  Connected to the hinge is a swivel hinge allowing up and down motion for the arms.  On top of all that, there's hinged shoulder armor.  Definitely one of the more complex shoulder joints around.  Under the shoulders are bicep swivels.  The elbows are the typical double hinges, but there was a surprise in the forearms:  Extra hinges just above the wrists!  This allows for excellent poseability, to the point where the Megazord can hold his sword in both hands!

The torso joint is something unique in my experience.  It rocks back and forth where it meets the pelvis, and separates in the middle.  Hidden in the separation is a joint that allows a great deal of forward/backward and side to side rocking motion.  Thanks to this hidden joint, the SRC Megazord can lean far forward.  He also gets a decent range of side to side and backward motion.

At the pelvis, there are four hinged flaps that allow the legs an excellent range of motion.  The hips are true ball joints, and they can kick forward about 90 degrees.  Not at all bad for such a bulky figure!  No splits will be done, but there is a decent range of outward motion as well.  The upper thighs contain swivels which allow the leg to take many different stances.  The knees are double hinged and can bend so far as to allow the Megazord to kneel.  The ankles are ball joints and the Dino Zord's heads act as the toe hinges, bending where their necks would be.  There is even a surprise hinge joint where the Saber Tooth Tiger Zord's legs act as a sort of kick stand to prop it up in certain positions.

All in all, the Super Robot Chogokin Megazord has surprisingly excellent articulation for such a bulky, blocky design. 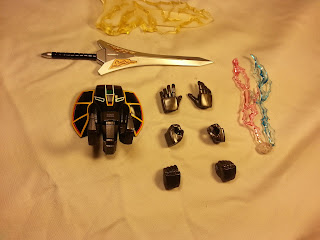 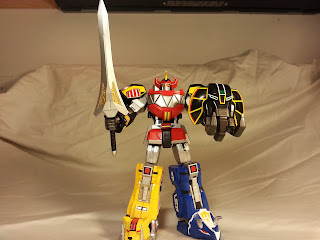 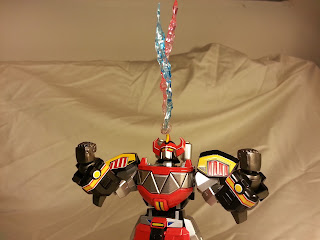 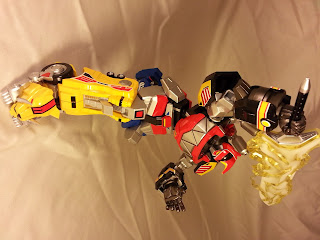 Accessories (5/5):  The SRC Megazord coms with just the perfect amount of accessories.  Aside from his default fists he comes with two more sets of hands.  One set is open, for grasping and dramatic gestures.  The other set is the obligatory weapons holding hands.

Next (and perhaps most importantly) the SRC Megazord comes with his Power Sword.  It is long, stylized, and sharp!  There are intricate designs etched in it, and it looks great.  There is an energy effect that fits over the entire sword.  It's covered in lightning that's sculpted in translucent yellow plastic.

Also included is the Mastadon shield, which is made from the head of the Mastadon zord.  Like the rest of the figure, it's very well sculpted.  It matches nicely with the figure's arms, and fits perfectly in the appropriate hand.  Finally, the SRC Megazord comes with a laser effect.  It's sculpted in blue and pink translucent plastic, and fits right on the robot's forehead horn.

All in all, there is an excellent amount of accessories, which add a lot of value to this figure. 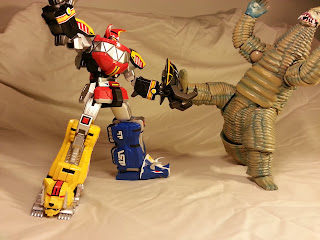 WATCH OUT!  When moving the heads around make sure you don't scrape his chin on chest.  The paint will come right off!  And, as always, handle him with kid gloves.  Tamashii figures aren't meant to be smashed together, dropped, etc.  Also of note is just how sharp his Power Sword is.  Keep aways from small children. 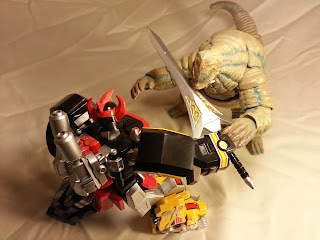 Overall (4.75/5):  All in all, Super Robot Chogokin Megazord is a fantastic figures.  It has a surprising range of motion, some wonderful (if stylized) sculpting, metal parts, and a bunch of really fun accessories.  I recommend this figures to Mighty Morphin Power Rangers (and Super Sentai) fans, as well as Tokuatsu and robot fans in general. 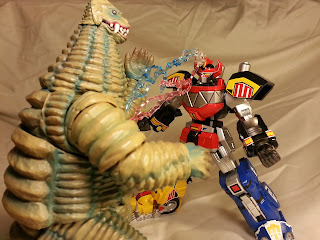