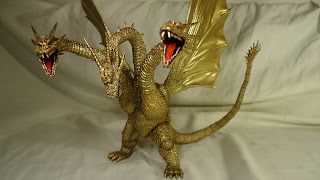 Introduction:  When S.H. Monsterarts King Ghidorah was first shown in prototype form it caused quite a stir.  Why wouldn't it?  King Ghidorah is easily Godzilla's most recognizable and iconic foe.  The fact that Bandai/Tamashii was making an in-scale, highly articulated version of the three headed super dragon was enough to set the fans' imaginations on fire!  Of course, everybody knew it was going to be pricey  S.H. Monsterarts figures are definitely not what one could call "cheap".  And Ghidorah is enormous... far larger and more complicated than the average Toho beast.

And man, was he pricey.  The shipping itself was jaw-dropping.  So now that he's showing up, the question on everyone's minds is:  Was he worth it?  Is he the true centerpiece to anyone's S.H. Monsterarts collection?  Or is S.H. Monsterarts King Ghidorah a QC nightmare?  Read on and find out... 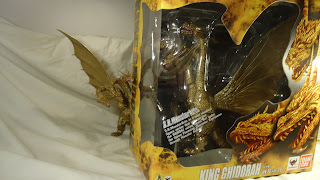 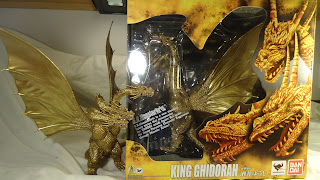 Package (5/5):  This is one HUGE box.  If you're aware of this figure, you've most likely seen the picture of the woman holding the box online.  Well, the pic isn't exaggerating in the slightest.  This thing is MASSIVE!  In typical Monsterarts fashion, the front has an image of King Ghidorah and a big display window through which to see the figure.  Oddly, instead of a photograph of the featured monster, there's a drawing depicting all three of his draconic heads.  The entire front of the box is gold in color, and will stand out brilliantly among the other Monsterarts packages.  The back is covered with the early promotional shots of the figure.  Pretty standard fare (aside from the sheer size), but the box itself is definitely eye catching.  The only real problem is storing it. 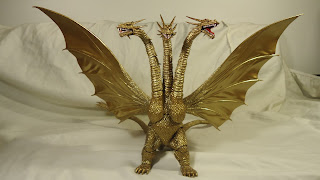 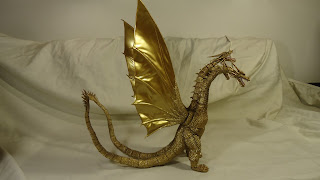 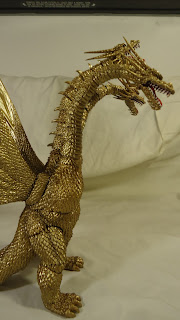 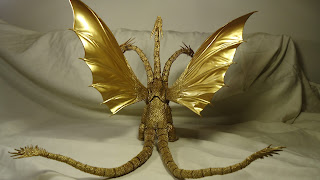 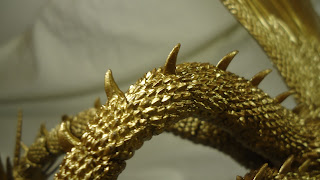 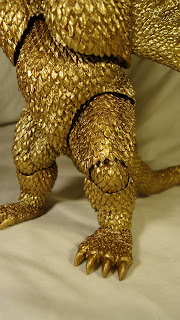 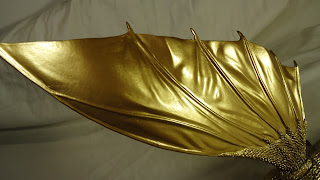 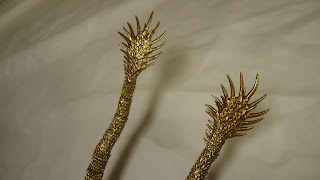 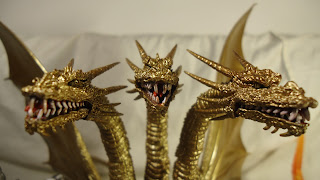 Sculpt (5/5):  As usual, Tamashii NAILS the looking of the monster.  The level of detail on this figure is astounding.  There are the things you would expect from a high end figure...  along with some real surprises.    First off, the proportions are the best I've ever seen on a Heisei Ghidorah figure.  The necks are thin and snakelike, with overlapping scutes on the underside.  A row of sharp looking spines run down the "spine" oif each neck. The wings are gigantic and majestic (stretching to around 20 inches from tip to tip!!).  The horns look fantastic, with a spiraling "unicorn" design on every one.  Ghidorah's faces are very fierce looking, and sport menacing jaws with deadly looking, blade-like teeth.

S.H. Monsterarts King Ghidorah's body and legs are thick and muscular.  His feet end in hooklike claws.  The whole body is covered in diamond shaped scales, resembling snake skin.  His tails are incredibly long and end in a barb covered tip, like some sort of mideval weapon.

One of the more impressive sculptural details is the wavy structure of the center of the wings.  It very much resembles cloth, and is screen accurate.  All in all, the sculpt on S.H. Monsterarts King Ghidorah is awesome, easily rivaling model kits of the monster. 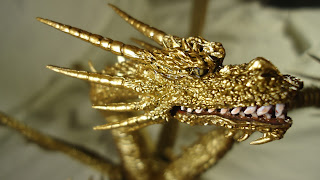 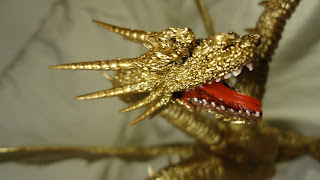 Paint (5/5):  There honestly isn't a lot of detailed paint work on this figure.  What there is, however, is perfect.  His eyes are very sinister, and his teeth are streaked with stains.  Nice details but nothing spectacular. 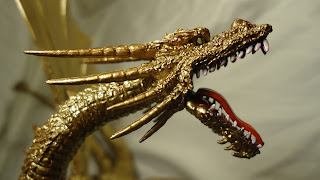 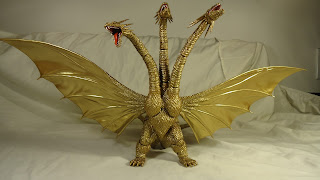 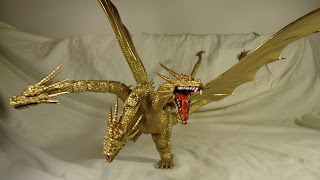 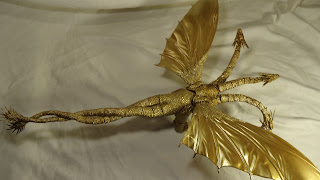 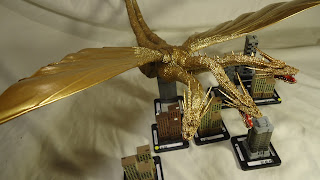 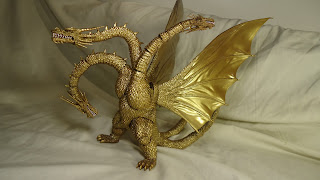 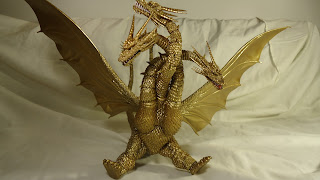 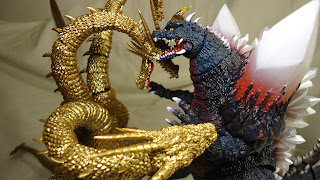 Articulation (3.5/5):  I wanted to score this perfectly, but just couldn't.  As amazing as a lot of the articulation is on this figure, some....  Questionable decisions were made.  First and foremost among them was the wing articulation.  Instead of being on a ball joint (or preferably a double ball joint) the wings join the body with some sort of odd double hinge.  It works for the most part.  However, the left wing is a bit saggy. On a $120+ figure, that certainly isn't an issue that you want to have.  The fact that its a swivel joint makes any sort of repair almost impossible.  It's annoying.

Enough with the bad, though...  Let's move on to the awesome!  There are a metric ton of ball joints on this figure, especially in the necks and tails.  The results?  An incredible range of motion, which allows the necks and tails any type of snake like motion you want!  Ghidorah's necks can wrap around monsters, each other, and even bend really far back.  The tails, too, can twist around things and each other.  This articulation really opens up a lot of display possibilities.

The body is all right.  The legs have a decent range of motion.  There is a slight issue with the torso.  If you examine the inner workings of the figure, the ball joint fits into a strange sort of slanted socket.  As a result the torso is always leaning ever so slightly to the side.  It's barely noticeable, but still...  Why?

All in all, the articulation engineering is excellent in some areas, highly questionable in others.  One interesting thing to note is that Ghidorah's tongues all swivel.  It's odd, but interesting. 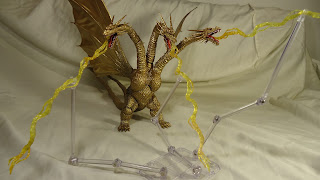 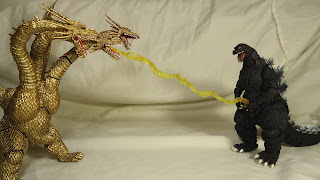 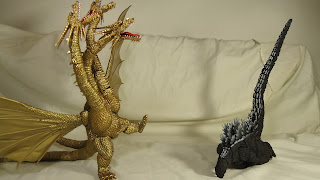 Accessories (1/5): Words cannot describe how much I hate he stands that Ghidorah comes with. They barely hold the beams.  They're overly complicated.  And the end result looks too odd to justify using them.  I literally packed them back up in the box... never to be seen again.  Disappointing...  Especially for the price! 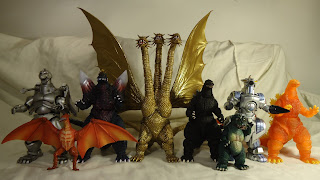 Watch Out!!!  There are two main things you should watch out for regarding this figure.  The first is the fact that the necks might fall off if pushed too far in one direction.  This could easily happen while wrapping Ghidorah's necks around another monster.  Fortunately the necks do pop right back on due to their ball joint.

The second thing to watch out for is the potential fragility of his wings.  For some reason, Tamashii decided to go with a sort of strange internal double hinge.  Overall, the hard plastic of the hinge doesn't seem like a very durable material.  Could be wrong, but it's best not to screw around with it too much.  And that is definitely a let down. 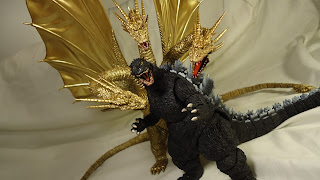 Overall (4/5):  S.H. Monsterarts King Ghidorah had the potential to be the best figure in the entire line.  I don't feel like it quite reaches that potential.  And to be honest...  It's a bit disappointing.  I caution casual fans to really think it over before dropping the $130-150 dollars on this figure.  For die hard Ghidorah and S.H. Monsterarts fans though, this borders on "must have".  Despite its flaws, there's a lot to love.  It looks fantastic in any Monsterarts or six inch Godzilla vinyl figure collection.  It towers majestically over the other figures on the shelf.  And its details are top notch.  On top of that, it has some of the best articulation I've ever seen in its tails and necks.

Just be prepared for the potential issues that come with it. 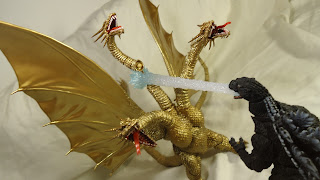 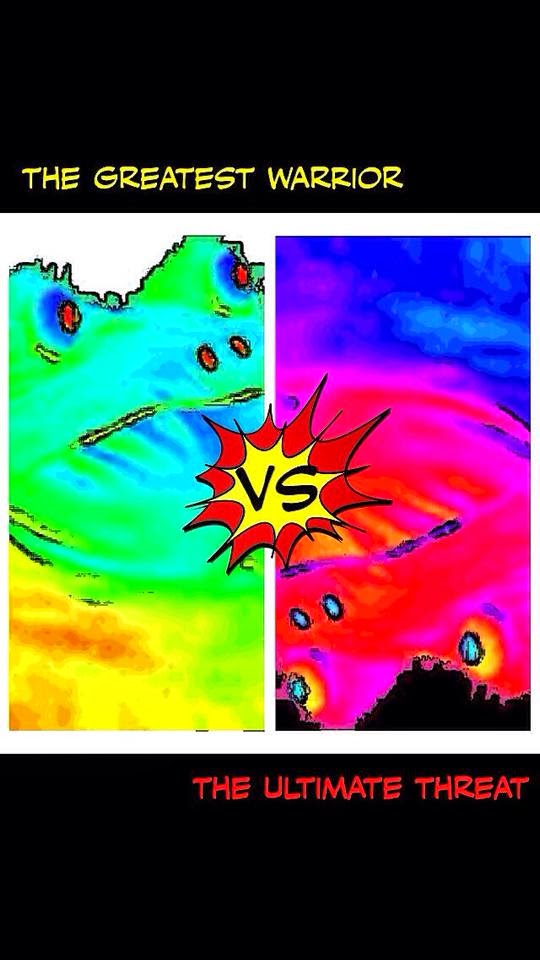