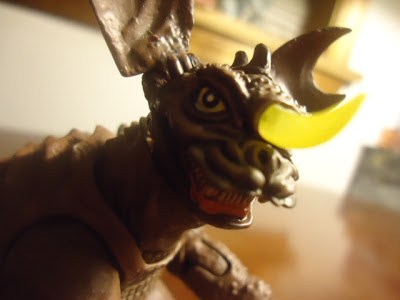 Introduction: The first Toho kaiju in the Revoltech line sparked the first bit of interest of super articulated figures of some of our favorite monsters from Japan, alongside the Daimajin figure in the same line. Baragon, coming straight out of Frankenstein Conquers the World, is a bit on the smaller side, and the Revoltech series of figures is known for releasing subpar figures... but is he an exception? Read on to find out!

Package (4/5): As per the usual, the box does what it should do. The front captures a great picture of the figure itself, and features a window flap revealing the figure inside. The back of the box features the usual promotion pictures of the figure and the accessories. Like other Sci-Fi  Revoltechs, the box holds up well. 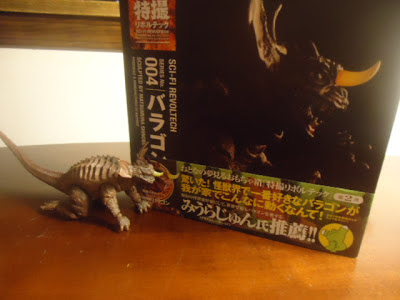 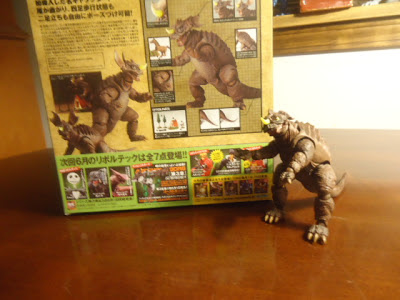 Sculpt (4/5): Despite a belief that most Revoltech figures have some of the weakest sculpts around, this figure is a great example of how to break the trend. The bumps on Baragon look and feel completely natural. The ridges on the back are very sharp and feature small grooves almost as if the suit is trying to be emulated. Also, the horn is sculpted in a nice semi-translucent plastic. Unfortunately, as is the case with most Revoltechs, the sculpt is broken up in some places, like the legs. To some, like this reviewer, this can be extremely noticeable in some poses. 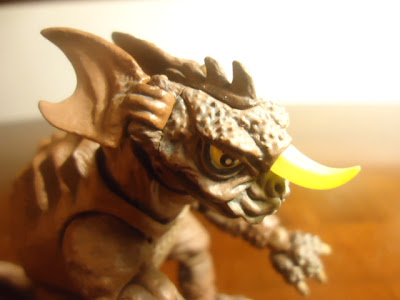 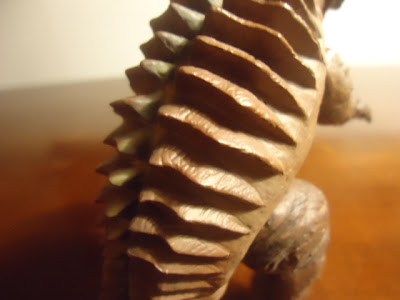 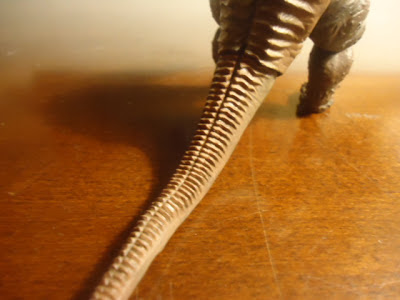 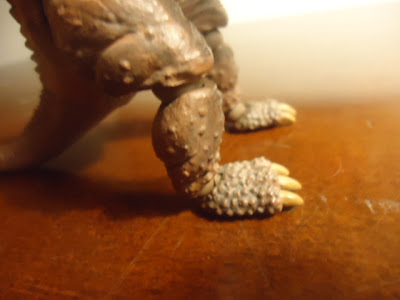 Paint (5/5): The paint application on Baragon is absolutely fantastic. The horn is slightly painted, the mouth features great applications, the claws have effort put into the final product, the back features a smokey wash to it, and this reviewer could continue on and on for two posts over the awesomeness the applications. Also, unknown to some, most of the figure has a slight blue wash over it that really captures the grooves in the figure well. 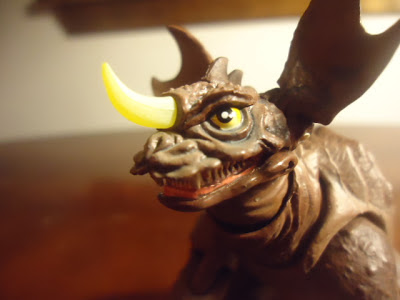 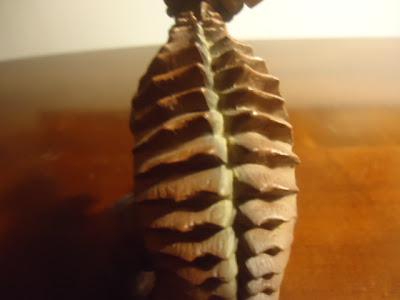 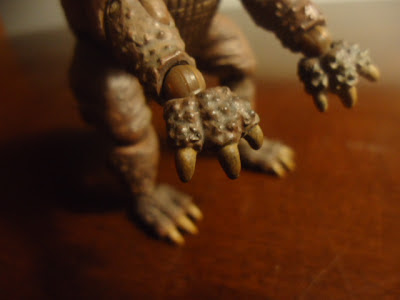 Articulation (4/5): Baragon's articulation meets the basic standards one would expect from this figure. Every joint on it is a Revoltech joint except the elbows, tail, mouth, and ears. As one with experience with Revoltech joints would know, while they tend to be strong and not loosen up over time, the range of motion with this type of joint is limited.

The ears, mouth, and elbows are all on hinge joints and flow almost seamlessly with the figure. The tail is connected to the body with a Revoltech joint, though the tail itself has a wire inside of it. Be sure to read the Watch Out! section for more details. 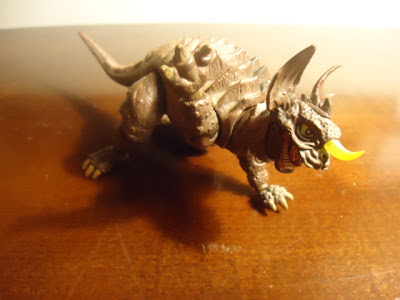 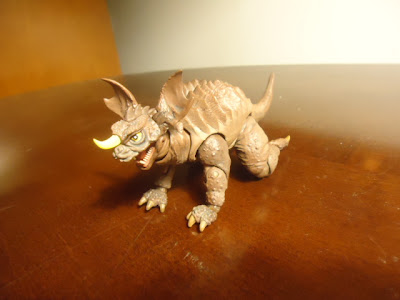 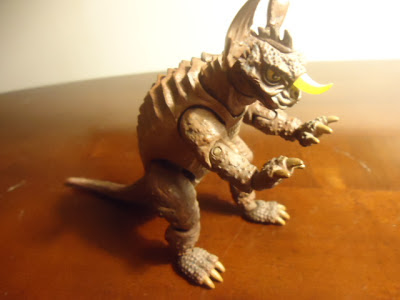 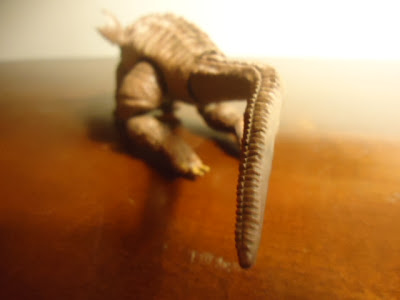 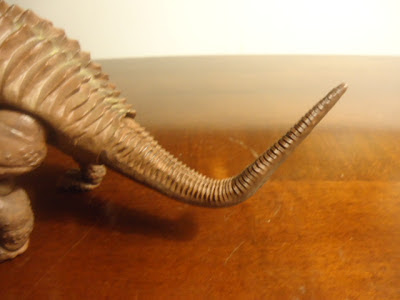 Accessories (4.5/5): The accessories included with Baragon are really fun and have great detail. The house sports a dent in it, two tress are included with different sculpts, and the horse has surprising detail. These accessories are not crucial to adding to the figure itself, such as an effects part, but they do help to set up a makeshift diorama for a collector on the shelf. Also, forced perspective shots make some interesting photos, as shown below. The only accessory missing from this set would be a flame breath with Baragon. After examining releases that came after this one, one simply has to wonder why this piece was omitted. 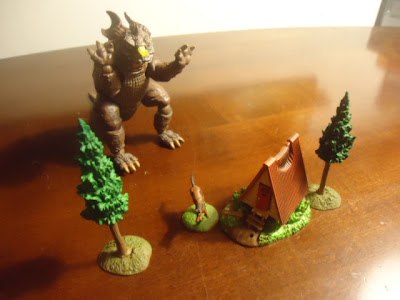 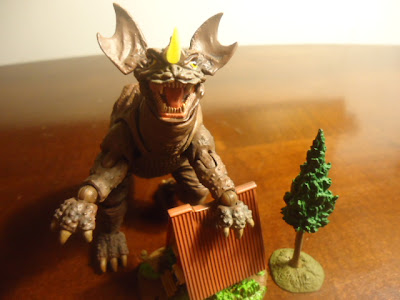 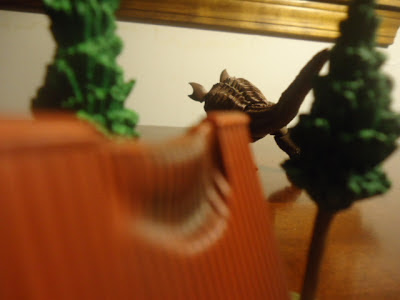 WATCH OUT!: First, be careful with the tail. The wire can snap easily, and considering other releases, this is the only figure this reviewer owns from Kaiyodo that features this style of articulation that still has the wire in one piece. Second, be careful of the hard plastic used for the horn and ears. If not handled properly, it would not be a shocker to discover they break easily.

Overall (4/5): This figure was a great start into the Sci-Fi Revoltech line for Toho kaiju. Despite being an older figure, it can still be purchased for around $35 depending on where one looks. Baragon is a solid figure and, despite being older, it would be a somewhat difficult task for Tamashii Nations to outshine this figure, which may be a viable release given the recent display of Godzilla (1964). However, only time will tell! Pick this figure up if you can!

Uh oh... Why is Godzilla here? 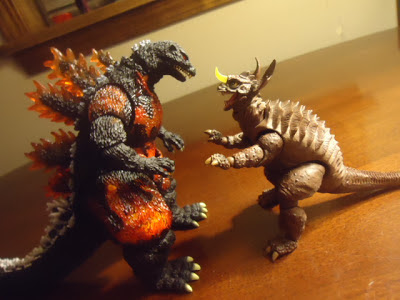 That's right, folks! We here at Import Monsters are going to plan a whole week dedicated to Godzilla and his friends! Starting the week of February 27th, to celebrate the release of the S.H. MonsterArts Destoroyah, more information on the S.H. MonsterArts Godzilla (1964), and Tamashii Features vol. 5, we will deliver one post every day that has to do with the Godzilla universe. Reviews, overviews, cool pictures, so on and so forth! Stay tuned for the first post starting the 7-day festival!