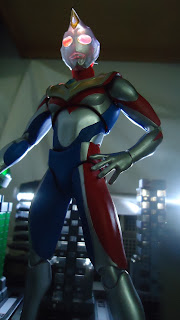 Introduction:  Ultraman Dyna has been getting a LOT of love in recent years.  Although his series ended more than a decade ago, he has been popping up in recent Ultraman films (including an extended cameo in Mega Monster Battle: Ultra Galaxy and a starring role in this year's Ultraman Saga).  Taking into consideration this recent exposure, it's no surprise that he received the high end treatment in Bandai/Tamashii's Ultra-Act line.  Now, I'm not going to pretend Dyna is my favorite Ultra hero.  And after the more serious Ultraman Tiga, Dyna's lighthearted tone just didn't sit right with me.  However, excitement for his figure was high for one specific reason:  He is sculpted using the new 2.0 type body.  So how is the figure?  Read on and find out.. 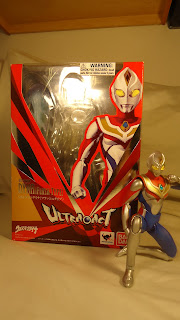 Package (4/5):  If you've seen the newer packaging style, you know just what you're going to get.  It is shiny, with reds, silvers, etc,  There's a nice window allowing you to see the figure and a large picture of the figure on the right front side.  On the back, there are several promotional shots.  They are situated in several action poses, which acts as a guide on how to display your figure.  The packaging is starting to get a bit boring, as it isn't much different from what we got with all the recent releases. 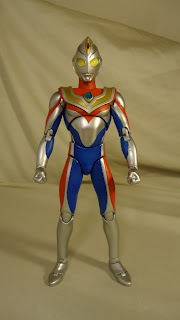 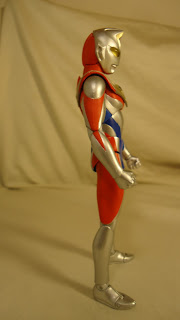 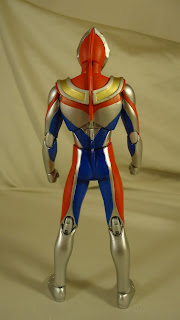 Sculpt (5/5):  Absolutely love the sculpt on the 2.0 body;  It's a bit bulkier and more realistic than Tiga, and overall looks a lot more "heroic".  There are some nice intricacies here and there, specifically on the helmet crest and the grooves all over his body. The chest piece looks real nice and fits snugly on the bulky torso.  The fit is much tighter than Tiga's chest piece.  Though relatively simple, this is overall a very appealing sculpt.  A definite improvement over the original body style. 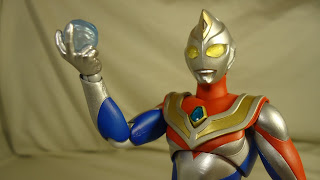 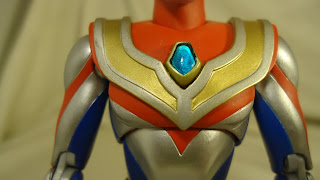 Paint (4/5):  The paint job is, unsurprisingly, pretty good. It's not surprising because Dyna's paint ops are pretty much limited to "staying in the lines."  Which it does fairly well.  There are, however, some slip-ups which detract from the score, especially in the areas which are painted silver.  It seems like the silver bits slop a tiny bit over the lines more often than not.  This can be seen clearly in the photo above on Dyna's right arm.  It's not too noticeable, though.  You have to inspect very closely to even see it. 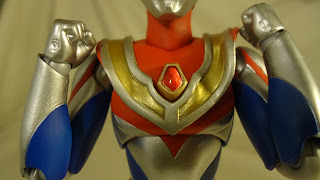 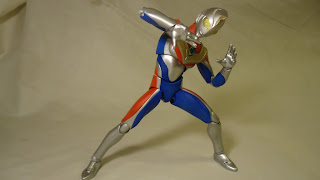 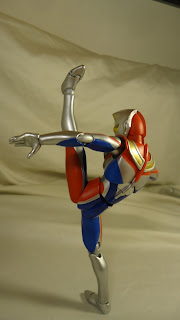 Articulation (5/5):  Like most Ultra-Act figures Dyna has a superb amount of articulation.  He sports the following:  A hinged head, a ball jointed neck, shifting ball joints where the torso meets the shoulder, swivel shoulders, double hinged elbows, swivel/ball wrist joints, a ball jointed mid torso, a ball jointed lower torso, shifting ball jointed hips, additional internal swivel joints in the hips, double hinged knees, swivel/hinged/rocker ankles (allowing up and down as well as side to side ankle motion), and hinged toes.  Pretty much any position the human body can achieve (within reason) can be duplicated with this figure.  Particularly amusing is the pitcher position the figure can hold.
Aiding this posability are improved joints.  Any issues with the 2.0 body that Gaia and Agul had regarding really loose joints have been ironed out.  All of Dyna's joints are reasonably tight, to the point where he can stand on one leg! 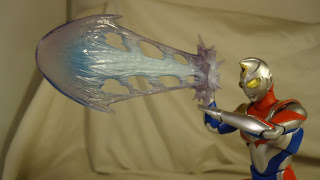 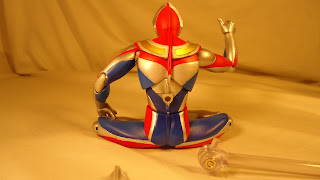 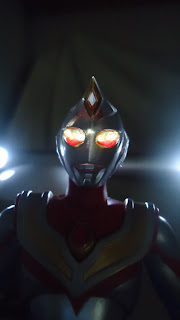 Accessories (5/5):  Dyna comes with a good amount of accessories to simulate several attacks and poses from his television series including:  Several alternate hands ( standard fists, splayed fingered hands for lifting/grabbing poses, "chop" hands for attacking/simulating the Solgent ray firing pose, a hand holding an energy ball for the Ultra Fork attack, and a "thumbs up" hand), a Solgent ray piece, a translucent-backed head for back lighting (which causes the eyes to shine), an extra bent chest piece (to accommodate the arms when in the Solgent ray firing position), an interchangeable red color timer, and a swap-out triangular piece for the lower back (to allow the peg from a Tamashii stand to be inserted).  Overall a good amount of accessories that truly enhance the value and posability of this figure.  The back lit head and Solgent ray pieces are particularly cool, and allow for some pretty cool display possibilities! 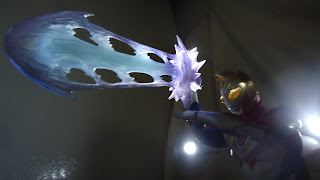 Watch Out!  As always, there are very small parts that come with this figure.  It's not recommended for children!  On top of that, the small triangular swap out lower back parts could easily be lost if care isn't taken. 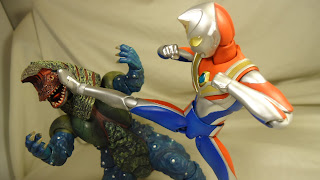 Overall (4.75/5):  All in all, Ultra-Act Ultraman Dyna is an excellent figure with a few very minor flaws.  I highly recommend it to fans of the character, and Ultraman fans in general!  He looks and displays great, whether he's striking a dramatic pose or tangling with a monster on your shelf!
at 10:52 PM
Email ThisBlogThis!Share to TwitterShare to FacebookShare to Pinterest
Labels: Reviews, Ultra-Act