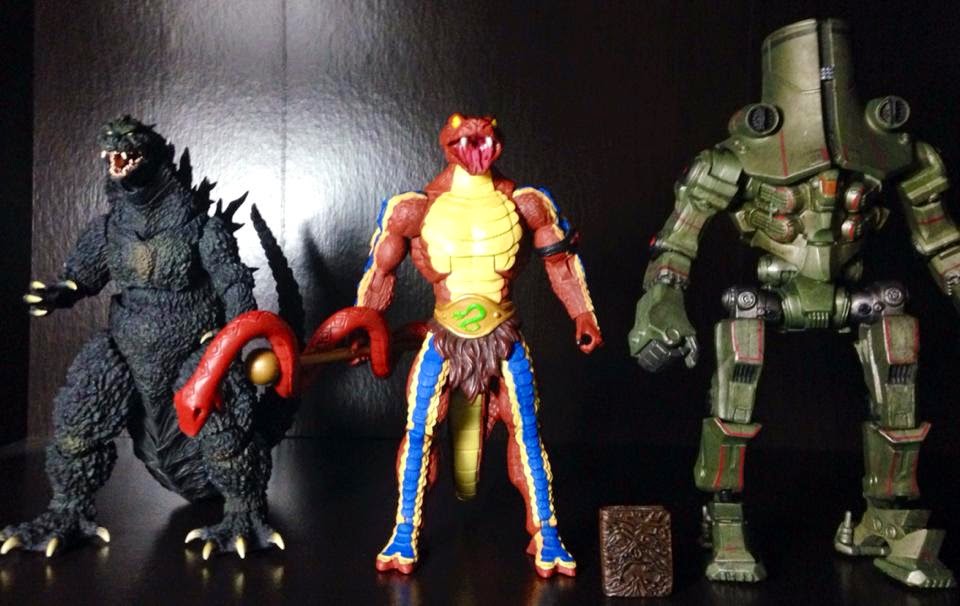 The first toy I'll be reviewing for "Figures I Like From Lines I Don't Collect By Companies I Hate Week 2014 " (it just rolls off the tongue!) is a  very nostalgic piece for me. It's a figure from the He-Man series, or rather the Masters of the Universe Classics line by Mattel:  Rattlor!!  I had the original Rattlor when I was a kid in the 80s, and he was one of my favorites.  He sported a neat collapsible neck that could stretch out for viper bite action, and his body made a rattling sound when you shook him...  Just like a real snake!  This was so freakin' cool to five year old Justin, and more often than not the heroic toys ended up dying horrible, venom related deaths.  I was just warped that way.
Fast forward over two decades to the current MOTUC line, and the announcement of Rattlor himself.  Initially I was very excited.  Why wouldn't I be?  This was essentially the figure I had loved all those years ago, only larger and super articulated.  I'd be nuts to pass that up, right?  But pass it up I did, and whether it was due to lack of funds or my dislike of Mattel in general, I don't recall.  Oh I didn't mention that I don't like Mattel? 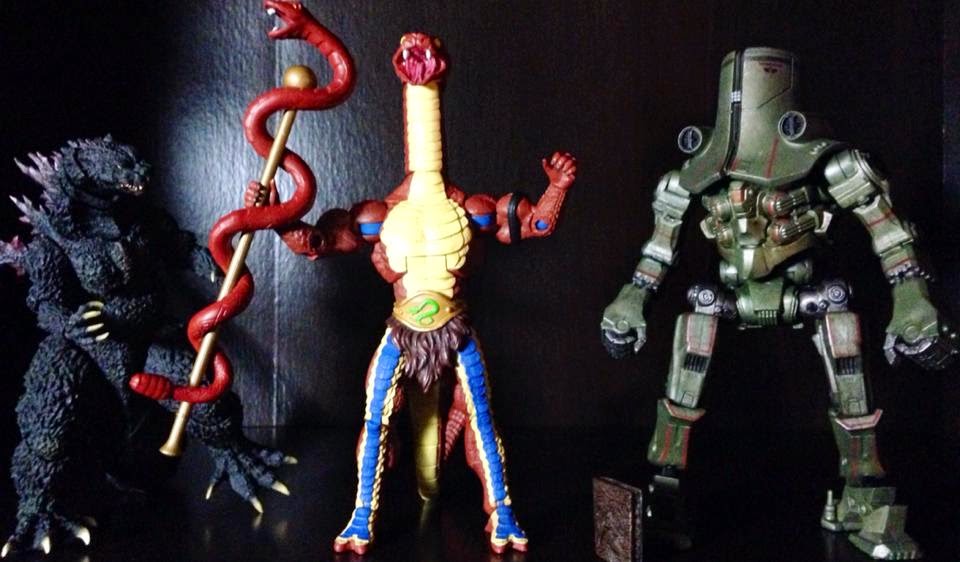 I don't like Mattel.  I have my reasons, of course.  The lion's share of that dislike comes from being a former DC Universe Classics collector, and from experiences a close friend had collecting their MOTUC line.  Half assed QC, odd character selection, and excessive reuse of parts turned what should have been THE definitive DC line into a monotonous mess.  Which is interesting seeing as Mattel has a very talented team of sculptors (known far and wide as The Four Horsemen) at their disposal.  But hey, I guess even really good stuff starts to look like crap after reusing the same buck for the thousandth time, or after the factories have chewed it up and spat it out....
I hopped off The Completist Express around Series 4, though I continued to cherry pick occasionally(often to my disappointment).  Now regarding my good pal and MOTUC...  I'm not gonna go into too much detail, but that line was a collector's nightmare of delays, garbage QC, and holy crap! the reuse.  Pretty much Mattel's usual, but amped up to extremes.  I wouldn't wish that subscription hostage situation on my worst enemy.  Long story short, I don't consider Mattel a collector friendly company.  Therefore, they are generally quite useless in my eyes.
At any rate, the aforementioned friend just so happened to have a Rattlor with him the other day, and he hooked me up.  Been messing with him for a while, enough so that I have a general idea of the quality.  So did Masters of the Universe Classics Rattlor Delight or Disappoint?  Read on and find out...


Packaging(N/A):
Now ya gotta settle for an N/A here.  Got this figure with all accessories, but sans package.  From what I recall though, the MOTUC packaging isn't anything outstanding.  The only differences being the name on the front and the bio on the back. 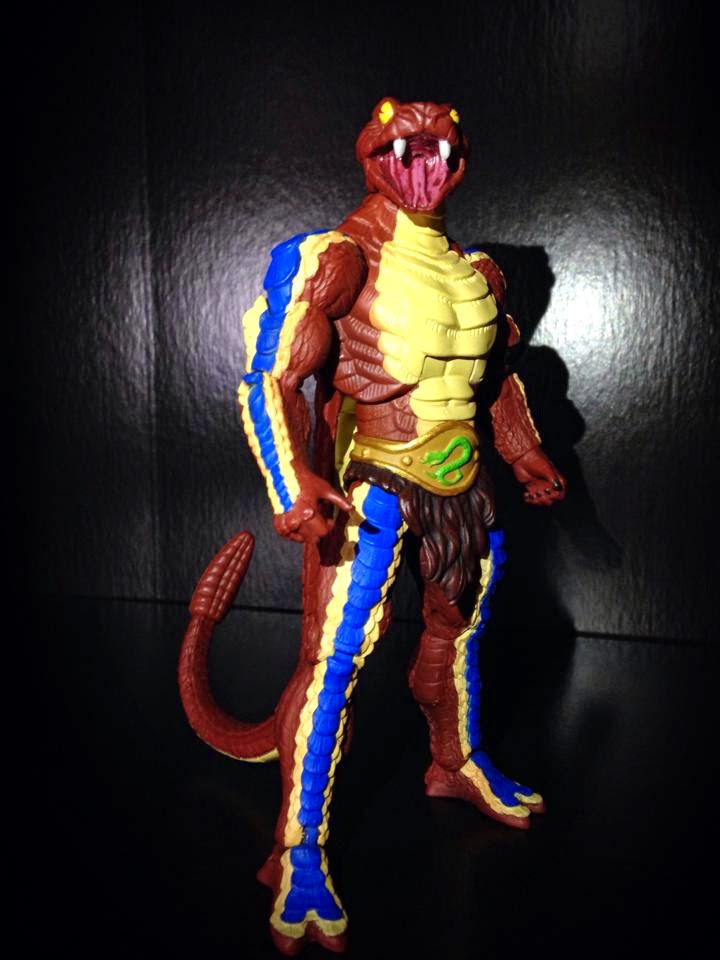 Normally when it comes to the sculpts on DCUC and MOTUC figures, the overall uniformity is off putting.  Rattlor however, seems to actually have a lot of unique parts.  This is most likely due to his snakelike, scaly skin.  Starting at his entirely (Read: Refreshingly) inhuman countenance, his face resembles that of a poisonous viper.  Hornlike overlapping scales crown the top of his head, and he has he bulging eyes and flaring nostrils of a rattlesnake.  Inside Rattlor's gaping maw are twin fangs, and a serpentine tongue.  The detail really is excellent, and looks like something you might find on a safari snake replica. 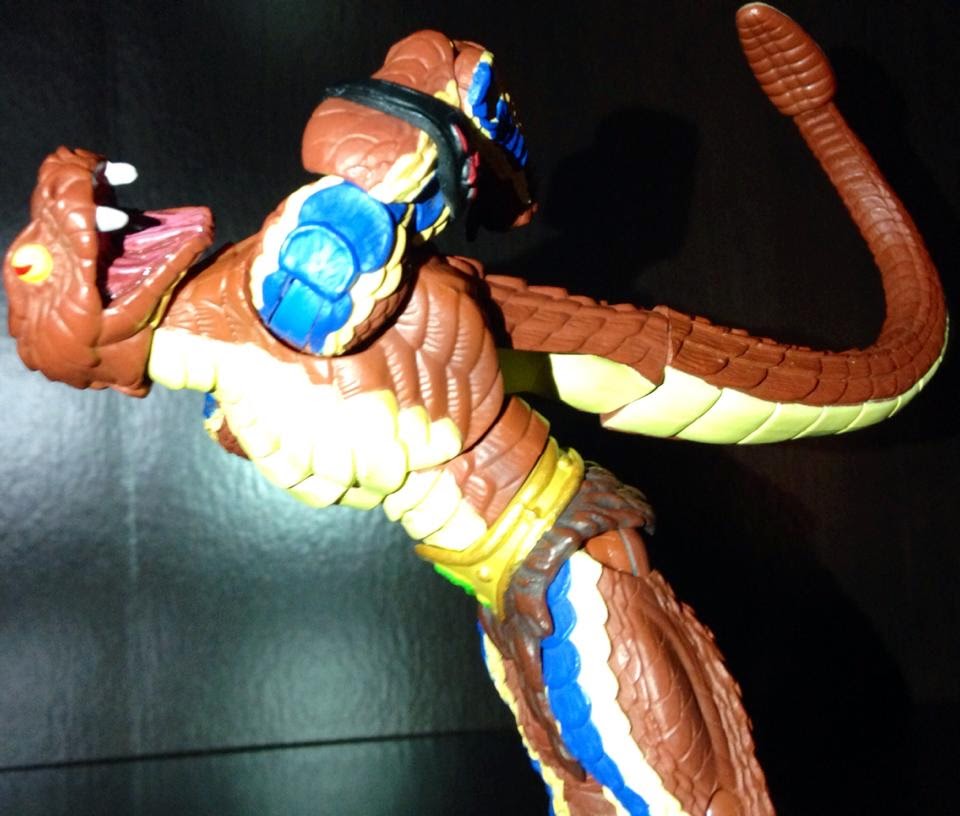 Moving down his torso is several layers of overlapping, scutelike armor.  Similar armor also flows down the  back of his neck to his...  Back tail.  Whaaaaat???  Okay, gotta be honest, the back tail is weird.  Instead of coming off where you'd expect at the end of the spine, it actually comes off the upper back like a sort of odd cape.  This can be rather distracting, and I wish they had attached it more organically.  On the end of Rattlor's tale sits his trademark rattle. 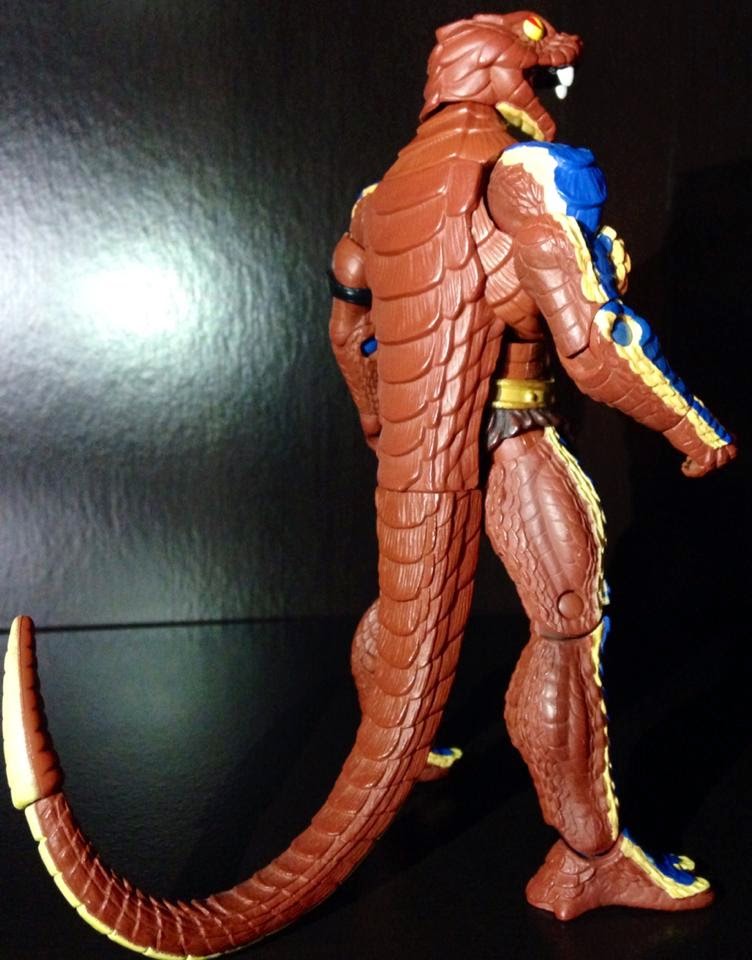 The patterns of the scales on Rattlor's arms, legs, hands, and feet are considerably more complex, almost resembling tribal adornments.  The effect is rather cool, and serves almost to make him appear royal.  Around Rattlor's pelvis is a furry loincloth, and it looks rather silly and out of place.  However, a belt is affixed to the um, hairy underwear, that bears the symbol of the Snakemen.  Casting doubt on his loyalty, however, is a band over his left arm that has the symbol of The Horde on it.
Overall the sculpting on this guy is top notch, save  a couple somewhat minor complaints.  Not the least of which is that weird back tail.
Paint (3.5/5): 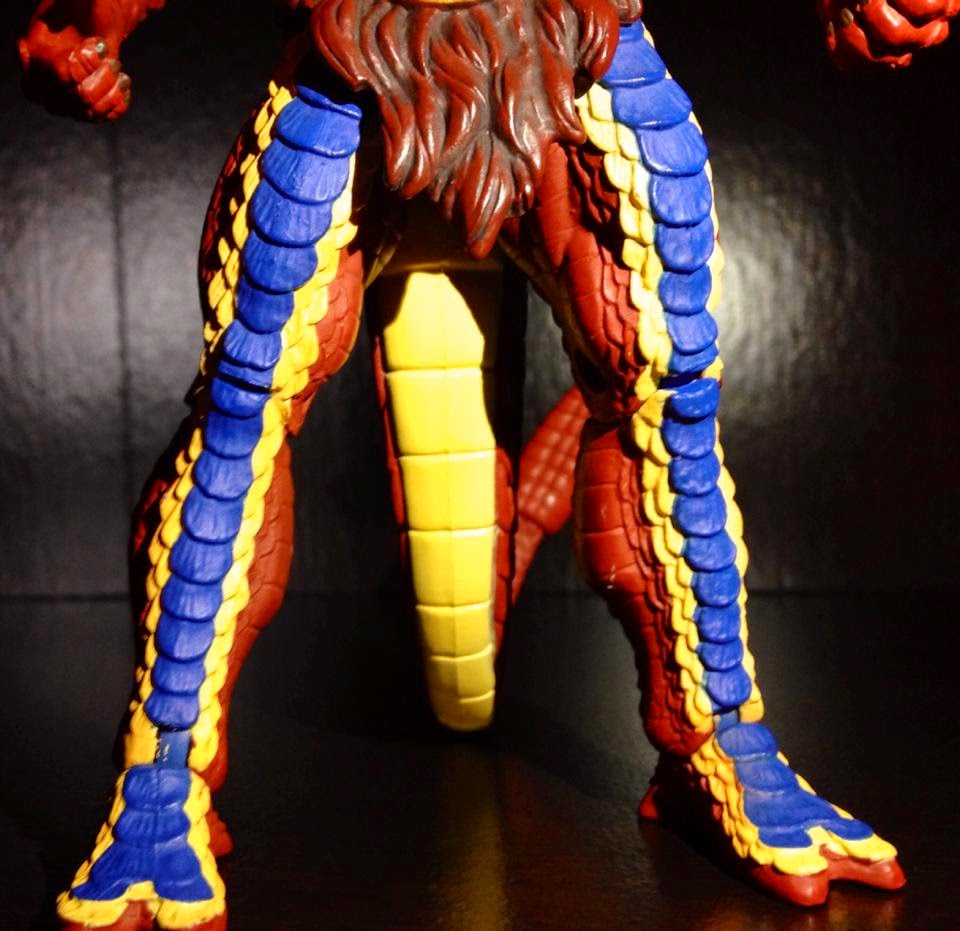 The overall paint on this guy is really nice, save a single glaring error...  and a few minor ones.  Overall Rattlor's main body is a nice shade of Brick Red, with a yellow underside.  No doubt this is to mirror the tendency in real life for snakes to have contrasting underbellies. The arms and legs have blue stripes running down the center, bordered on each side by yellow stripes. 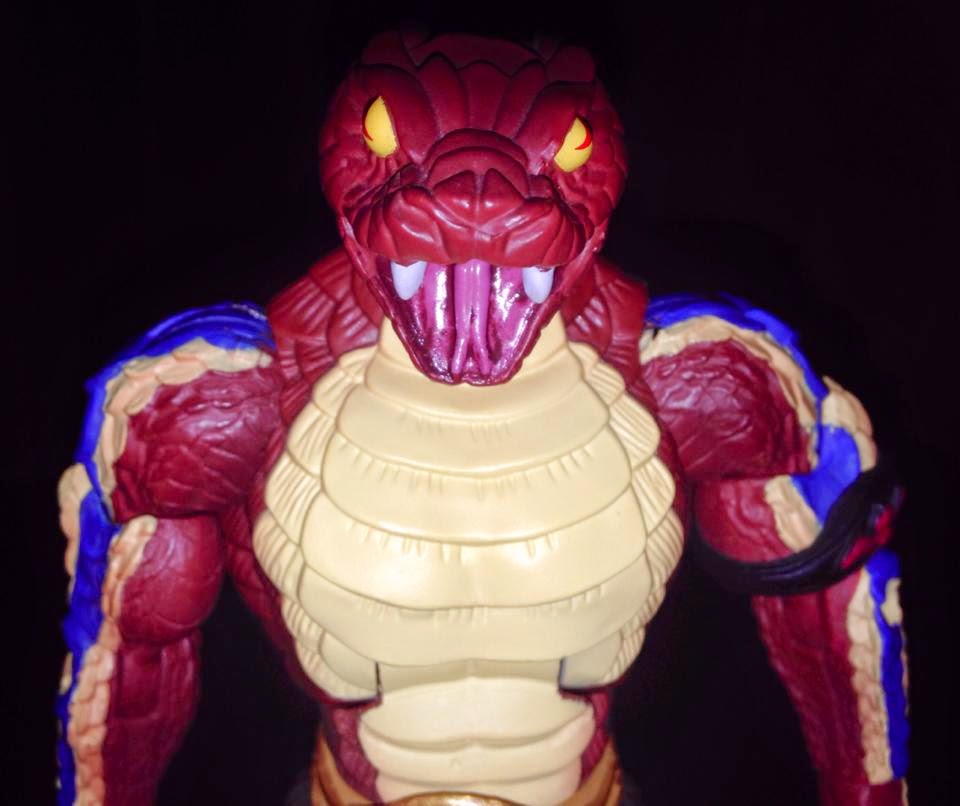 Now I mentioned a "glaring" error....  Rattlor seems to suffer from a bad case of Derp Eye Syndrome.  One slit snake pupil is painted almost straight up and down the eye....  While the other is painted straight across!  Aside from that there's only minor slop, but the eye issue is definitely irritating.
Articulation (3/5): 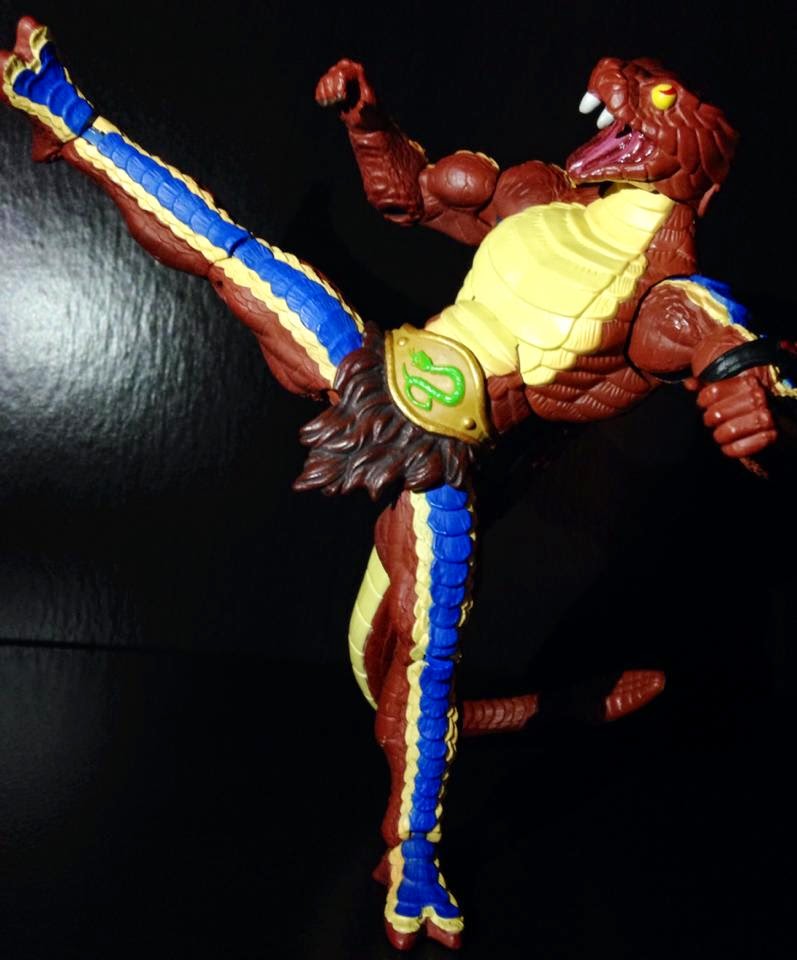 When it comes to this figure's articulation, "missed opportunities" seems to be the name of the game.  Remember that weird back tail I told you about?  It sports a single point of articulation.  This looks awkward no matter where you turn it, but beyond that, why only one?  This is a "collector's figure" with "super articulation", so what gives?  Missed.  Opportunity. 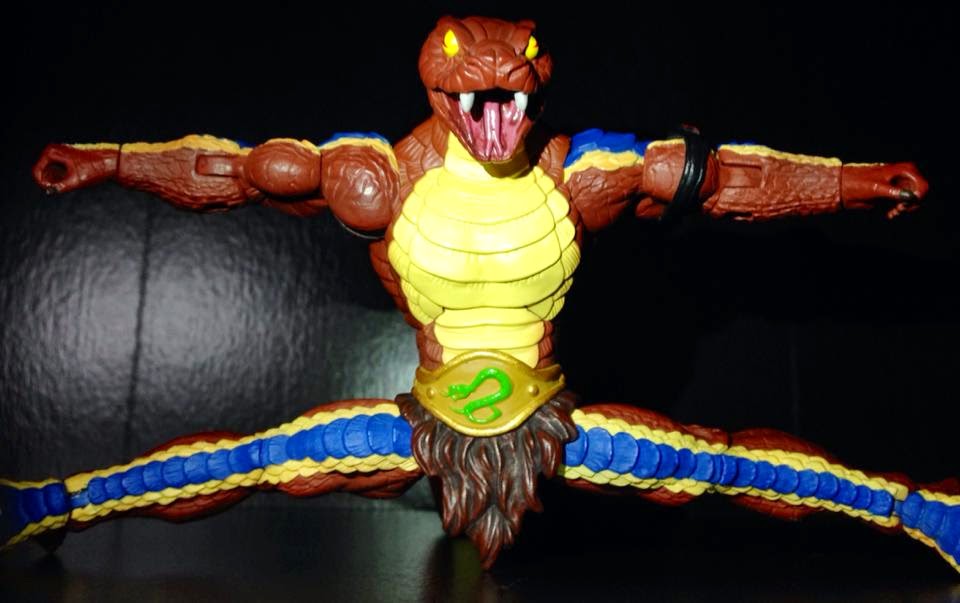 Now if you're familiar with MOTUC's general articulation, you pretty much know what to expect.  A ball jointed neck starts us off, as well as a hinged jaw.  Wait.  Wait a minute.  What??  There's no jaw articulation on this guy??  Why not?  Just like the tail I feel like we've stumbled into Missed Opportunity territory.
The arms are nothing mind blowing, with swivel/hinge shoulders, a swivel bicep, hinged elbows, and swivel wrists.  They have a decent overall range but don't expect S.H. Figuarts quality posing.  An ab crunch allows him to lean down an "astounding" 30 degrees (which swings his goofy ass back tail upward...  Joy.), although a swivel waist allows a surprising amount of action posing. 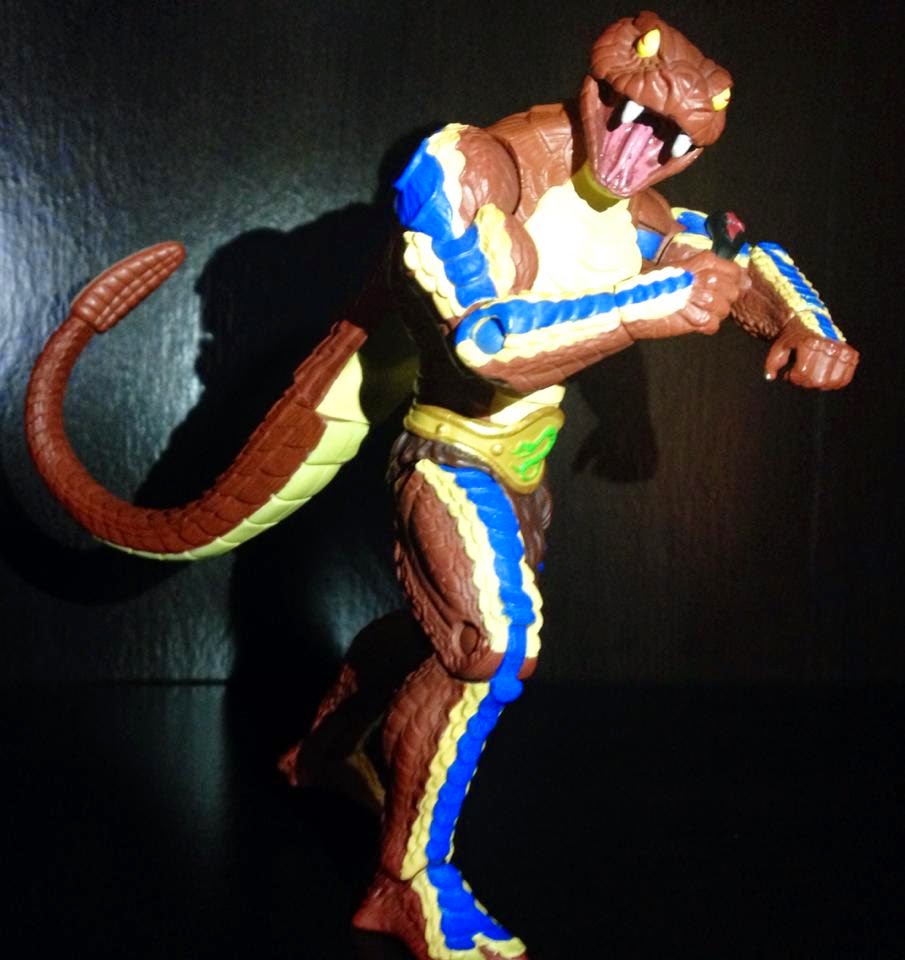 The hip articulation is a fairly average swivel hinge that allows for some decent movement.  Rattlor can do a split, and the hairy underwear is soft rubber, so that the forward motion of the legs isn't impeded too badly.  He can't side due to interference from the back tail.  No good ever came from that freakin' back tail.  Right below the hips there is a swivel, which allows the entire leg to rotate from side to side.  The knees are typical hinges, and the ankles are hinge/rocker combination joints. 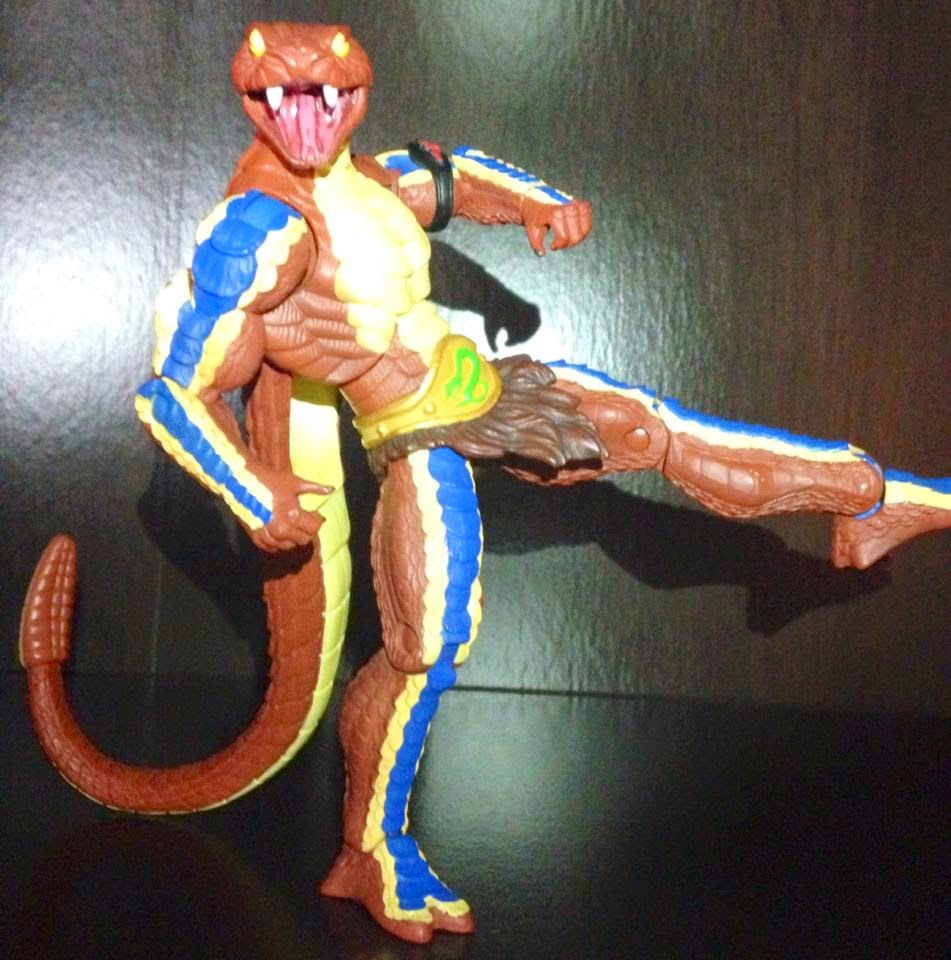 The ankles are by far the most frustrating joints, as they're very loose.  This makes it difficult to pose Rattlor standing on one foot or running.  Major points off, as that's my favorite thing to o with my two legged figures...
Overall the articulation is a mixed bag of decent, disappointing, and frustrating.  That's Mattel for ya.
Accessories (3/5): 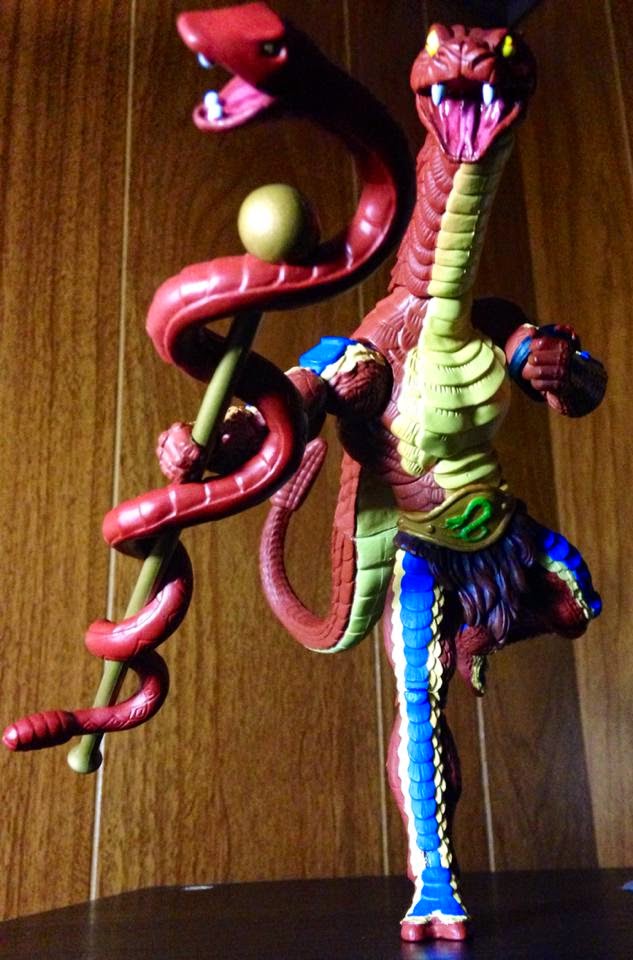 Oh look, another missed opportunity!!  How exciting!  In lieu of a collapsible neck, Rattlor comes with a swappable stretched neck.  The neck, though long, sports no articulation whatsoever.  As a result, it can seem rather stiff.  On the upside, it raises his height from around 6.5 inches to over 8! 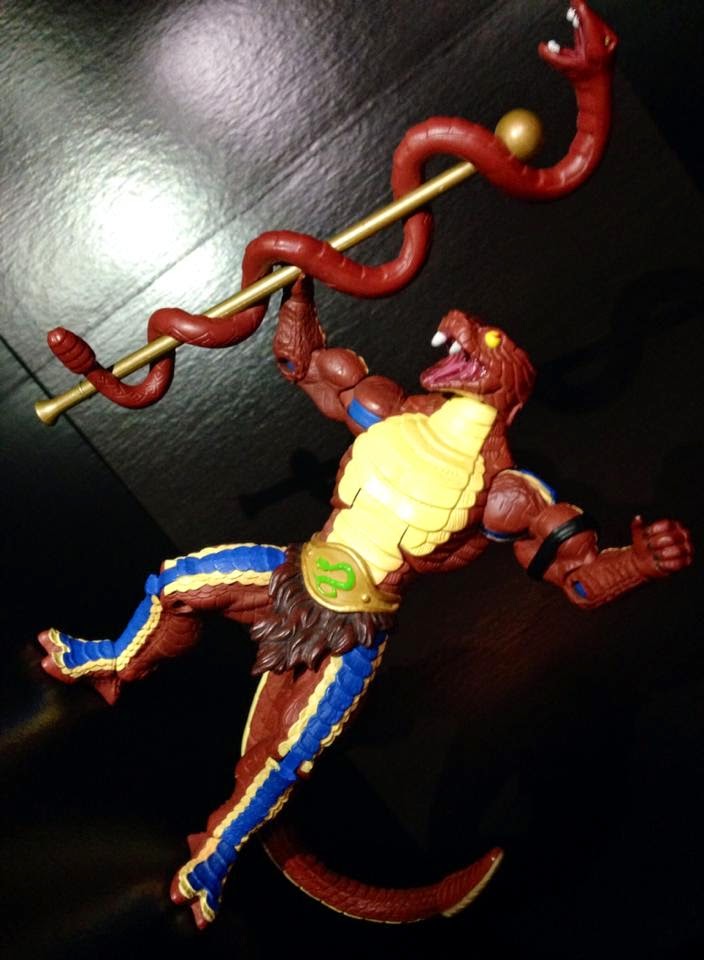 Rattlor also comes with what looks like a repainted King Hiss staff.  Despite being rather ornate, it's also quite boring.  An extra sword or blaster would've gone a looooong way toward making this figure more interesting overall.
Watch Out! 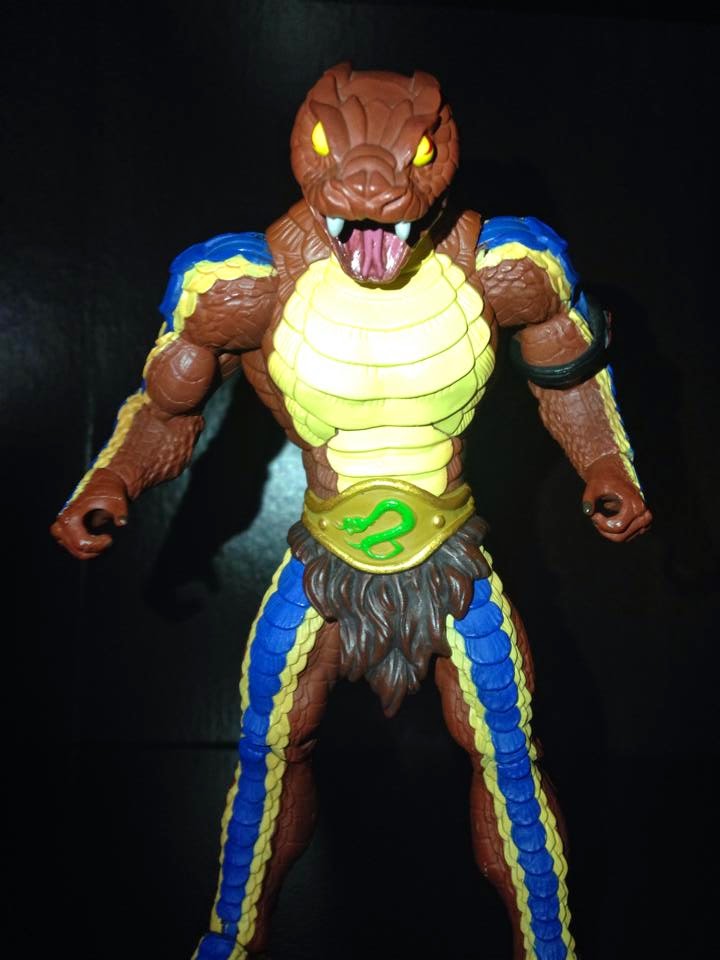 Hahaha!  For what?  It's Mattel.  If the toy had been cool enough to be dangerous, they would've neutered it anyway.
Overall (3.5/5): 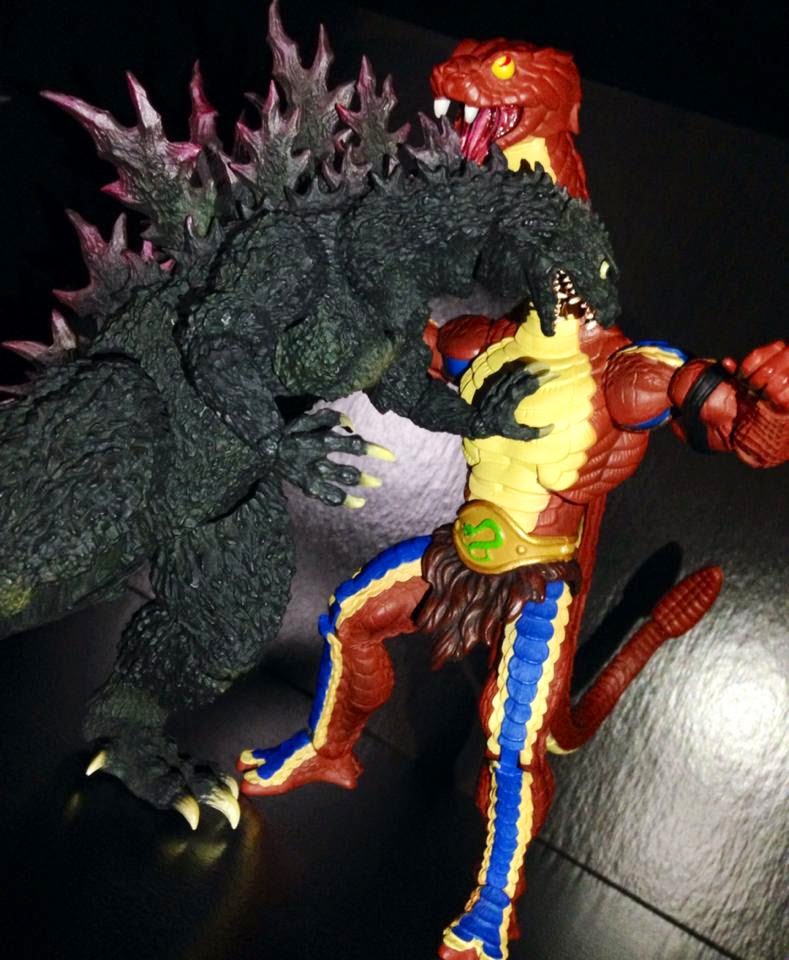 Rattlor represents a trip down memory lane for me.  As one of my favorite toys growing up, it was only natural that I pick up this figure.  And it works pretty well as a tribute, despite some missed opportunities,  Would I recommend this to non fans?  I dunno...  You like reptile men?  You a fan of Bossk or The Gorn?  Do the Sleestaks float your proverbial boat?  If you answered yes to any of those questions it may be worth grabbing.  But not for 30-40 bucks.  No way. 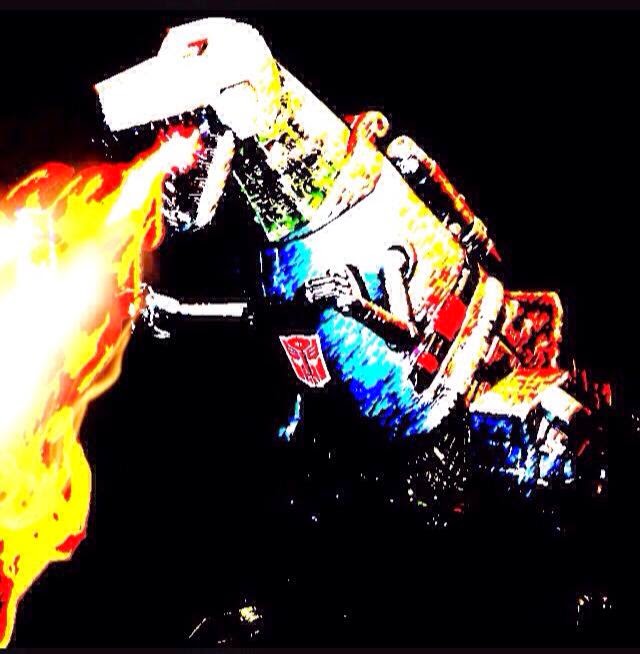 Hope you all enjoyed tonight's review.  Join us again tomorrow for my review of Hasbro's Transformers Masterpiece 08 Grimlock!  And of course if you have any comments or disagree with us in any way, make sure and comment below!

at 3:11 AM
Email ThisBlogThis!Share to TwitterShare to FacebookShare to Pinterest
Labels: Figures I Like From Lines I Don't Collect By Companies I Hate Week 2014