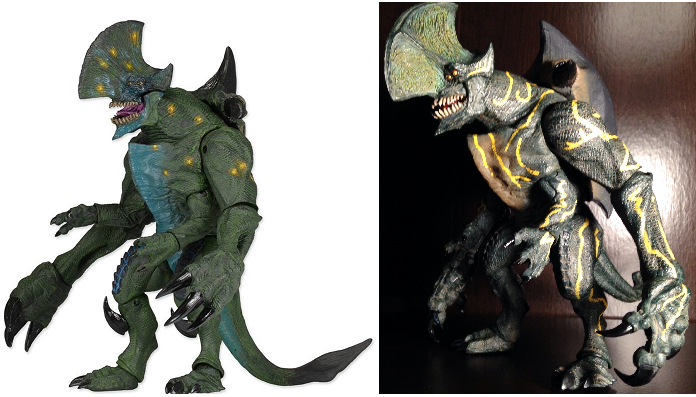 At first glance, NECA's new Pacific Rim kaiju, "Concept Axehead" (due out for release October 2014), looks like a mere repaint of the Series 3 release "Trespasser".  And indeed they are superficially similar.  However, a closer look reveals that more effort and care was put into this release than a simple new coat of paint.  Here are the differences, some of which might surprise you:

1.  The Upper Head is a Brand New Sculpt!
While similar to the old axe-shaped cranium, this sculpt is actually new.  There are two significant differences:
First the axe itself, which appears smooth on Trespasser... Is frayed and worn on his Concept counterpart.  This was to reflect that the beast had been through many battles prior to his appearance in the film.  This was changed when the plot called for each kaiju to essentially be a brand new creature. 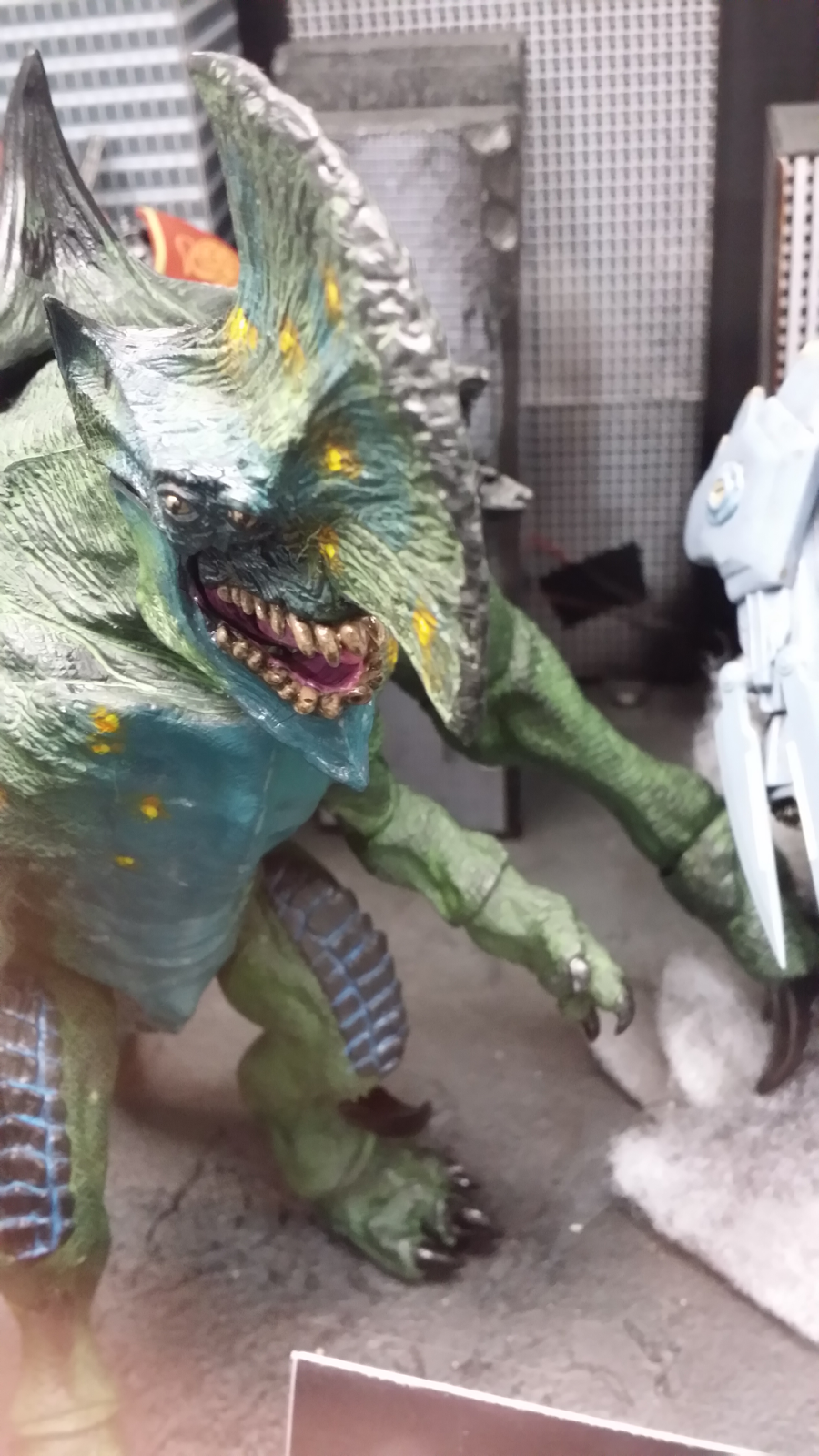 The second significant change is to the crown of horns on the back of Trespasser's skull.  As you can see in the picture below, he has four small horns behind the large, axe-like crest. Axehead, however, only has two horns on the back of his head. 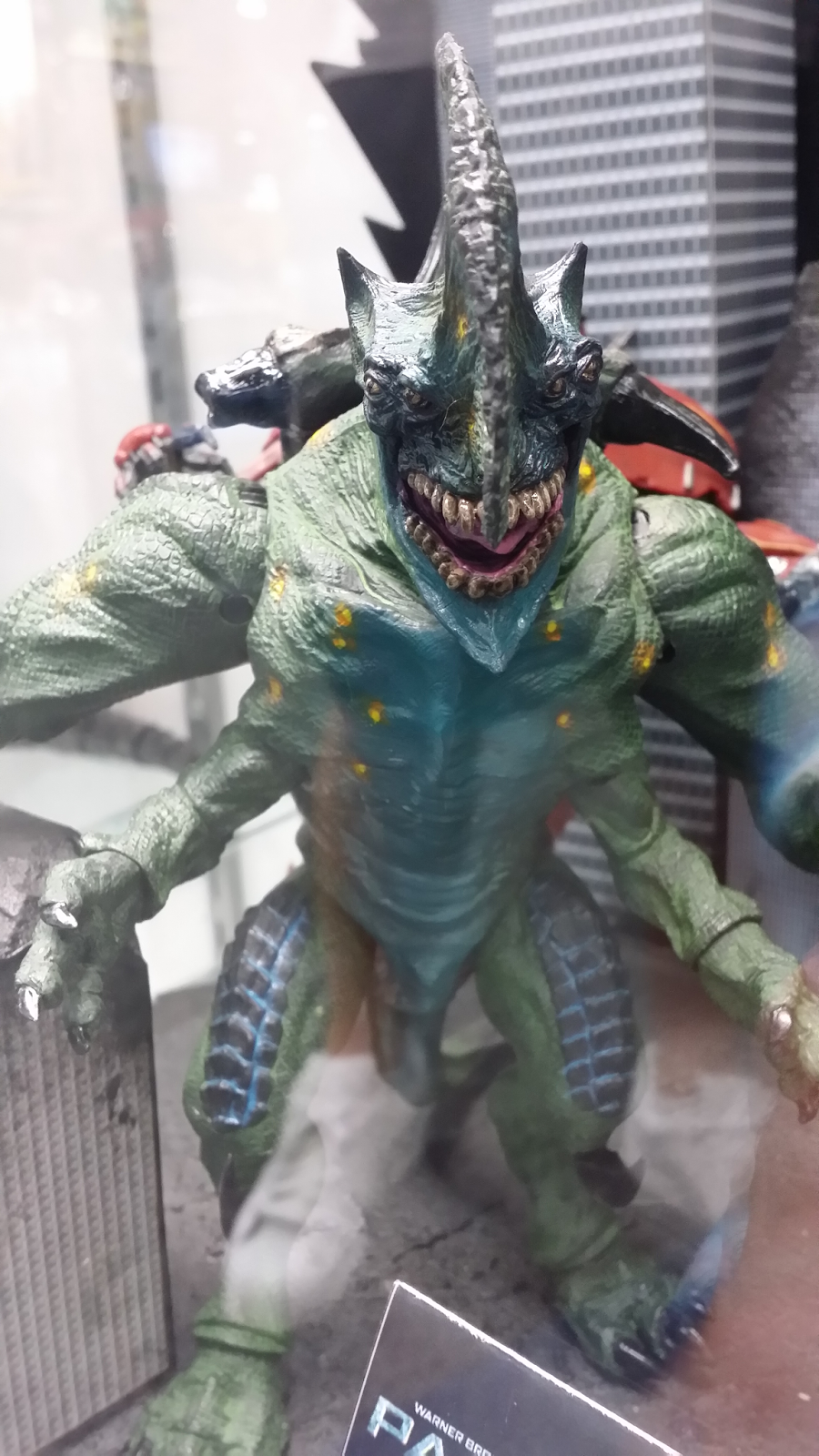 A kitbash occurs when parts from one figure are combine with parts from another to create something new.
Trespasser and Knifehead sported large talons on their larger set of arms. Here we see paws that were lifted from the mold for the kaiju, Scunner.  They are large and paw-like, unlike the talonesque claws on Trespasser and Knifehead. 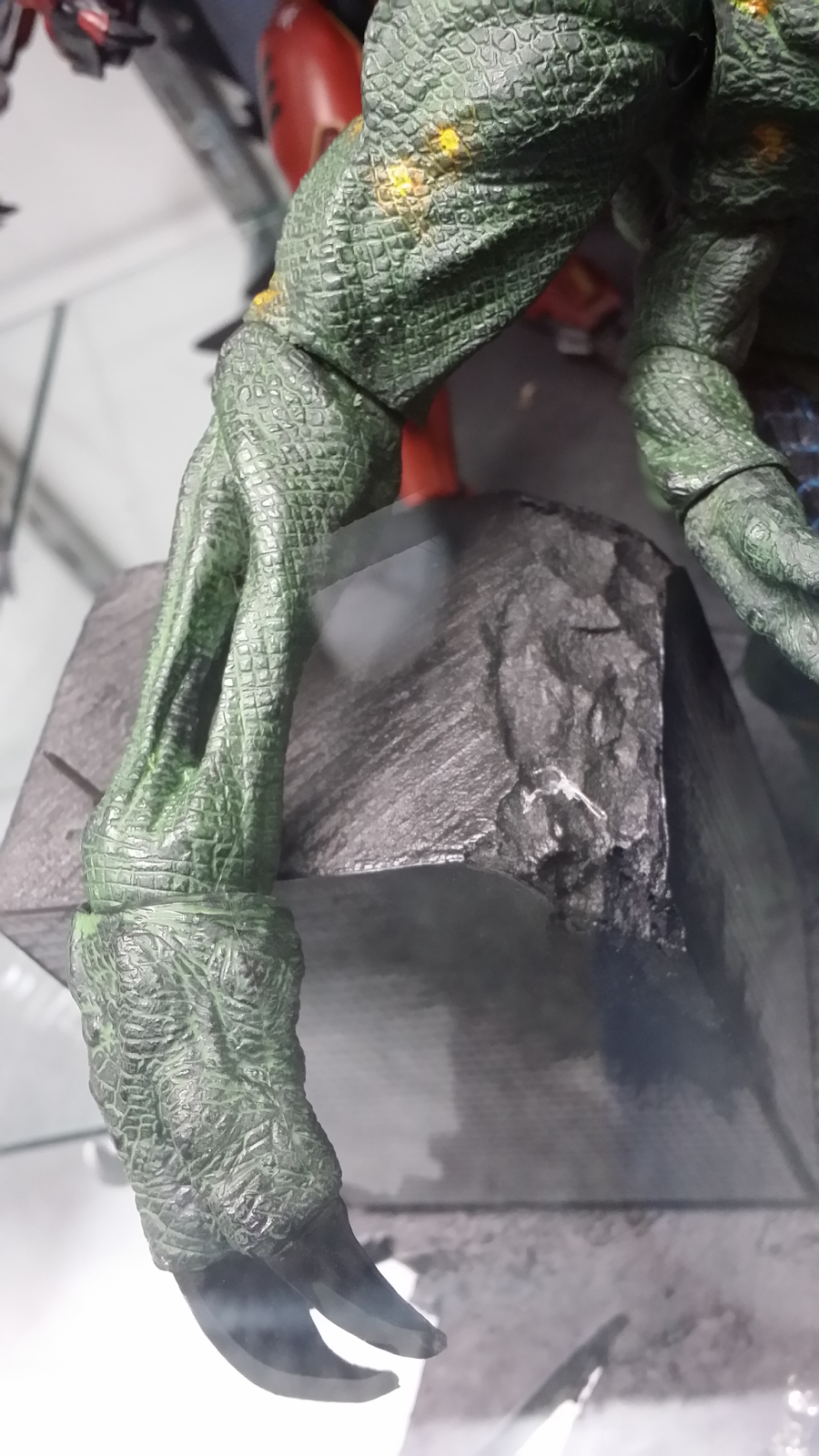 Trespasser and Knifehead have secondary arms, the hands of which sport four claw-tipped digits... Axehead has secondary arms as well.  Much like Scunner though, they each have three fingers instead of four. 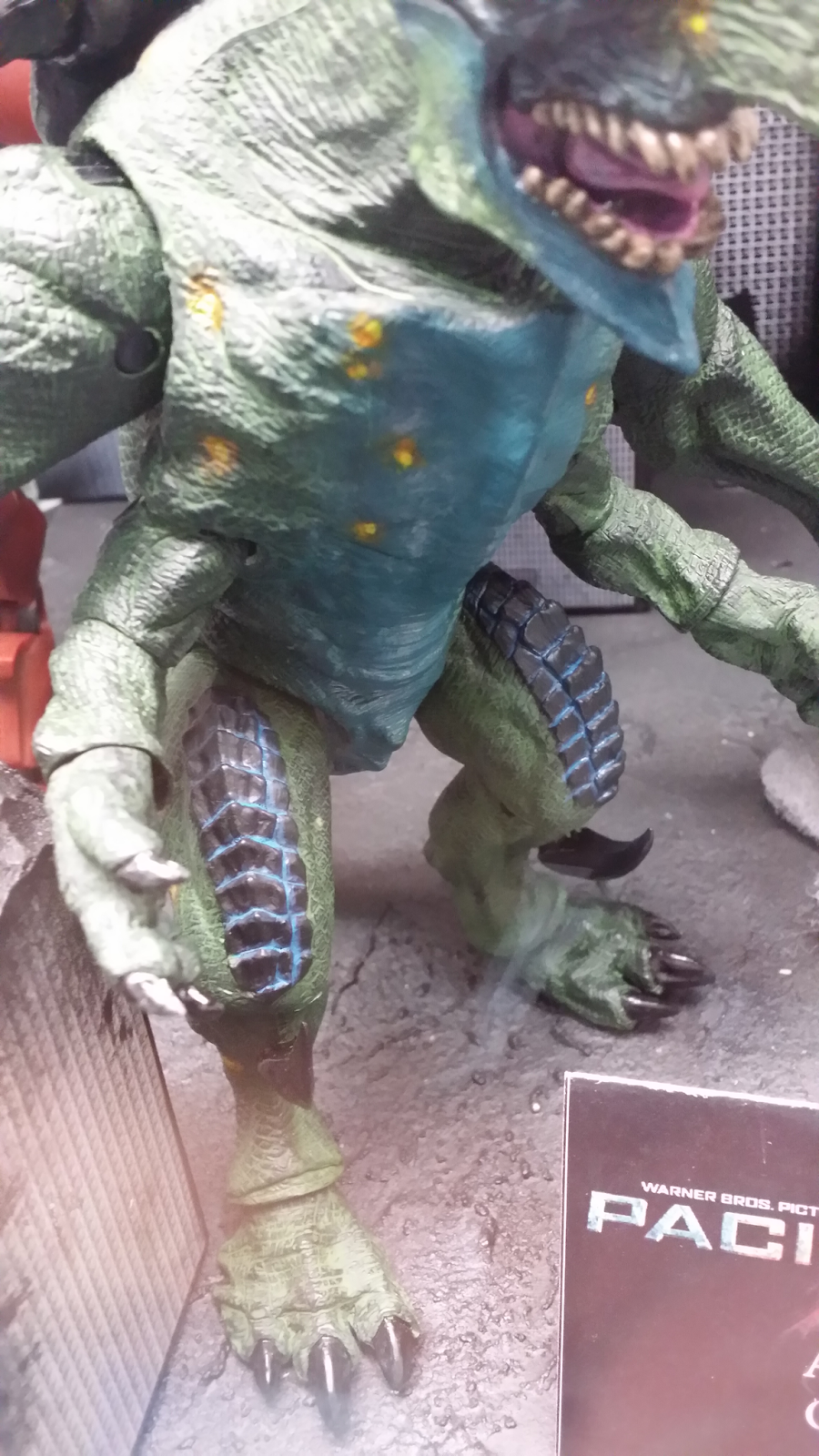 3.  A Simple Shell Swap?  Or Something More?
Trespasser had an enormous, heavy shell on his back.  As it turns out though, Axehead is trading in this clunker for a sleeker model... Most people would look at this new shell and say "Hey!  That's Knifehead's shell!"  But that's only partially true.  The top section is actually unique, with a broken spike.  This was once again due to the early concept that the kaiju were battle hardened beasts.  The broken shell can be seen clearly in this early image: 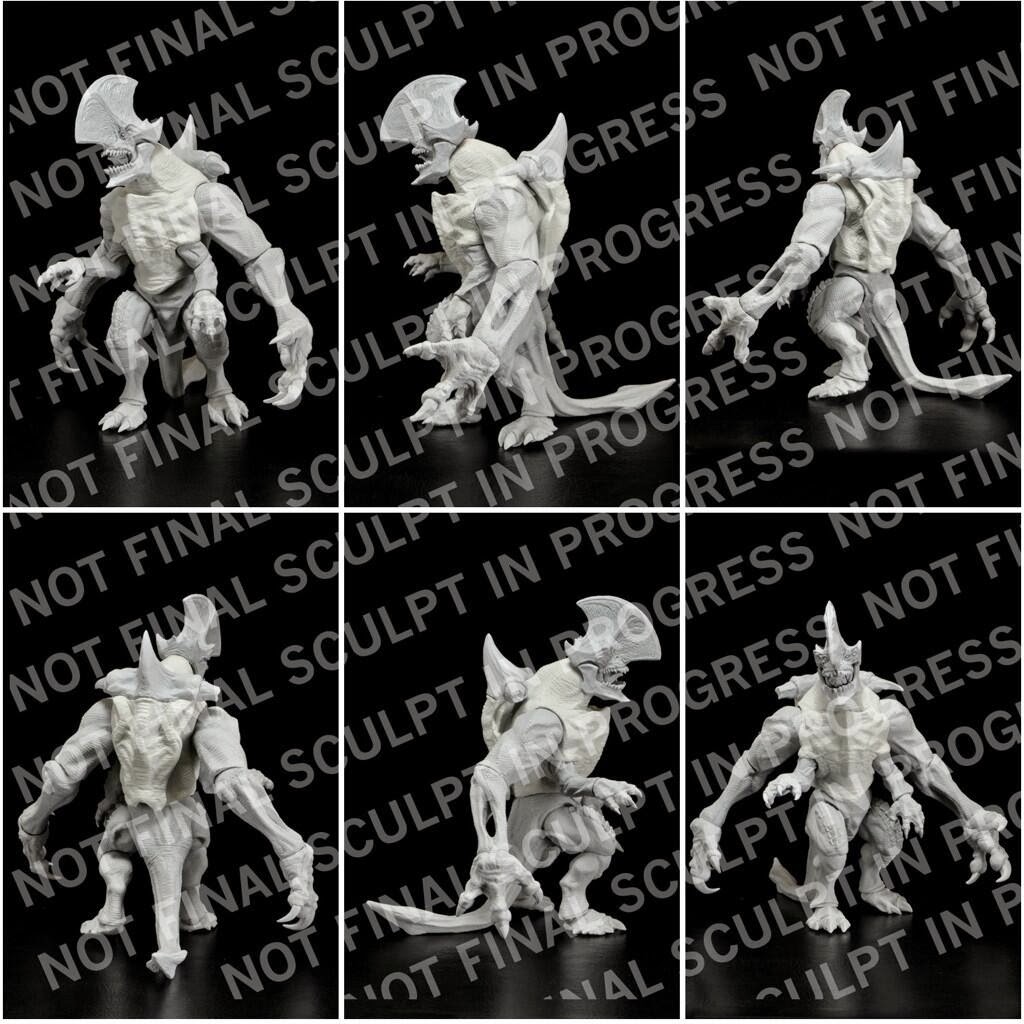 The final and most obvious change is a completely different (and much brighter) paint scheme.  This figure is certainly going to stand out among his drably colored brethren. The Concept Axehead design comes from this rendering: 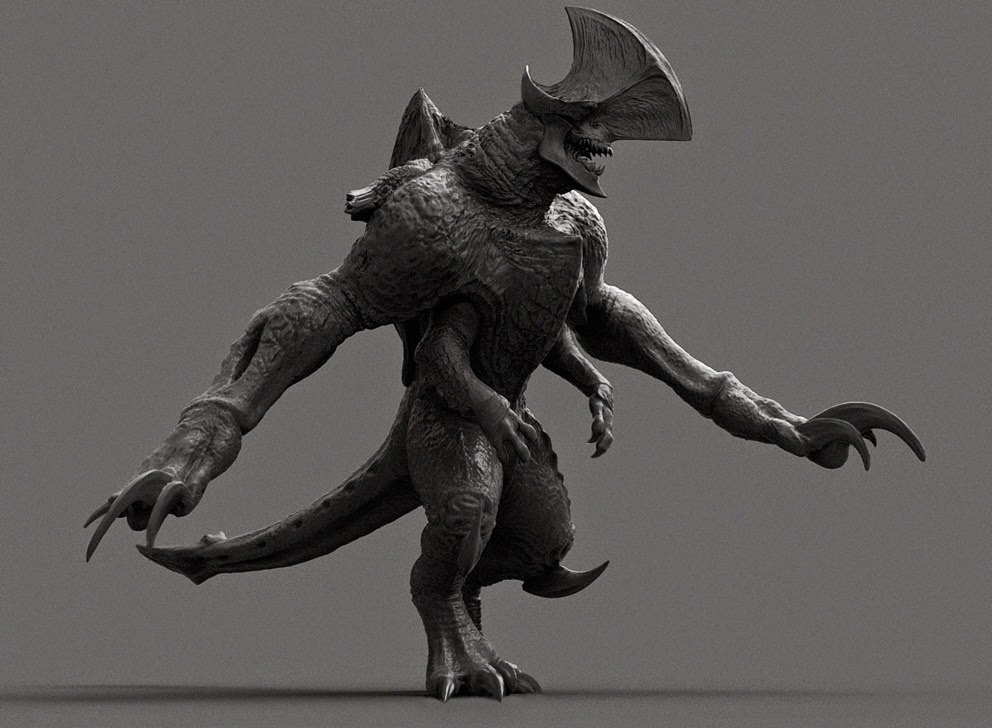 And this Rough Axe Concept: 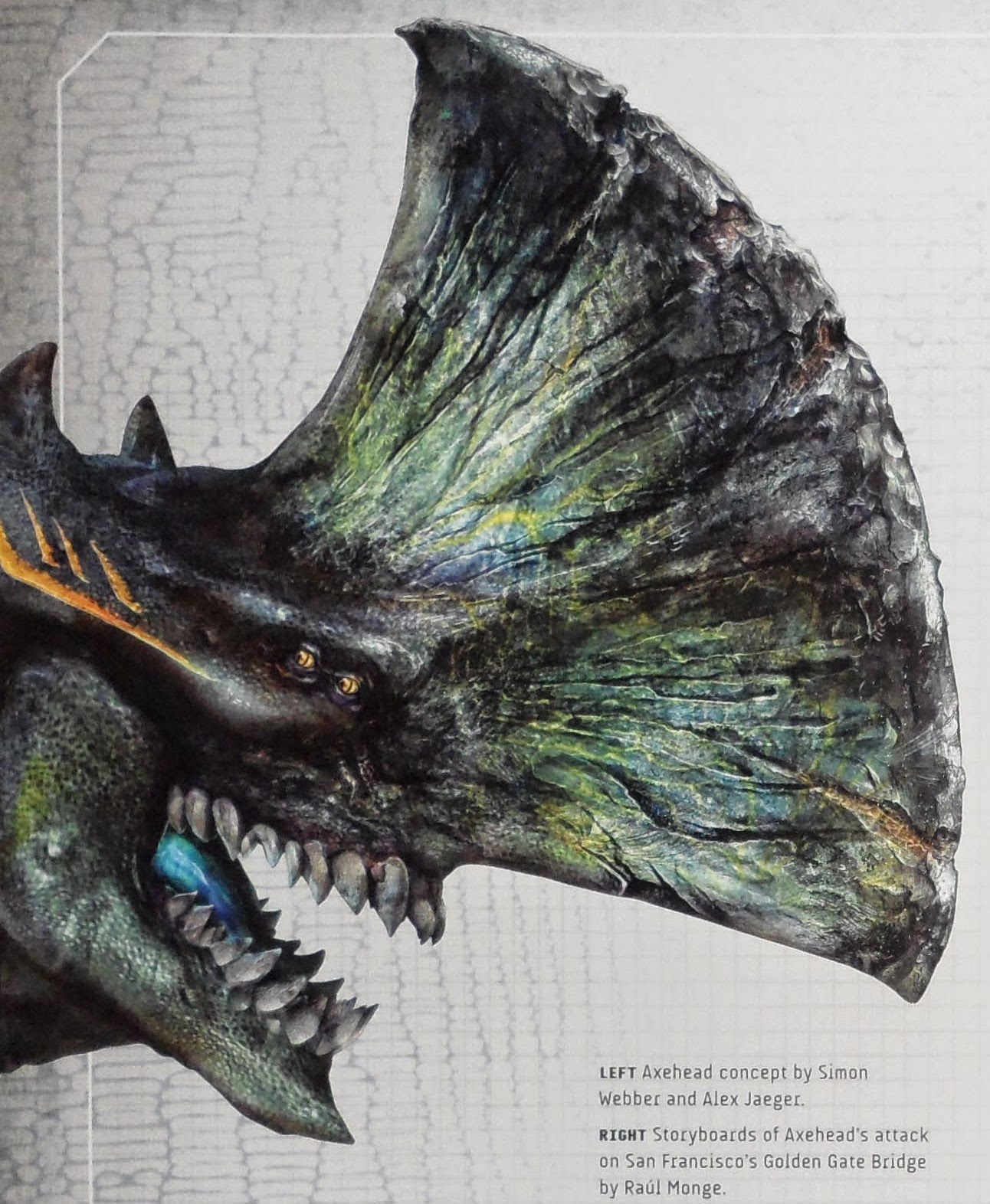 A wide shot of the Pacific Rim display featuring Axehead at SDCC 2014: 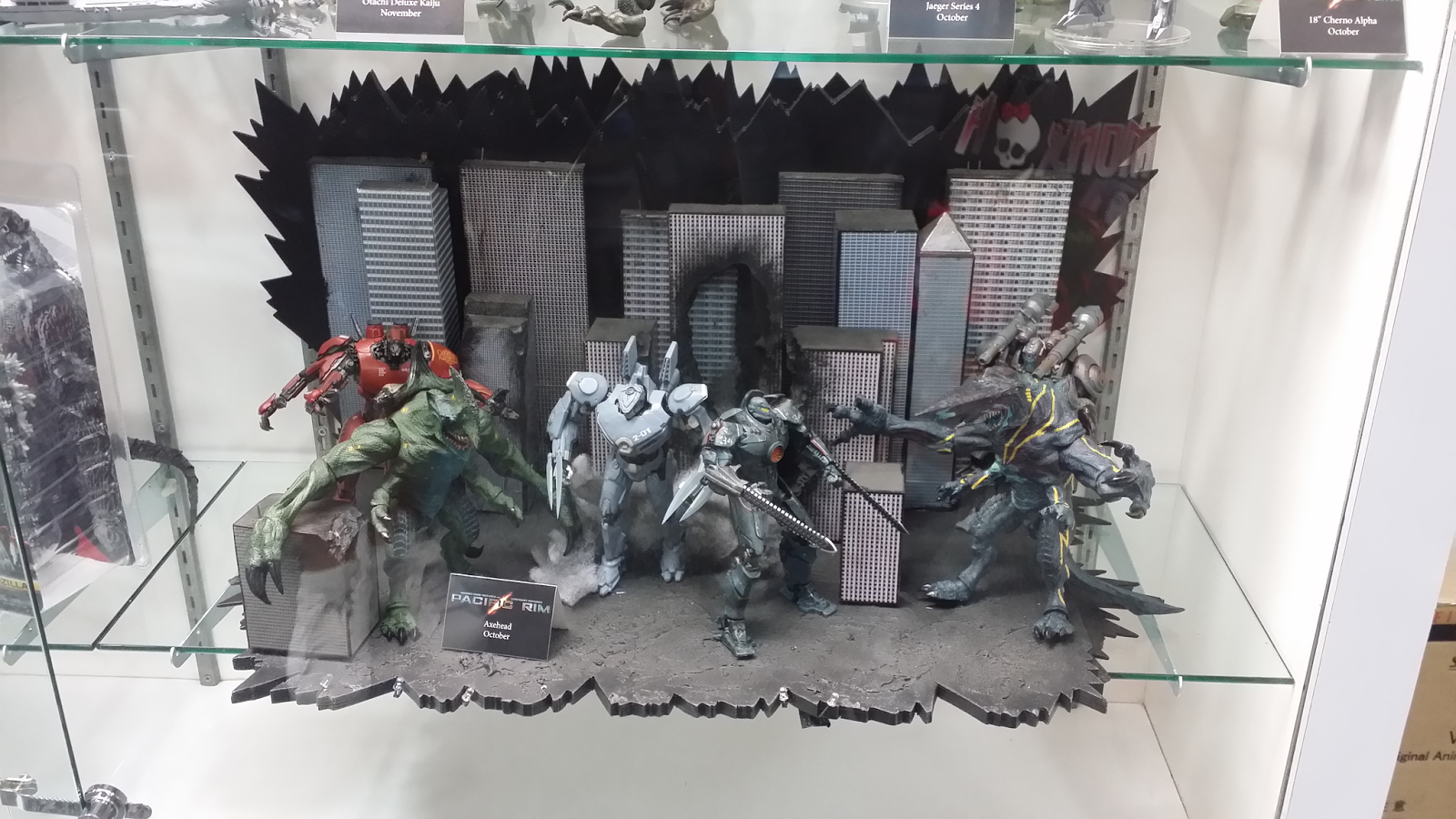 NECA's Otachi is due this November!  As of this writing MSRP is still being worked out. In this shot, it's obvious that Shoulder, Elbow, and Wrist articulation is already planned.  Most likely all will either be ball joints or swivel/hinge joints. 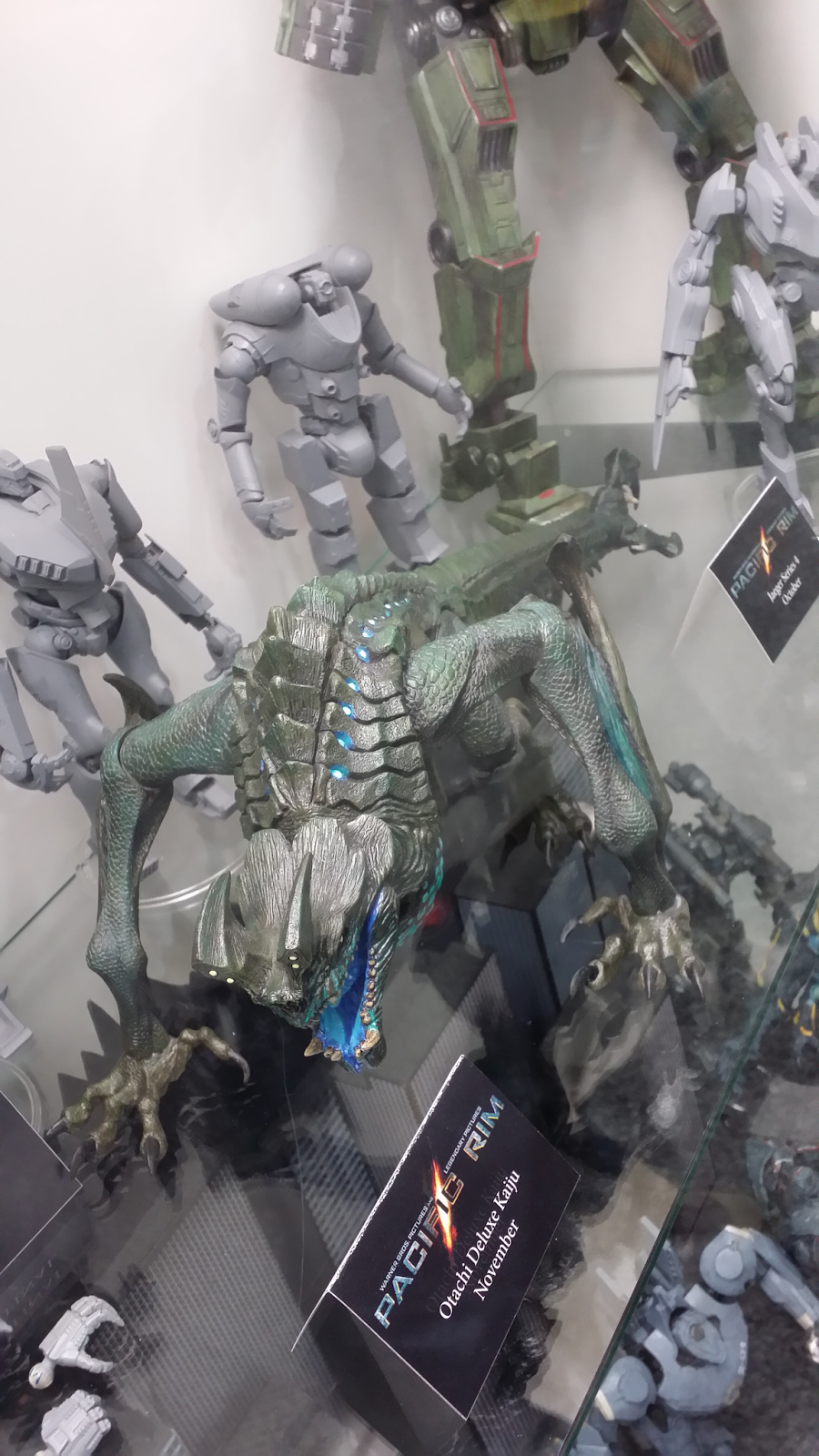 The Acid Producing sac is rendered and painted beautifully on the prototype.  One can only hope it translates perfectly into the production piece. 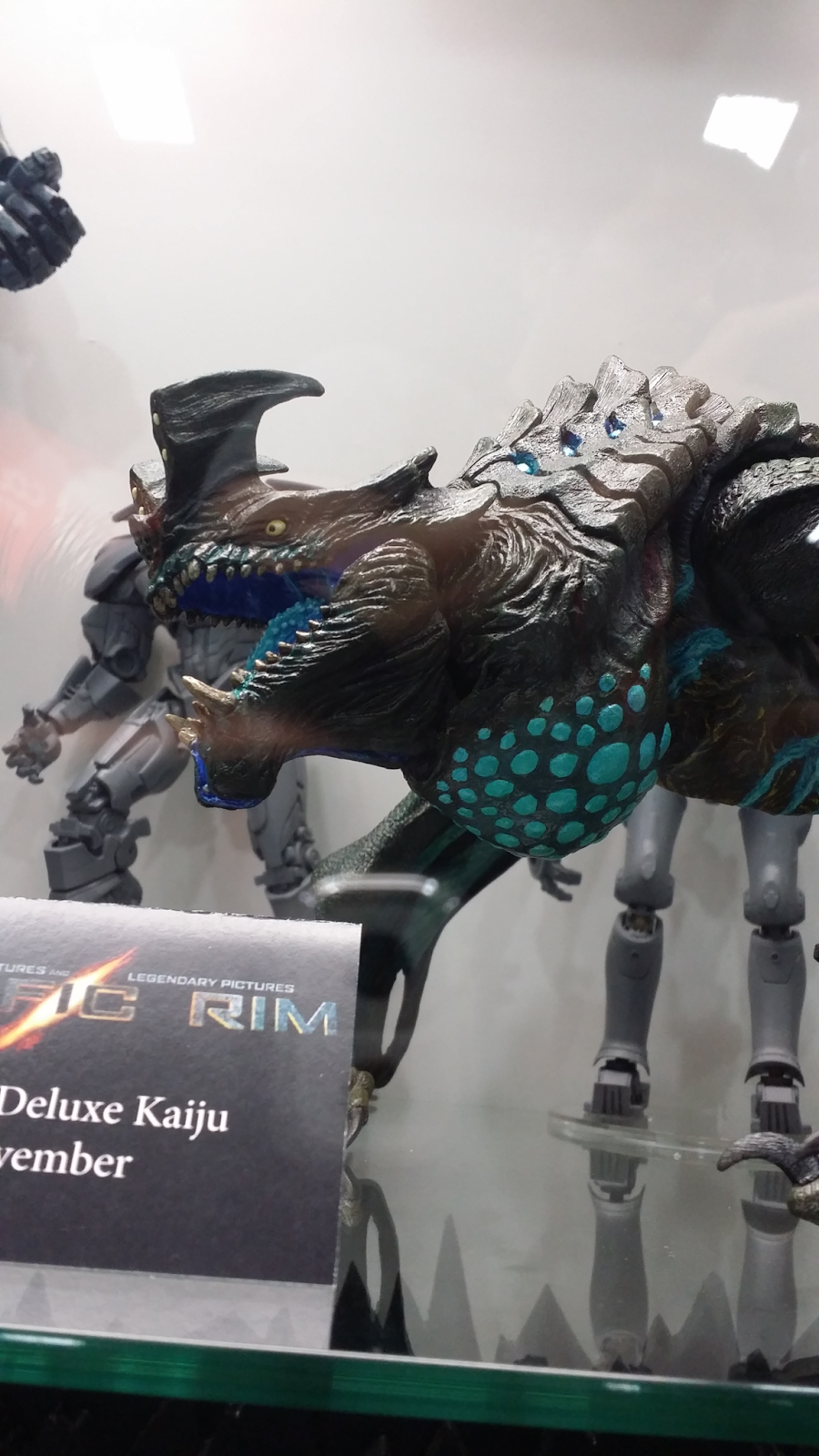 Here an articulation point can be seen at the base of the tail.  Word on the show floor is that Otachi's tail will be fully jointed versus wired.  This is excellent news, as wires tend to be rather temporary. 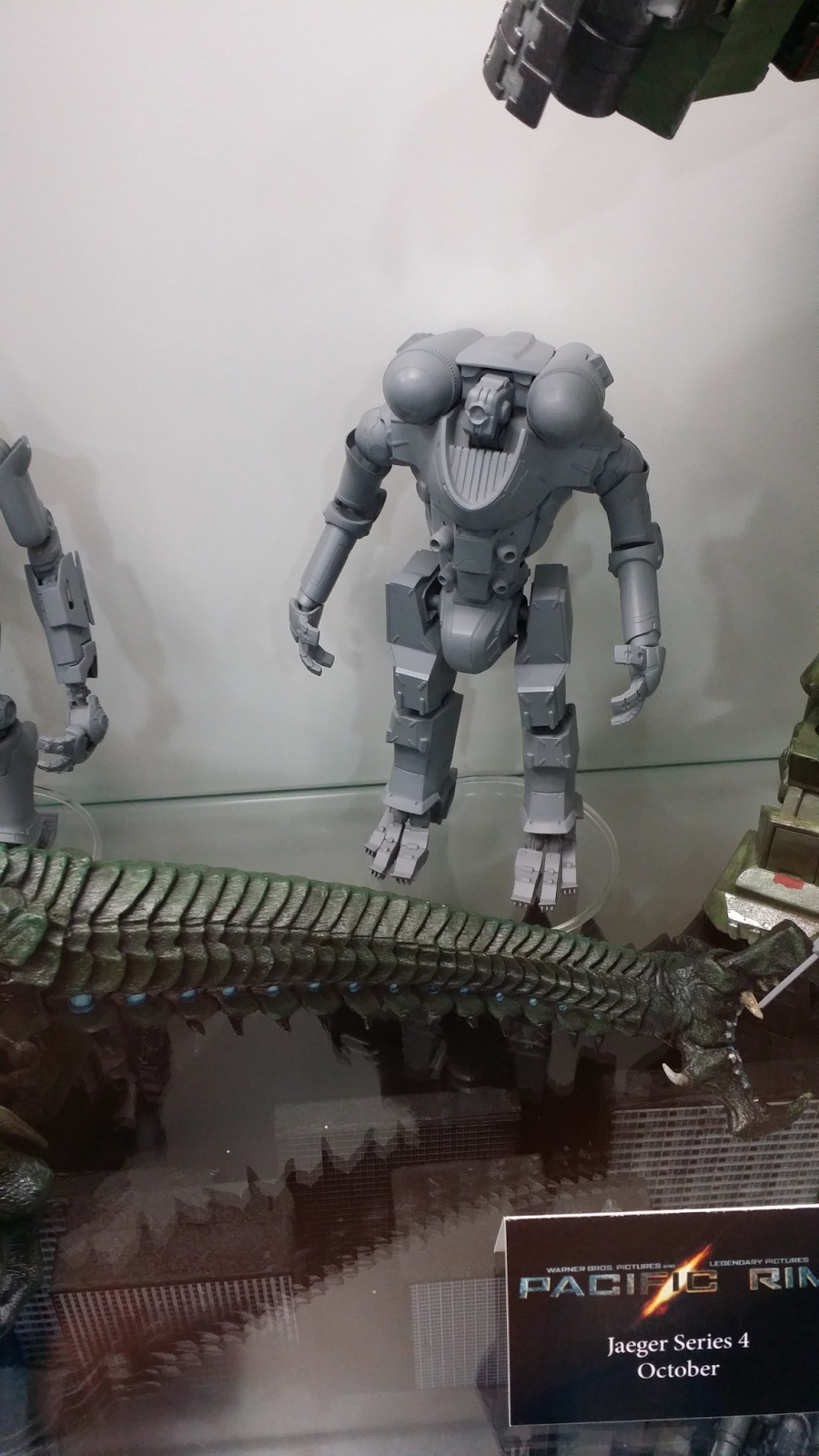 Heard on the show floor (please take with a grain of salt):
*Two (maybe three!) Gipsy 2.0 models are planned.
*The boat sword is not a permanent fixture, but can be swapped with a normal hand.
*One of the Gipsys will come with a chain sword which will supposedly be compatible with the slots on the Battle Damaged Gipsy and the Knifehead 2 Pack Gipsy.
*The Plasma Casters are optional parts
Please Note:  None of these details are concrete, nor are they direct quotes.  These are simply things heard by my source on the show floor.
at 6:48 PM
Email ThisBlogThis!Share to TwitterShare to FacebookShare to Pinterest
Labels: NECA, NECA Week 2014, Pacific Rim, SDCC