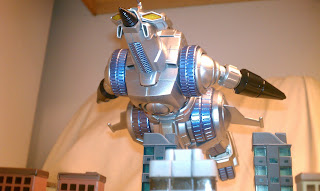 Introduction:  Let's get this out of the way first....  I am NOT a M.O.G.E.R.A. (or Mobile Operation Godzilla Expert Robot Aero-Type.  Catchy, huh?) fan.  At all.  It was one of the more forgettable mechas in the Godzilla franchise, being nothing more than a stiff prop that shot cartoon lasers and the occasional missile.  It also doesn't help that its sole film appearance (In this form) was 1994's much reviled Godzilla vs. Spacegodzilla.  So was it hard to get excited about it when the prototype was first shown?  Absolutely.  Then the preview pics leaked out.  It looked pretty cool, but I was still far from elated.  Then I actually got the figure.  And I got quite a surprise... 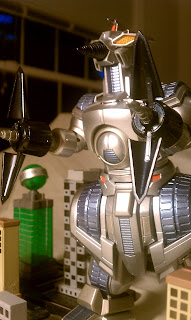 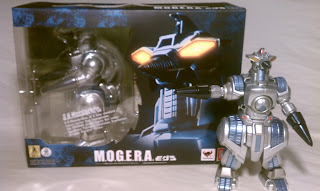 Packaging (5/5):  M.O.G.E.R.A. recieves the standard S.H. Monsterarts packaging, which is still far from standard.  First off, it's huge...  Easily the biggest box yet.  The front has a nice shot of M.O.G.E.R.A.s head with the eyes lit up (note:  The actual figure's eyes do not actually light up), and the back has the promotional pics mentioned above.  On the front left side is a clear plastic window inside which the figure is clearly visible.  All in all, it's a very attractive package. 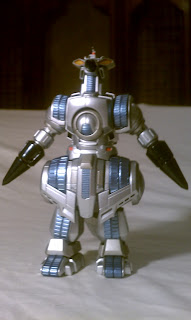 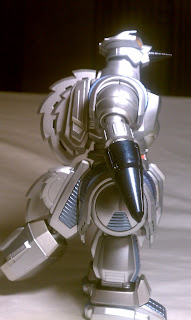 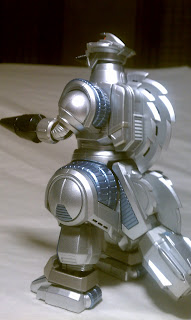 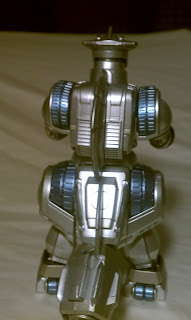 Sculpt (5/5):  The sculpt, to put it plainly, is phenomenal.  It is extremely accurate, right down to the tiny details.  He looks exactly as he did in '94....  Just like a buzzsaw laden robot penguin.  There's not much in the way of textures save the tank treads and the drill on his nose, but again...  that's film accurate.  The detail is very sharp (and I mean literally in some cases...more on that later), and it blows any other figure of this mecha out of the water.

Note:  M.O.G.E.R.A. includes a lot of die cast pieces.  There's metal on the sides of his feet and ankle guards.  His knees and elbows are made of metal.  And his nose drill/beak is metal.  It really adds a lot of weight to the figure. 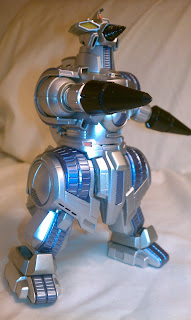 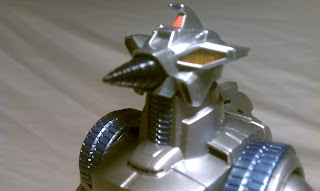 Paint (5/5):  Not a single flaw.  Granted, there's not much paint detail.  Since he's a robot, though, that's to be expected.  The paint is perfect, and get's a perfect score.  I haven't heard of any QC issues with this guy, so I assume it's universal. 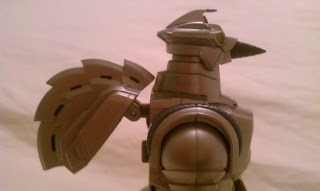 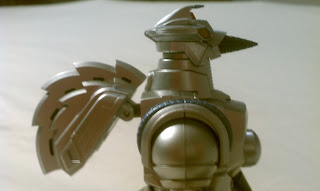 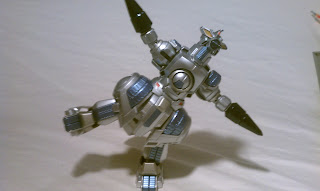 Articulation (3.5/5):   M.O.G.E.R.A.'s design really doesn't lend itself to being highly articulated.  This being said, Bandai/Tamashii still managed to engineer a few surprises.  His head is a ball joint, though it really doesn't function well as a joint at all due to the mecha's design.  However, you can still get a decent swivel range by removing it from the neck and replacing it in the position you want.  And his drill bit nose swivels.  His shoulder armor swivels, and his shoulders are a swivel/ratchet joint combination that essentially forms a ball joint.  This allows an excellent range of motion in the arms.  His elbows are hinges, and his cones are swivel joints.

M.O.G.E.R.A.'s torso is ball jointed.  However, it is again hampered by the design.  As a result, there is a very poor range of movement.  The same problem is apparent with his thighs, which are essentially ball joints.  However, they are covered by a large, stiff skirt, which severely limits the motion of his thighs and knees.  Some working ball joints are also present, though: His ankles and his strange, stubby tail have an excellent range of motion.

There were a couple of surprises in the articulation department. M.O.G.E.R.A.'s entire back/buzzsaw piece can be pulled out and sits on a swivel!  And his hind section above his tail has a decent range of motion too, in order to depict flight mode accurately.

Overall, the articulation is fine for the character.  He can do everything the stiff prop could do in the film and then some.  Still, I feel like the torso and head joints could have had a better range of motion. 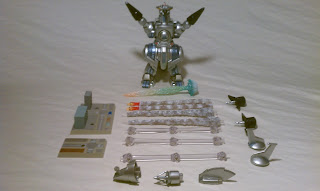 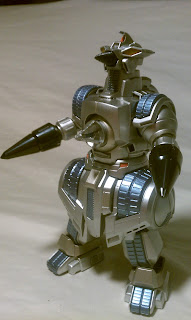 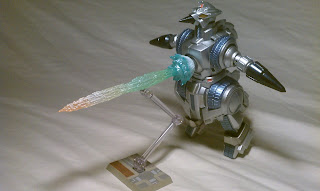 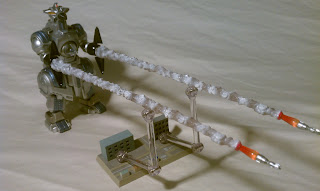 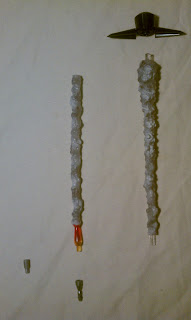 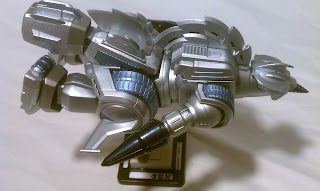 Accessories (5/5):  This category is where M.O.G.E.R.A. really shines!  He is absolutely loaded with accessories, having BY FAR the most of any Monsterarts figure released so far.  Let's start with the weapons.

First off, M.O.G.E.R.A. comes with his ultra powerful chest maser.  It can switch with his normal chest piece by pushing the button on his back, and removing the default piece when it pops out.  Along with the maser comes an effect part to simulate when the he fires it.  It is a brilliant, rainbow colored beam much like Mechagodzilla's.  Like the other S.H. Monsterarts effect beams, it is held up by a clear plastic arm.  The base for this arm is very cool, depicting a city street.  I honestly wish that every figure in this line would come with something like this.

The second weapon M.O.G.E.R.A. comes with is his Spiral Grenade Missiles.  In the film, the two cone-like projections on his arms open to reveal missiles.  Instead of just giving us a separate open cone for each missile Bandai went the extra mile...  They included two separate opening cones that can switch out with the default solid cones!  As an effect part, two long smoke plumes are able to be mounted on another (!!) city street stand....  this one featuring an intersection with buildings!!!  For their part, the SGMs can be removed from the open cones and attached to the front of the smoke plumes.  As a result, (when popped into the peg where the SGMs were in the cones) this makes it look like M.O.G.E.R.A. is firing them out of his open cones!  It is a very impressive effect, and has to be seen in person to truly be appreciated.

Aside from weapons, M.O.G.E.R.A. comes with accessories that allow him to be displayed in flying mode.  First off, his head can be posed in a flying position by popping it off the default neck and placing it on a flying neck piece.  A panel on his hindquarters can also be removed and replaced with a huge buzzsaw panel.  Finally, circular panels on his thighs can be popped off (by pusshing them) and swapped out with small wings.

One of the criticisms of this line has been the lack of accessories.  It seems
that Bandai/Tamashii decided to remedy this with M.O.G.E.R.A.  A perfect score, to say the least!! 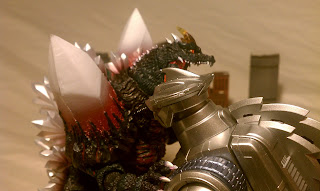 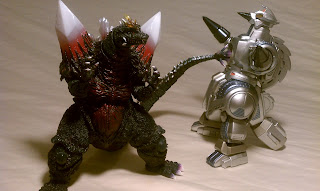 Watch Out!  Pieces of this figure are extremely sharp.  I could easily see a child cutting themselves with M.O.G.E.R.A.'s buzzsaws.  In light of this I'll state the obvious fact that this toy isn't suitable for children. 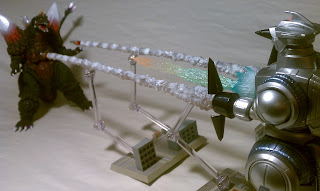 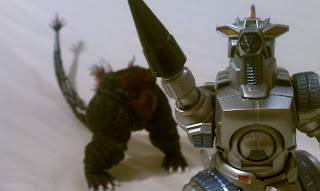 Overall (5/5):  It's one thing to praise a figure of a character you love.  It's entirely another sort of thing when the toy you buy actually makes you appreciate a character that you dislike.  S.H. Monsterarts M.O.G.E.R.A. is a special toy indeed, and I highly recommend him!  This figure just has so much going for it!  Aside from the great, film accurate detail, it also boasts a plethora of great accessories.

at 5:39 AM
Email ThisBlogThis!Share to TwitterShare to FacebookShare to Pinterest
Labels: Bandai, Reviews, S.H. Monsterarts