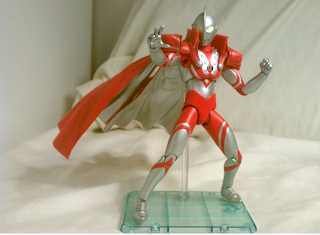 Introduction: Zoffy, referred to as "Commander" by the original Ultraman, Zoffy is a chief of the land of light and the direct subordinate to Father of Ultra. Though he looks similar to Ultraman himself, he is decorated with various metal studs (apparently medals of honor). Apparently no slouch in the combat department, Zoffy has appeared time and again to pull an Ultra's ass out of the fire.  Now he gets his due in the high end Ultra-Act line.  How does he stack up?  Read on and find out! 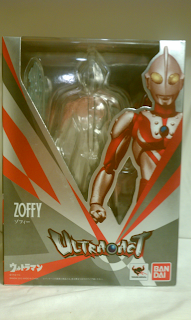 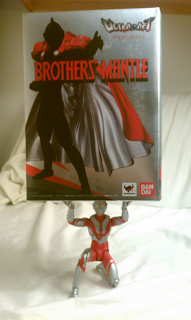 Packaging- Zoffy(5/5), Brohers' Mantle (5/5):  The packaging for both of these items is perfect!   Zoffy's package is a glossy red and silver box with a large photo of the figure on the right side, as well as a see through section to display the figure itself.  On the back there are several promotional shots of the figure.  All in all, it's very attractive and there's no mystery as to what you're getting inside.  The Mantle's packaging is equally attractive, with a clear graphic of the Mantle being worn by an Ultra silhouette.  The back shows the set contents and a very attractive pic of the Ultra Brothers all wearing the Mantle. 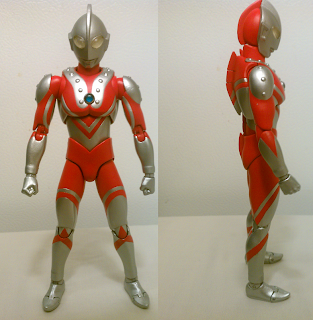 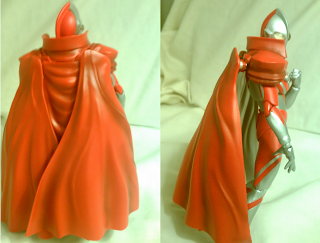 Sculpt-  Zoffy(4/5), Brothers' Mantle(4/5):  Tamashii rarely sculpts a true miss, and Zoffy is no exception.  For the most part he looks fantastic, from his mask to the buttons on his chest.  There are a few flaws, however, which keep the figure from receiving a perfect score.  First off, the neck looks very awkward in profile.  It seems as if it has actually sunken into the torso, giving Zoffy a bit of a hunched look.  Second, the shoulder joints hang a bit low, giving the impression of dislocated shoulders.  The Mantle, like Zoffy, is a mix of the bad and the very good.  There are some truly brilliant details sculpted into the mantle, particularly in the collar and shoulder areas.  It truly seems like cloth, despite the fact that it's plastic.  The way it falls on the shoulders is very convincing.  However, it shares Zoffy's issue in that it looks awkward in profile.  The articulation points on the cape break the flow of the sculpt and it doesn't blend well at all.
Paint- Zoffy(5/5), Brothers' Mantle(5/5):  I have no complaints, as there is no paint slop.  Both Zoffy and the Mantle have fairly simple silver and red color schemes.  It's attractive enough and very accurate. 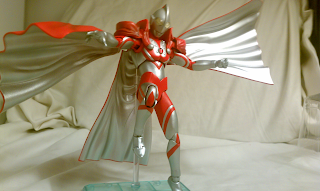 Articulation- Zoffy(5/5), Brothers' Mantle(4/5):  Ultra-Act Zoffy sports all the points of articulation one would expect from this line.  Many of the joints are double joints, and the knees and elbows have a brilliant range.  He can pretty much assume any pose you'd like him to.... save some odd contorting and the ever difficult convincing arm cross.  But hey- he's plastic.  Now the mantle sports 5 points of articulation, including swivel/hinge joints for the left and right cape pieces!  The shoulders are articulated allowing the arms to raise and lower without sacrificing the aesthetic.  All in all, it is well engineered and definitely worth picking up for the Ultras it's compatible with.  Which, until July, only includes Zoffy.  One flaw mars what would otherwise be a perfect score:  The middle cape piece is a mere swivel joint... not swivel/hinge joint.  This hinders some poses, including ones where the cape is supposed to blow to one side. 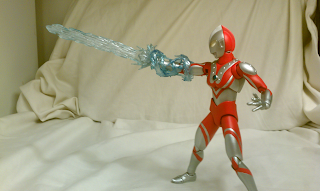 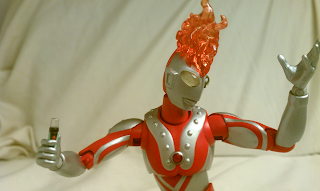 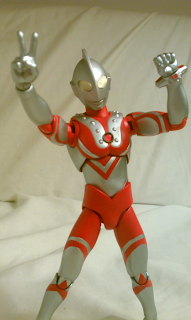 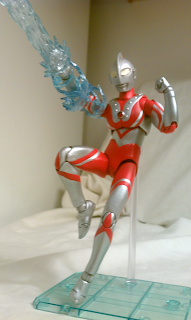 Accessories- Zoffy(5/5), Brothers' Mantle(4/5):  Zoffy came with a great amount of accessories including:  Several sets of alternate hands (his default fists, chop hands, grappling/lifting hands, a peace sign/ "Ya ta!" hand, and a holding hand), a Beta capsule, the Ultra Converter bracelet, a peg that can be swapped out with a piece in his back to fit him on a Tamashii stand (see below), a swappable red Color Timer, a flaming head piece (for unfortunate encounters with flame spouting chicken beasts), and last but not least, his deadly M87 Ray w/dramatically awesome energy swirl effect.  The Mantle comes with a sole accessory:  A Tamashii stand.  Seeing as it's an accessory itself, though, I can't be too hard on it. 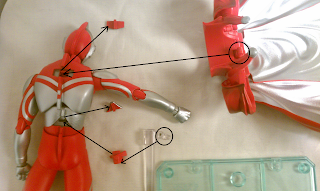 Watch Out!  Be careful when swapping out Zoffy's hands.  The pegs are absurdly thin and I have had snapping incidents with other Ultra-Act figures.
Overall- Zoffy (4.5/5), Brothers' Mantle(4/5):  In the end I recommend Zoffy on one condition:  That you can get him for a decent price.  The scalpers are running wild with this one, and I hardly feel that it's worth $60 plus.  Overall it is a great representation  the chief,  I also recommend the Brothers' Mantle, as it looks great on Zoffy.  I'd actually go as far as to say he looks a lot better with it on than on his own.
at 7:48 PM
Email ThisBlogThis!Share to TwitterShare to FacebookShare to Pinterest
Labels: Reviews, Ultra-Act