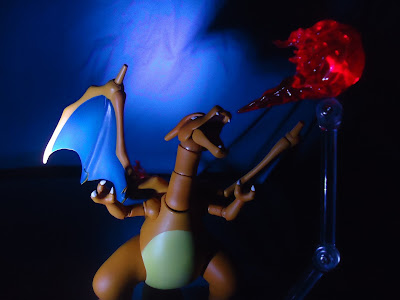 Introduction:  Charizard is quite the popular Pokemon, and is the second Pokemon to be released in the D-Arts line. Coming hot off the trails of Mewtwo, does this figure stand up to the standards that Tamashii Nations is known for? Read on and find out!

Box(4/5): Charizard's box is great, looking similar to the other boxes, with the holographic effect. However, the box is very large for a figure of this size, which almost seems unneeded. 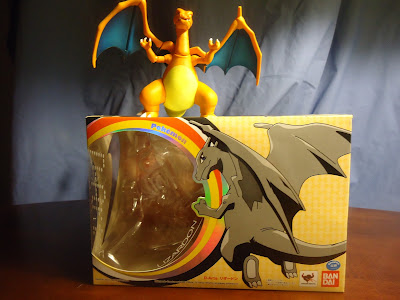 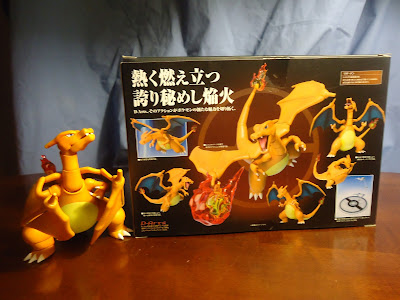 Sculpt (4/5): Much like the other Pokemon D-Arts, it would be hard to get Charizard wrong... though, somehow, Charizard's jaw look not so great from particular angles, and when the mouth is closed. Other than that, the sculpt is spot on.  However, due to the fact the articulation is ever present, the sculpt is a bit shopped up in places, and looks a bit unsightly to some. There are some great idea implemented in Charizard, though; for example, a nice touch given to Charizard's tail is that of a translucent fire effect at the tip. 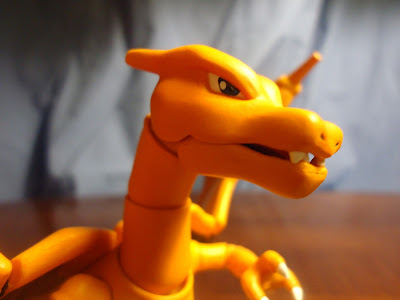 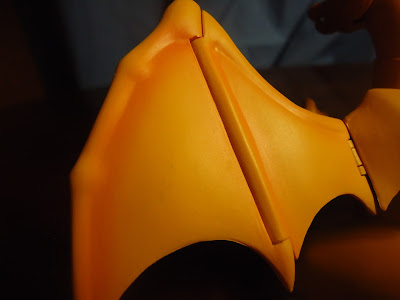 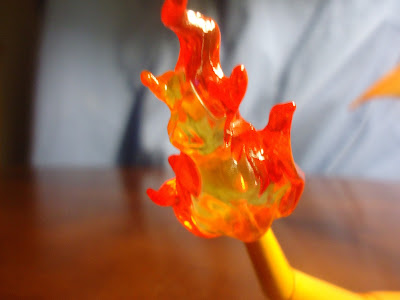 Paint (4/5): Charizard has similar paint to the other Pokemon D-Arts, what with it being a bit chalky. However, Charizard is mostly painted in a fine way, with little to no chunks being present.The shading on the wings and forehead can be a bit much, though, and unfortunately do not photograph too well for this reviewer. 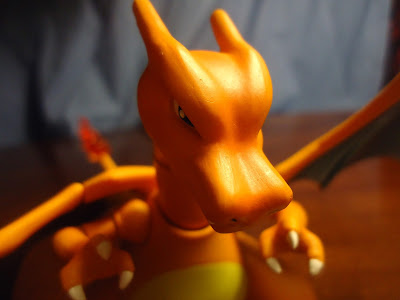 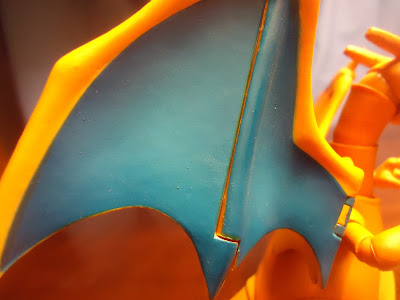 Articulation (4/5):  Charizard has a LOT going for it in terms of articulation; ball jointed neck, tail, hips, knees, hands, and wing bases, hinged jaw, wings, and mouth, and a bicep swivel. Mostly, this is everything a collector could ask for. However, due to the design of the figure, Charizard's true potential for any pose imaginable is not truly reached.
Some really great poses can be achieved, though, and as one can see here, Chariazard does have a series range of movement. 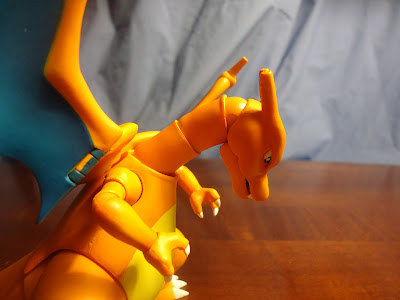 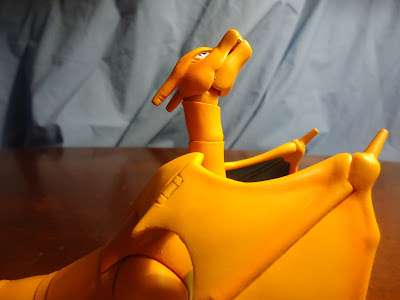 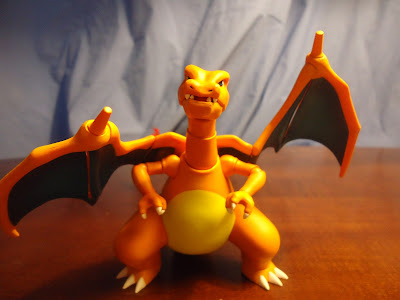 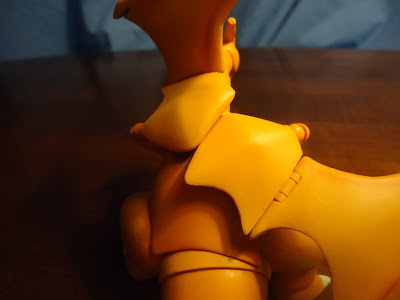 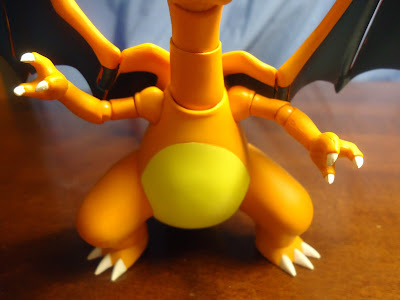 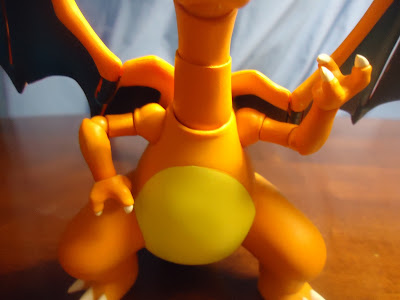 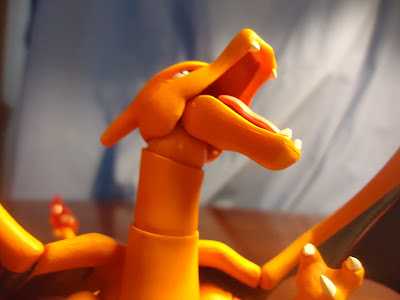 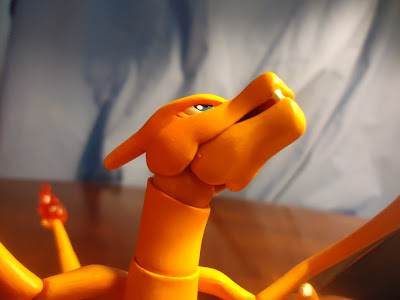 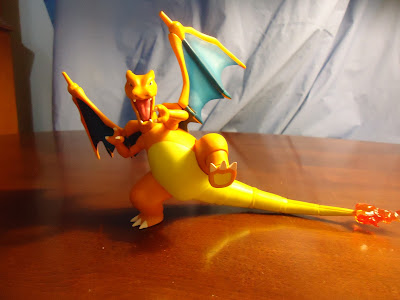 Accessories (3/5) Charizard's accessories are very basic. It comes with a fire effects part, a Pokeball base, an arm, and a claw to help with flight support. The claw given here does not really help Charizard to achieve a flying post, and the fire effect... What is it supposed to be? Ember?A bit disappointing, considering Blastoise comes with what looks like Hydro Pump, and Mewtwo comes with Shadow Ball. A Flamethrower or Fire Blast effects part would have suited Charizard better. Regardless, though, the fireball that comes with Charizard is sculpted well. 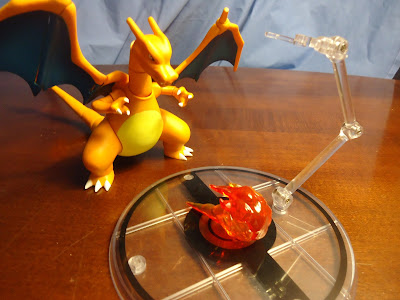 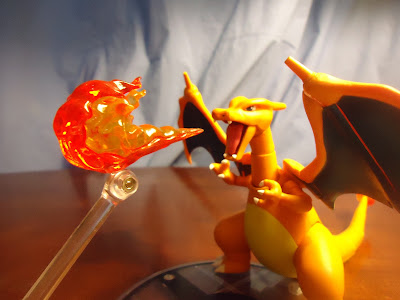 Watch Out!: Nothing really to watch out for with Charizard! Just be careful with the wings, as they may loosen quickly over time, and Charizard's tail like to pop off at random spots for next to no reason.

Overall (4/5): Charizard is by no means a perfect figure, but it is well done. The articulation is fine, as is the paint, but both could use more work in their areas. The accessories feel as if they are just filler to ship Charizard with something,  though the fireball is well done. Fans of this Pocket Monster will like this figure a whole lot!

Now it looks like Charizard is about to face a long standing rival... 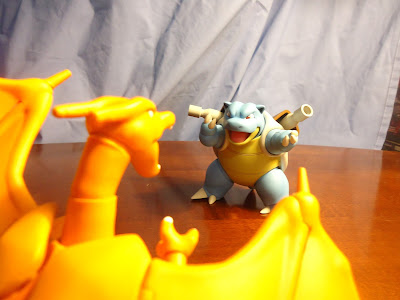 at 5:29 AM
Email ThisBlogThis!Share to TwitterShare to FacebookShare to Pinterest
Labels: D-Arts, Pokemon, Reviews, Theme Week